The Toronto Flood Map can help answer questions for Toronto residents, businesses, tenants, home-buyers, builders, insurance policy holders and insurance brokers / adjusters /actuaries interested in flood risk:
Residents and businesses have reported flood incidents to the City of Toronto after extreme storm events. Calls are made during a flood event or afterward, sometimes as part of an insurance claim related to property damage. The City's map is is shown below.

As shown on the close up of the City's map below, only major roadways and points of reference are available, making it difficult to pinpoint a local area of interest. Unfortunately the City's map is not at a sufficient scale to show local streets with high historical flooding risk.

As a further limitation, May 2000 flood report locations are only shown with a symbol (!) as the original City map did not embed Geographic Information System fonts in the exported PDF file. These symbols are off-set from the reported basement flooding location (red dots in the legend).

Of course there are limitations in interpreting the flood location map:
Nonetheless, Toronto Flood Map can still show the relatively higher flood risk streets within a neighbourhood.  Currently the map shows flood reports for the August 19, 2005 and May 12, 2000 storms. The May 12, 2000 basement flooding locations on the City's map have been corrected / adjusted so that affected streets can be identified.  The July 8, 2013 storm flood report locations, available through other City reports, will be available shortly as will other historical reports reported through local studies.

Bright Planet has explored whether social media could "help in a flood", especially in the context of reviewing tweet data for insurance claims.  Here's what they did in relation to the July 8, 2013 Toronto storm and flood:

"To assist with the vetting and triage of insurance claims, BrightPlanet harvested all tweets within the Greater Toronto Area. BrightPlanet then filtered and curated the tweets down to only tweets discussing specific effects of the flooding. Any tweets containing a latitude and longitude were then mapped in a heat map format in Toronto to show where the most chatter was happening about the flooding."

See the full description on their page here: BrightPlanet.  The harvesed image is here: 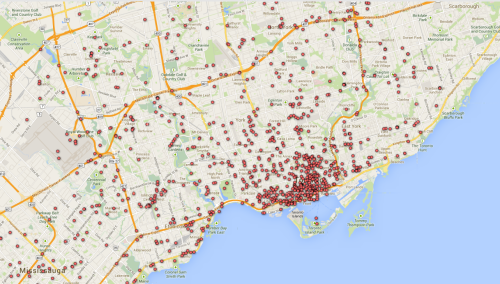 There are a lot of tweets downtown, mostly south of Bloor Street. Matthew Dance analyzed tweets about Toronto - not about flooding, and produced this cluster map: 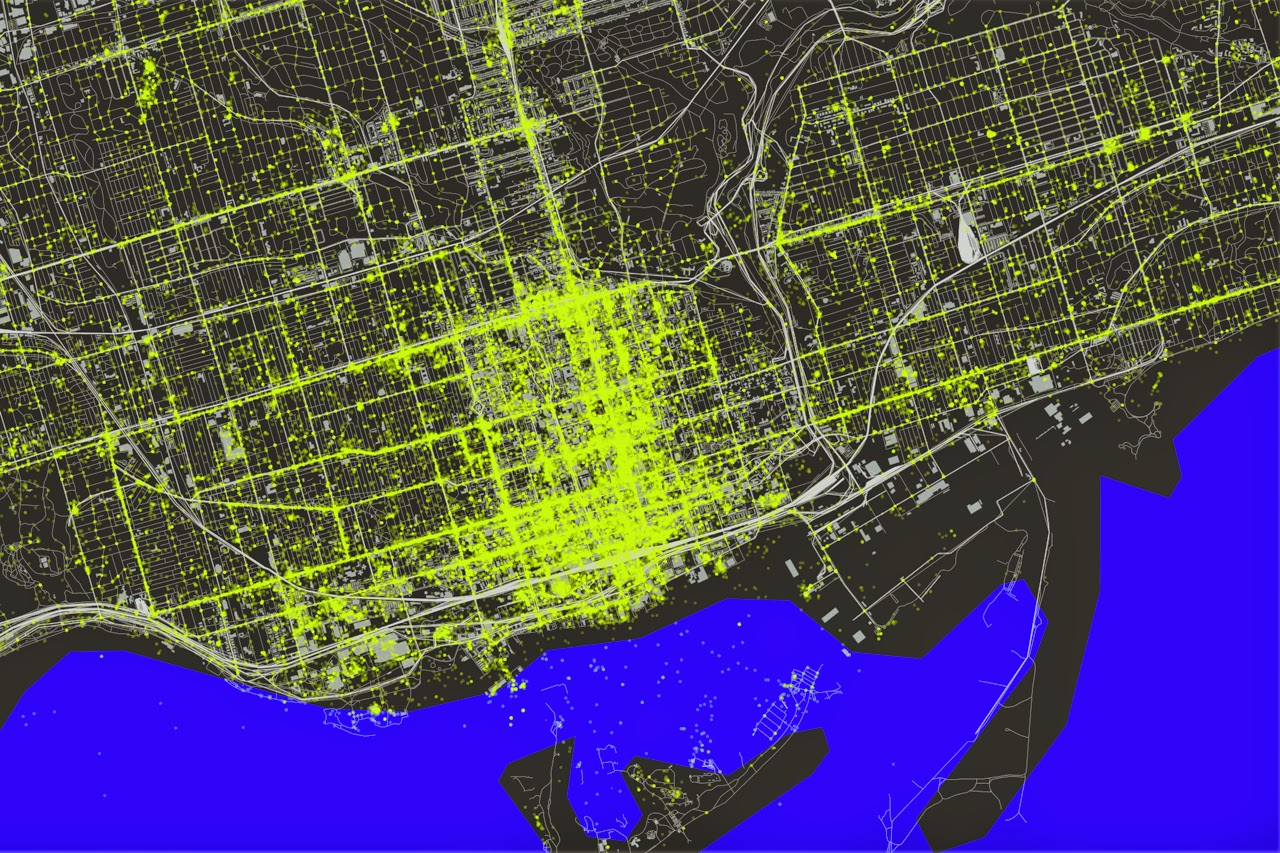 Of course the extents are different, but I'd suggest that we see the same pattern in BrightPlanet "flood tweets" as we do for Matthew Dance's "generic Toronto tweets".  Dance explains tweet density in a few ways:

Where does the City of Toronto report flooding for July 8 2013? It does not match the BrightPlanet flood tweet locations very well as shown below: 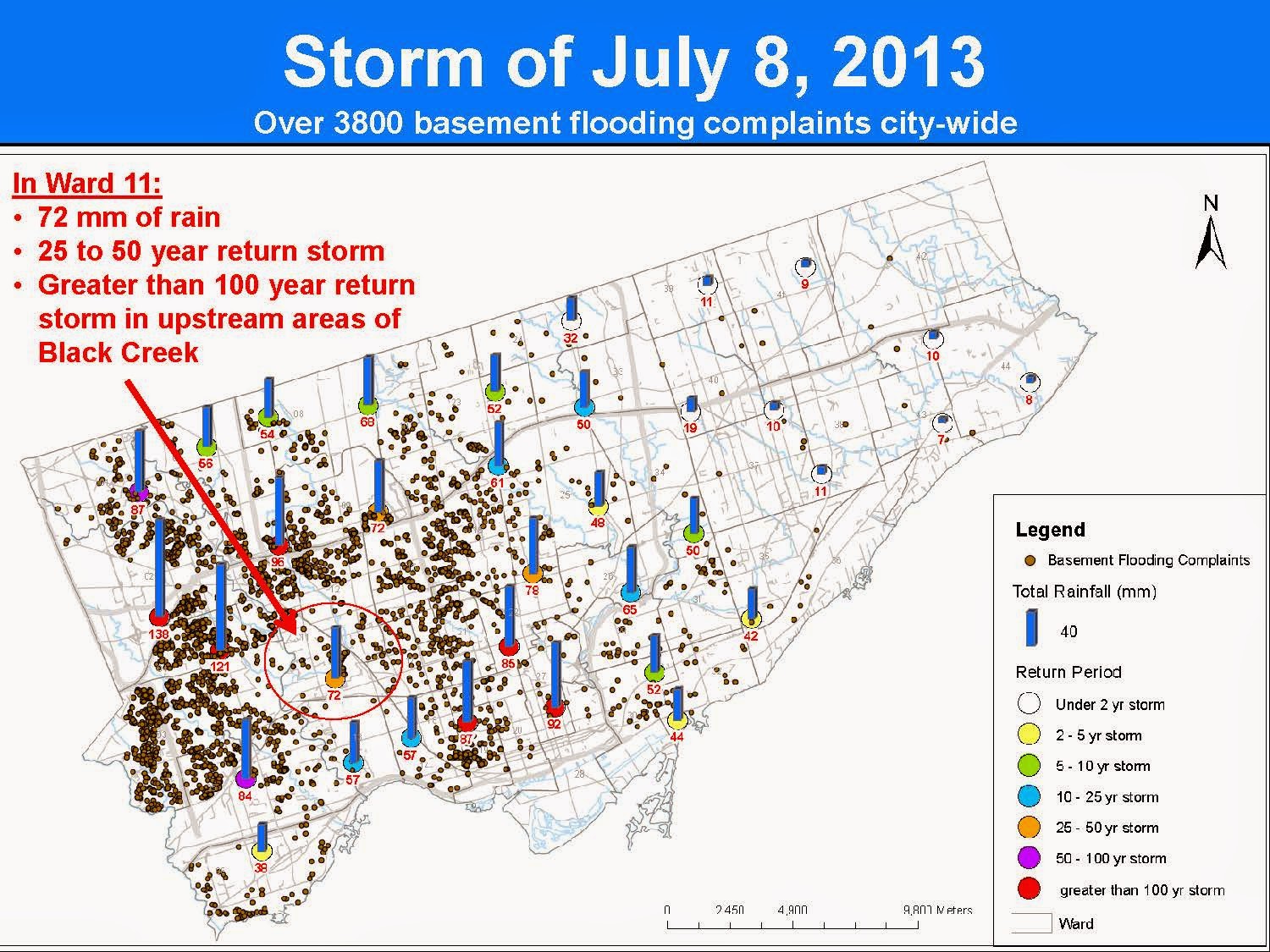 Tweet-rich downtown had only 50 mm of rain and limited reported flooding, compared to 130 mm of rain in tweet-poor Etobicoke where most of the flooding was reported.  Perhaps the BrightPlanet flood tweets should first be "normalized" by the density of generic non-flood tweets, to give a better representation of relative spatial flood activity?

It would also be worth checking if what people tweet more about downtown is spectacular surface flooding (e.g., a sewer geyser blowing a manhole 10 feet in the air, a Ferrari floating in an underpass lake, an amphibious GO Train) as opposed to basement flooding, which is the focus of City of Toronto flood complaints.  Tourist and passersby have time to tweet about flooding, while a homeowner with sewage gurgling up their basement floor drain may have more pressing thing to do (save the family photos honey!).
Posted by Flood Advisor