Canadian Underwriter highlights two flooding events that are ranked "the most expensive natural catastrophes ever in Canada, prompting insured loss estimates well in excess of $2.5 billion".  These events are the southern Alberta flooding and flash flooding in and around Toronto in 2013.  Senior executives of reinsurance companies in Canada were polled on what they see ahead for 2014.

On the topic of flooding. Steve Smith President & Chief Executive Officer Farm Mutual Reinsurance Plan noted:  “Recognizing that Canada is the only G8 country that does not currently provide some form of flood insurance response, it would appear that the Canadian insurance industry is on the cusp of developing and providing an overland flood cover. If the industry is going to pay the claims anyway, let's develop a workable flood model, clean up the wordings, provide the cover and charge for it.”

By overland flooding he means flooding from rivers or overland drainage systems whereby water enters a property through windows, doors and other openings - not basement flooding from a floor drain, which can have flood insurance, sometimes as an option on a homeowner policy. 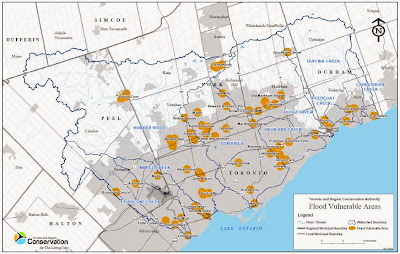 It is relatively strait-forward to identify if a property was affected by "riverine" flooding (that is the uninsured kind of flooding).  This map shows flood vulnerable areas in the Toronto area.  There are numerous locations along major watercourses in Mississauga, Toronto, Markham, Pickering and Ajax.

As an example, lands surrounding Cookville Creek in Mississauga are flood-vulnerable.  The flood risk areas are already defined on floodplain maps - these are estimated based engineering simulations of extreme storm runoff and the resulting flow and flood depth through the valley systems. 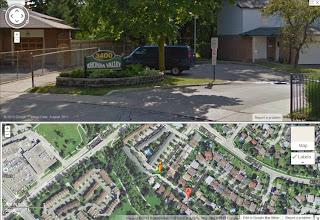 This includes Rhonda Valley properties along the east bank of Cookville Creek shown on the left.  The top image is the Google Streetview in sunny weather while the bottom image shows the floodplain extending up onto neighbouring streets on July 8, 2013. 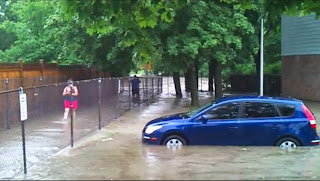 Properties in a floodplain may not be eligible for insurance coverage today because overland flood coverage is not available.  It is possible, however, that overland flooding in one neighbourhood contributes to sewer backups in another downstream that does have coverage.  This can occur when overland flood water enters homes through windows or walkouts and then enters the wastewater system through basement floor drains. These types of inflows can quickly overwhelm the downstream sanitary sewer causing a mix of diluted sewage and flood water to back up in neighbouring basements. 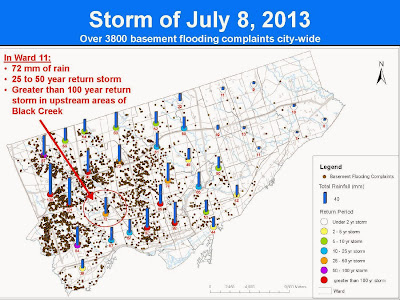 It is more challenging to identify the overland flood risk beyond valleys where floodplain maps are available. As the following image will show, during the July 8, 2013 extreme rainfall in the Toronto area, flooding was not concentrated along valleys - it was reported on "table land" where runoff overwhelmed the major drainage system (roadways and ditches) and sewers.

Similarly, on August 19, 2005, and on May 20, 2000, flooding in Toronto was also widespread beyond the valley systems (see below).  While estimated floodlines are available for some urban areas beyond the valleys, typically a detailed engineering study is required to identify overland flow risks,  and these are often evaluated jointly with the sewer system capacity.  The Toronto map identifies several of these Environmental Assessment ("EA") project areas. 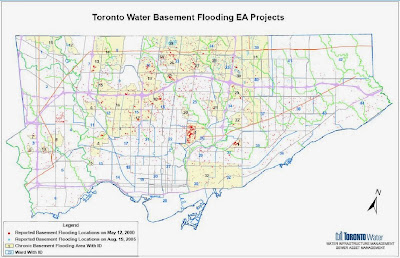 If the Canadian insurance industry is truly on the cusp of developing and providing an overland flood coverage it will have to consider risk areas.  Some risks are already defined through valley floodplain mapping (riverine flooding) while other urban flooding risks on "table land" are not.  Tools are available to estimate the urban flooding risk by identifying low-lying areas and those with large drainage areas without a defined major flow route.  The analysis can be done quantitatively using a good elevation model and GIS-based hydrology tools and can feed into more quantitative assessments of risk.