Connecting the Dots on Climate Data - 100 year storms not increasing

The report released today by the Environmental Commissioner of Ontario indicates "But now “1-in-100 year” storms, which are often the threshold for resilient design, are happening more frequently than in the past."  Well, no data supports that statement.

The graph above has some dots to connect as well - it is real data unlike the Environmental Commissioner of Ontario's infographic non-data, non-science, non-anything useful to anyone:

We see the real Toronto rainfall volumes going down over a range of durations from 5 minutes to 24 hours.

But the Environmental Commissioner of Ontario's infographic has something cyan increasing .. but there are no labels on the axes ... is it real data ... is it past trends? ... is it future predictions? ... is it useful at all to anyone?  That yellow sign and exclamation point can't be good though! Actually this non-data is useless to anyone involved in urban flood mitigation, infrastructure planning and design, municipal design, floodplain mapping, insurance risk assessment, etc.

The most-reported anecdote of 100 year storms happening all the time is North York (north Toronto). This is often repeated by non-science commentators (but not practitioners). But still the plural of anecdote is not data, nor is it actionable.  If North York did get eight 100 year storms in 12 years then someone should have checked the extreme value distribution when they started counting 100 year events, because pretty soon you have to shift your frequency curves up after a few storms, and stop under-reporting the underlying frequency distribution over and over and over.

Here is real North York data at Environment Canada station 615S001 (a composite data record station so its not really one place at all): 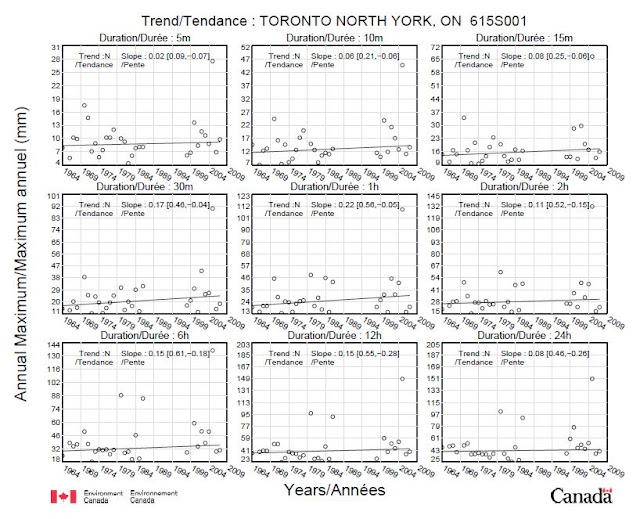 North York is a shorter record and so less reliable on trends than the longer term Toronto City station 6158355 records that had higher rainfall amounts in the 1940's to early 1960's.  Yes there are some upward trends, but like a good scientist, statistician or engineer would do, look at the scale and consider the underlying variability / uncertainty in the data and you will conclude like Environment Canada has done already that there are no consistent or significant trends in rainfall frequency in Ontario or Canada.

The anecdotal North York 100 year storm epidemic is a convenient anecdote for former North York council (pre Toronto amaglamation) and their former planners and engineers, explaining the chronic flooding in a drainage system designed with no major, overland flow outlet, and that has been the topic of engineering study since the late 1980's.  If this chronically flooded North York area with all those 100 year storms (i.e., Toronto's Class EA Basement Flooding Area 28) sounds familiar, is it because physically it is a lot like the south Stratford area along Brydges Street - Elgin Crescent (catchment B23), where the class action lawsuit against the City was won.  That Stratford area also had back to back 100 year storms at the turn of the millennium.  Here is how that Stratford area with all the storms was described in the Beacon Herald 10-years-after-stratfords-watershed-moment:

"On Elgin Crescent we've been dealing with the problem for 20 years," complained Tom Arnott, who suggested the city had shortchanged residents in the southeast end of town.

Frank McLaren said the city should be giving everyone $1,000 to clean up their basements. He told "The Beacon Herald" at the time he was facing a cost of about $35,000 for the third time in three years because of the sewer problem.

City curbside collection teams were busy working extra shifts to clean up debris. Phones were ringing at insurance company offices. And angry citizens who had warned before of the need to do something about the city's aging storm and sanitary sewers began organizing.

The initial outcome was a class action against the municipality that sought more than $200 million in compensation for alleged negligence. That later morphed into a class action spearheaded by Mike Mitchell of the Mitchell Monteith law firm (later Monteith Ritsma Phillips) on behalf of about 800 residents who had experienced losses.

Resolution did not come easily. It was almost eight years after the flood - May 4, 2010 - when an out-of-court deal was reached between the City of Stratford and representatives of the claimants.

So was it a rash of 100 year storms, happening more often, that affected Stratford and contributed to them settling the lawsuit?  Or could it be that as the plaintiffs argued "the city knew about sewer problems and the potential for flooding, based on engineering reports, for three decades and did nothing about it."

Its funny how north Stratford, just on the other side of the Avon River, did not have chronic flooding when the Brydges-Elgin area did with their repeat 100 year storms.  Could it be the overland drainage patterns are better north of the river and there are better slopes?   Yes - as shown in the following paper (see Figures 4 and 7), the chronic flooding areas in Stratford were mostly explained by the topography, and the storms were a convenient excuse for chronic flooding issues:

The Environmental Commissioner of Ontario's report Connecting the Dots on Climate Data in Ontario does a great disservice to the discussion on rainfall trends and causes of flooding in Ontario. The quite worthless infographics and shunning of real actionable data on rainfall, and most disappointing, failure to explore any true causes of chronic flooding in Ontario municipalities, shows that the Commissioner's office is not up to the task of contributing to the important dialogue facing Ontario when it comes to addressing increasing flood damages and effective mitigation.

Speaking of Straford : "Some are born great, some achieve greatness, and some have greatness thrust upon them." ... Shakespeare wrote that, but I think this could equally apply to "foolishness", i.e., some are born fools, some achieve foolishness, and others have it thrust upon them.  If you find value in the  Environmental Commissioner of Ontario's report Connecting the Dots on Climate Data in Ontario, then you may just fall into the last category.

Now that Ontario has given us Connecting the Dots on Climate Data, what is next? Paint by Numbers on Health Care Reform, or Pin the Tail on The Energy Policy? Descartes gave us graphs to plot data in the 1600's - why can't the Ontario government use a few related to rainfall and present real data to build policy on?


The 1981 inquiry into Toronto's Don River flooding sheds light on past railway flooding, including the area of the infamous Metrolinx GO Train flooding on July 8, 2013.  The 81 page report is available at the Toronto Reference Library: 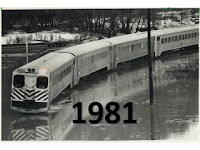 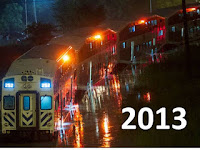 The inquiry report provides a chronology of 40 Don River flood events during both ice-jam and ice-free conditions dating back to spring 1801 when aboriginals could not spear fish for salmon due to the post-flood high turbidity levels.  Railway line damage and flooding during ice-free conditions (i.e., no ice blockage of bridges) was reported in the "Great Flood" on September 13, 1878, the spring of 1914, and during two storms in 1980 (March and April).  Limited flooding was also reported on May 11, 1981 including the area of the Bayview Extension and the Toronto Brick Yards - the stranded GO Train incident occurred was just south-west of the Brick Yards (now the Evergreen Brick Works).  The report indicates that train operation has halted, or trains were detoured during floods, including December 25, 1979, January 11, 1980, March 21, 1980, April 14, 1980, February 11, 1981 and May 11, 1981.

During the March 21, 1980 flood "Part of the CNR track flooded to the north and east of a point south of Bloor Street."  The 20 hour low intensity spring storm produced high runoff as ground in the watershed was partly saturated and frozen.  This area north of Bloor Street corresponds to the location of the July 8, 2013 Go Train flood.  During the April 14, 1980 flood, after a 5-6 hour period of rain, CNR tracks at the Bloor Street ramp were flooded. The GO Train was stranded just east of where the Bloor Street ramp connects to the Bayview Ave.

Today, development in the Don River Watershed is greater, meaning more runoff into the Don River and a greater flood potential. While stormwater management controls in a small portion of the watershed have controlled local peak runoff since the early 1980's, these measures do not control runoff volumes.  Consequently, despite early runoff control efforts, the cumulative impact of runoff volumes have been recognized as factor affecting increased flooding during extreme rainfall (not to mention erosion during frequent rainfall).

As long-term rainfall intensities have not increased in Toronto, it must be acknowledged (as in the 1981 inquiry) that causes of the Metrolinx GO Train area flooding includes i) watershed characteristics that influence the rainfall-runoff process, and ii) hydraulic capacity drainage system including dredging frequency and extent.  Dredging influences were explored in the Keating Channel Environmental Assessment by Acres Consulting, 1983.  Other more recent changes to the Low Don system hydraulic capacity include the West Don Lands landform / berm that restricts flow in former "Spill Area 3" downstream of the rail lines.

Update: Analysis by CityFloodMap.com has revealed that more severe flooding of the Metrolinx rail line occurred less than 6 weeks before the stranded GO Train incident:

As illustrated through these slides, Telling the Weather Story makes a statement on the increased frequency of storms and weather events, indicating that in parts of Canada, events that occurred every 40 years are occurring every 6 years, due to climate change.

The statement on increased frequency is unfounded as (based on ICLR's IPCC source and material and IBC's presentation to the Empire Club of Canada) it is based on a theoretical shift in temperature frequency from a global climate change report, and is contrary to Environment Canada’s actual analysis and data on local rainfall intensity trends.

The Telling the Weather Story statement on increased storm intensity, based on temperature theory has been i) embraced as rainfall facts and research by many organizations, ii) embellished to apply to extreme rainfall, and iii) considered in policy and economic reports.  Organizations promoting the misinformation in the statement include TD Economics, The Toronto Star / thestar.com, CBC News, Canadian Chamber of Commerce, Columbia Institute Centre for Civic Governance, Civic Action, CBC Doc Zone, The Calgary Sun, CanadianUnderwriter.ca, Aviva Canada, Insurance Bureau of Canada.