It is often stated that changes in average conditions are an indicator of changes in extreme conditions. This makes sense for rainfall statistics as a change in typical conditions, such as an increase in rainfall intensities, can be accompanied by higher extreme values as well (i.e., the whole distribution shifts). Since extreme values are somewhat elusive to those recording rainfall intensities at Canadian climate stations - that is, they are rare and may not be readily observed in short records or sparsely-spaced climate stations - we can look at the trends in the more abundant and frequent short duration rainfall statistics as an indicator of where the extreme values are heading.

The Insurance Bureau of Canada and the Institute for Catastrophic Loss Reduction have reported that average rainfall intensities have shifted by an entire standard deviation (thus making extreme 40 year storms become more frequent 6 year storms) - this has been refuted by Environment and Climate Change Canada (see Canadian Underwriter editor's note). The data in the above table indicate no such shift.

It is a commonly held belief that rainfall intensities have increased dramatically as a result of climate changes effects. Recently the Globe and Mail reported "It is hard to ignore the growing relationship between climate change and the resulting impact of severe flooding events." .. actually its hard to explain the role of changing climate given rainfall intensity data in some regions. It may be best to ignore rainfall and focus on other flood risk drivers like urbanization and intensification.

Datasets from Environment and Climate Change Canada refute the belief that rainfall is becoming more extreme. 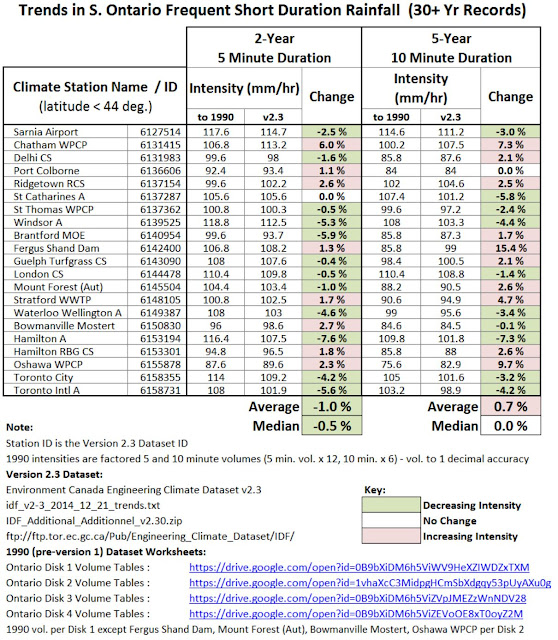 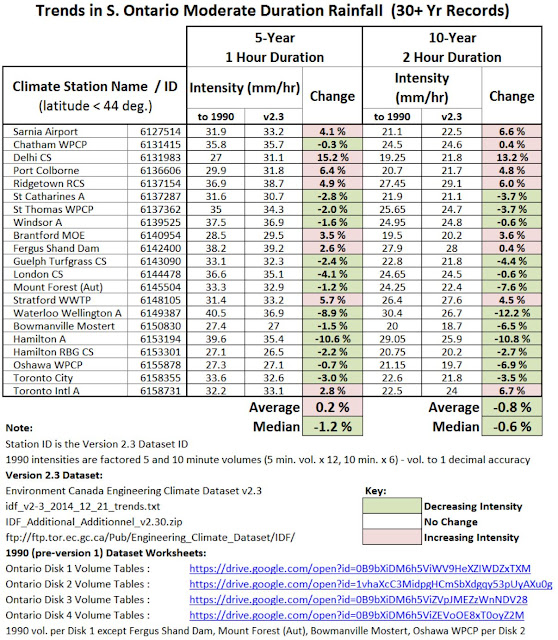 The following presentation to Toronto's Green 13 group explored the role of 'lost rivers' like Ward 13/14 Wendigo Creek and Spring Creek, in driving urban flood risk. Urbanization and intensification are revealed as key factors affecting runoff rates and flood risk. Extreme rainfall trends are shown to be decreasing in Toronto and other long term Ontario climate stations, indicating no impacts due to climate change. Variations in runoff rates are shown to be explained by changes in urbanization that increase runoff coefficients in the Don River since the mid sixties, as urbanization and intensification have increased. Insurance industry claims of more frequent severe weather are shown to be disproved by Environment and Climate Change Canada's Engineering Climate Datasets.