The paper presents changes in typical design intensities for:

i) 120-minute (2-hour) 5-year return period values (e.g., along with intensities for shorter durations, these data are used to design storm sewers in many jurisdictions), and

Future projections are made for the period 2020-2100. The main paper presents percentage changes for the RCP8.5 emissions scenario as follows: 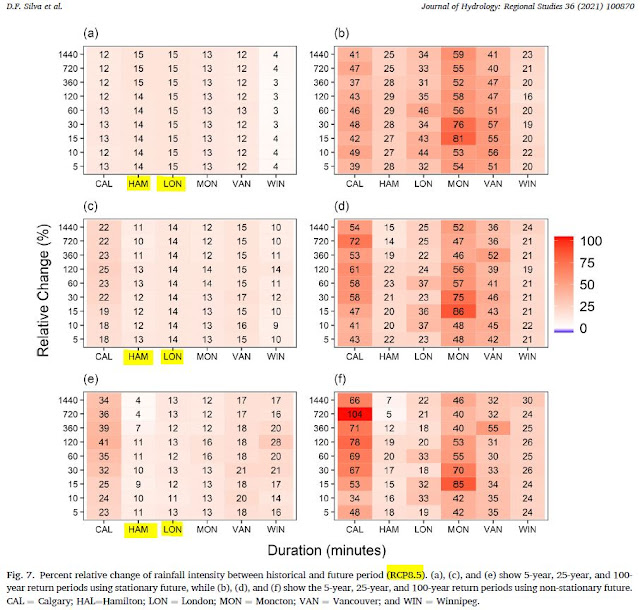 The charts on the above left show changes for stationary distributions, and Hamilton (HAM) and London (LON) columns are highlighted. Those stations were shown to have stationary annual maximum extreme rainfall in the paper, as shared in the previous post. The London and Hamilton 100-year rainfall intensities increase from 4 to 13 percent under the RCP 8.5 emissions scenario (stationary table on the bottom left).

Supplemental material shows that for other emissions scenarios intensities do not increase
at these Great Lakes climate stations for the rare 100-year intensities. See below: 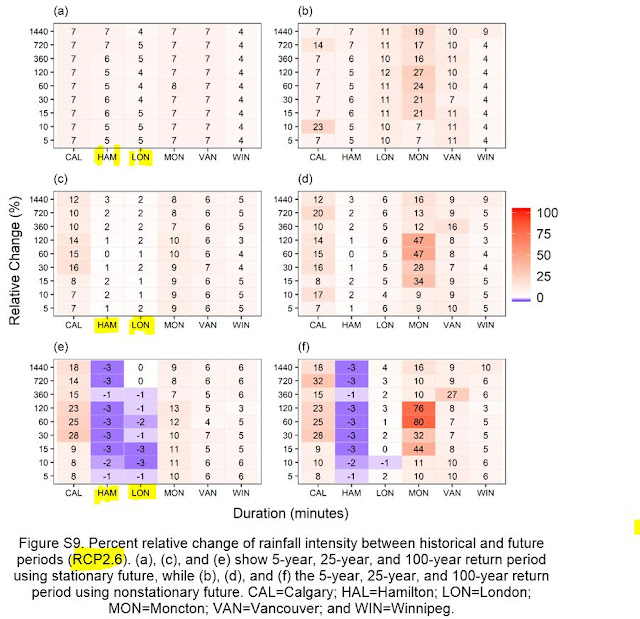 For a RCP2.6 scenario, the 100-year intensities in the table (again on the bottom left for the stationary model), decrease by 3 percent or are unchanged. With those decreases the return period of today's design intensities become longer, meaning today's intensities are less frequent. That means reduced risks for extreme rainfall compared to today.

The RCP4.5 scenario projected 100-year intensities are essentially unchanged in Hamilton and up slightly in London: 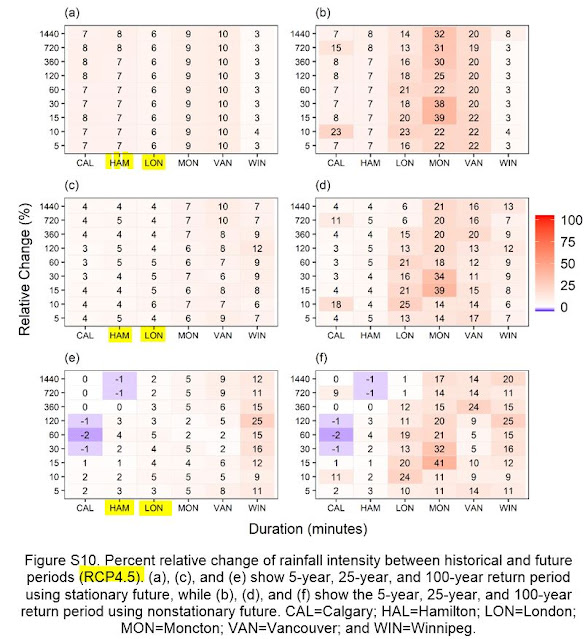 So what are future rainfall intensities in Southern Ontario? That depends on the emissions scenario you select.

Recently the Pacific Climate Impacts Consortium questioned if RCP8.5 should be considered as 'business as usual', that is, is it the most likely future scenario? See a detailed discussion in their Science Brief: https://www.pacificclimate.org/sites/default/files/publications/Science_Brief_39-June_2021-final.pdf, an excerpt which is below. 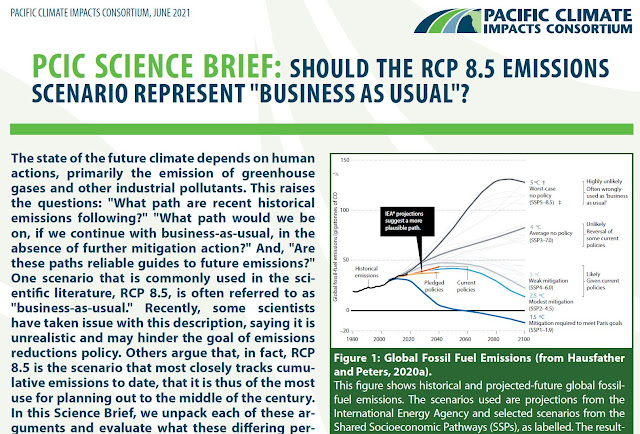 The Science Brief concludes that:
"Given that RCP8.5 is not the most "likely" outcome of emissions following business-as-usual or stated policy intensions, its reasonable to refer to it as a high emissions scenario instead of business-as-usual."
A previous post also noted that others have also questioned the validity of RCP8.5:
i) Roger Pielke Jr. as reported in Forbes (https://www.forbes.com/sites/rogerpielke/2019/09/26/its-time-to-get-real-about-the-extreme-scenario-used-to-generate-climate-porn/?sh=23797f704af0) and
ii) Roger Pielke Jr. and Justin Ritchie as reported in Issues in Science and Technology (https://issues.org/climate-change-scenarios-lost-touch-reality-pielke-ritchie/).
Therefore, the paper's projections for future intensities under RCP8.5 could be considered in stress tests of infrastructure or hydrologic systems. Such tests can identify low-regret design modifications that can be incorporated initially, or to identify future adaptive management if modifications today would be too costly and yield uncertain and limited benefits (i.e., based on the limited likelihood of such severe intensities occurring with less likely scenarios). Assessment of most-likely conditions should consider projected future intensities based on emissions under stated policy intentions, such as presented in the paper's supplemental material (e.g., RCP4.6).
Both the US Federal Highways Administration (FHWA) and the American Society of Civil Engineers (ASCE) have developed risk-based approaches to designing infrastructure for future climate conditions.
The Canadian government describes a method for projecting future rainfall intensities based on temperature-scaling, considering RCP4.5 and RCP8.5 (see previous post  https://www.cityfloodmap.com/2021/12/adjusting-idf-curves-to-account-for.html). The approach notes one should:
A robust risk-based approach could also consider other scenarios such as RCP2.6 as well.
It is noted that the ASCE identifies levels of analysis in its Manual of Practice 140 entitled Climate-Resilient Infrastructure: Adaptive Design and Risk Management. In Chapter 7 Adaptive Design and Risk Management the manual provides recommended levels of climate analysis based design life and risk category. The following table excerpt shows the risk categories for buildings and other structure: 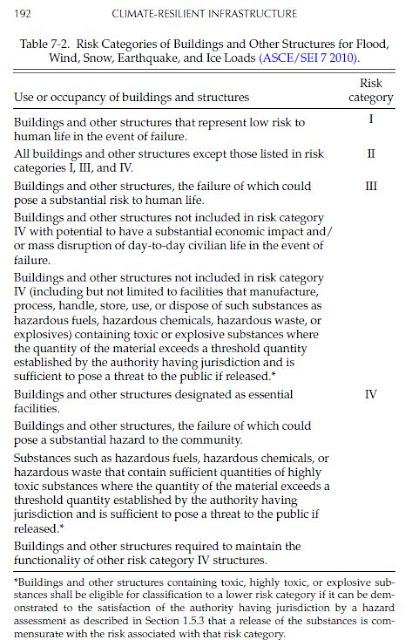 These table excerpts show the levels of analysis based on risk category and design life (top table), and the climate analysis characteristics. 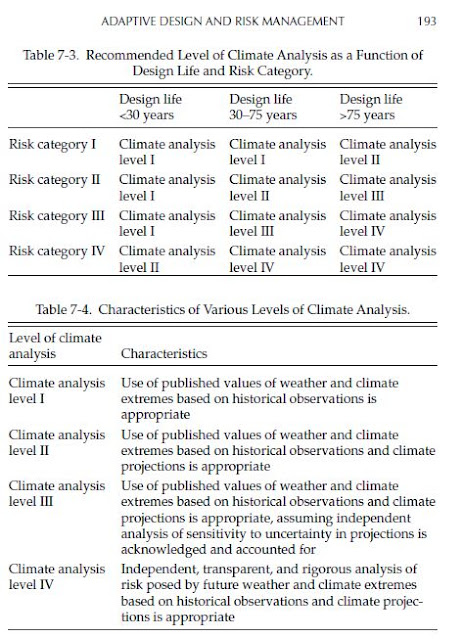 So for buildings and structure with design life up to 75 years, where the risk category is low (Risk Category I, meaning low risk to human life), Level I climate analysis using "extremes based on historical observations is appropriate". For a longer design life beyond 75 years, the Risk Category I buildings and structures (low risk) should also include climate projections per climate analysis Level II. In my opinion, a deterministic future projection could be considered for such analysis based on a likely scenario (e.g., RCP 4.5).
Where there is a 'substantial risk to human life' or hazardous or toxic materials involved under Risk Category III, Level III analysis is recommended by ASCE for moderate design life (30-75 years). Such analysis would account for uncertainty as well, for example, and could consider confidence bands reflecting uncertainty on a future climate projection (e.g., bands surrounding RCP 4.5 projections).
For the highest Risk Category IV that applies to essential buildings and structures that are deemed 'essential facilities' and whose failure could pose 'a substantial hazard to the community', or that involve hazardous/toxic materials, more extensive climate analysis is required (i.e., Level IV). ASCE recommends "rigorous analysis of risk" for moderate design life and longer. Such an analysis could consider a range of scenarios, e.g., from RCP 2.6 to RCP 8.5, and the consequences of exposure to flood hazards. The likelihood of each scenario would have to be estimated to support rigorous risk-based analysis.
Posted by Flood Advisor