The City of Toronto commissioned Toronto's Future Weather & Climate Driver Study - the 2012 results indicate projected changes in extreme rainfall for a few durations and return periods.  Results of the Outcomes Report are here https://www.toronto.ca/wp-content/uploads/2018/04/982c-Torontos-Future-Weather-and-Climate-Drivers-Study-2012.pdf.  The baseline period for the study is 2000-2009 and statistics are predicted out to 2040-2049.

The Engineering Climate Datasets have been updated in early 2019, including for two Toronto-area climate stations with long records called "Toronto City" and "Toronto International Airport".  The following tables compares the predicted increase in extreme rainfall in the 2012 study with trends in the same statistics from 1990 to 2017 at these two Toronto-area stations. 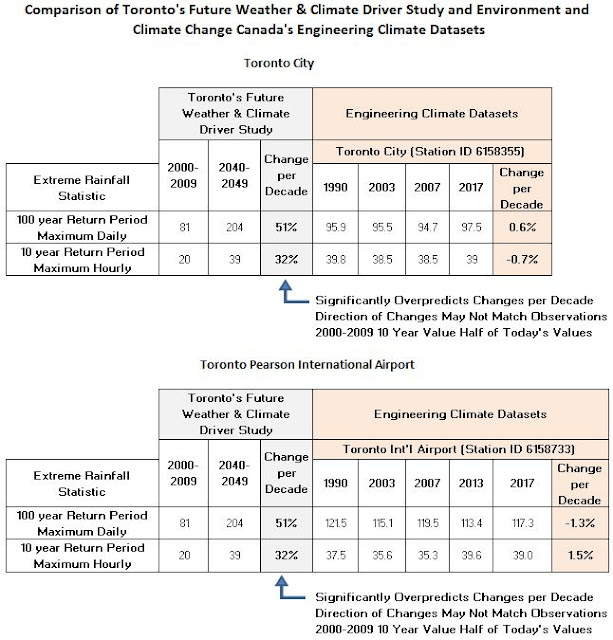 A key take away is that the Future Weather & Climate Driver Study does not agree with the direction and magnitude of changes in the actual statistics, which are based on real observations (not modelling predictions).  Some actual statistics have been decreasing since 1990, not increasing as predicted int eh study.  When a statistic is increasing, it is at a significantly lower rate that what is predicted in the study.

The following chart compares the past 100 year daily data to the study predictions - the Toronto study seems to have a hockey stick shape, jumping significantly upward by the 2040's which does not match the past trends. 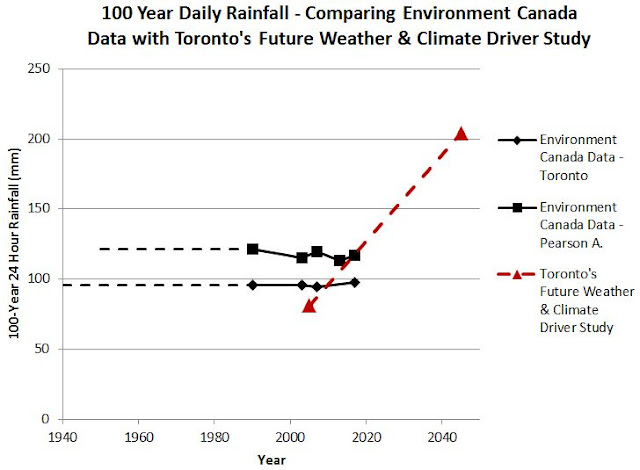 The next chart shows changes in 10 year hourly rainfall. The Toronto study significantly understates the value today, suggesting it will double by the 2040's - the predicted future value has already been in place since the 1990's however. 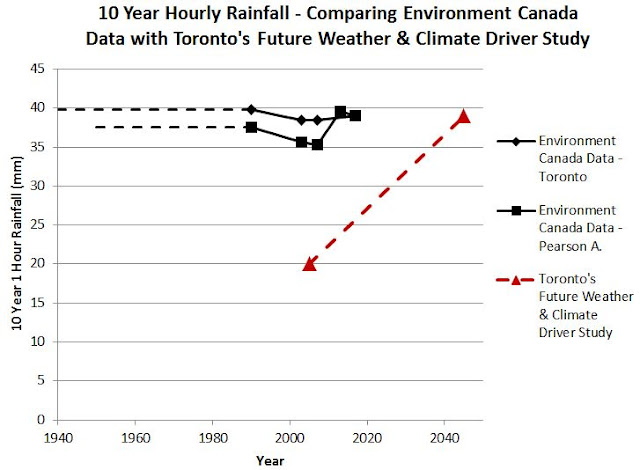 It is questionable whether the City of Toronto should consider any changes to design criteria for municipal infrastructure considering these future predictions - best to follow ASCE's approach and incorporate flexibility in future design and wait and see with the 'observational method'? - if observations show that there is no change in the statistics, there should be no significant driver in changing design criteria, especially based on models that do not match the magnitude or trend in actual extreme rainfall statistics. 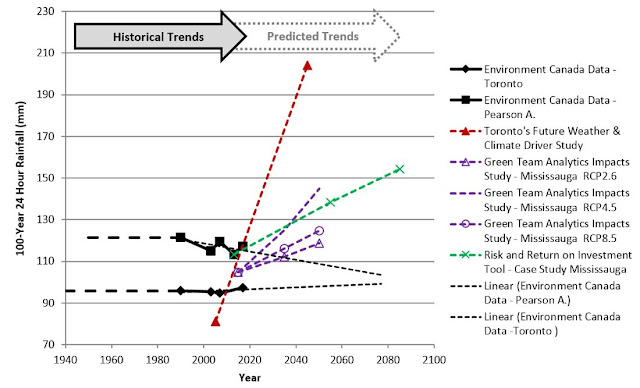 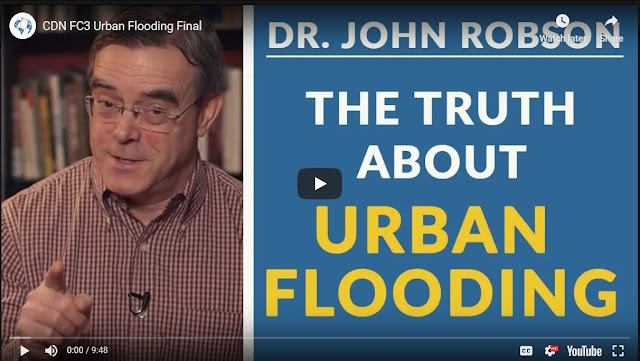 The video notes that we have always had flooding which is correct - that is something we have noted as well, like in this presentation to the WEAO / OWWA joint climate change committee: https://www.slideshare.net/RobertMuir3/infrastructure-resiliency-and-adaptation-for-climate-change-and-todays-extremes 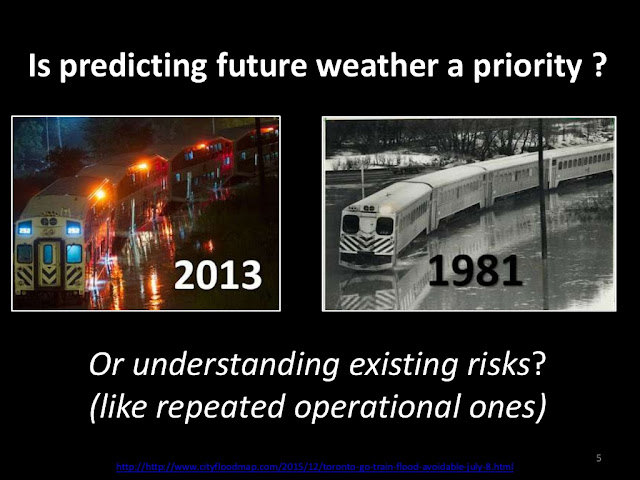 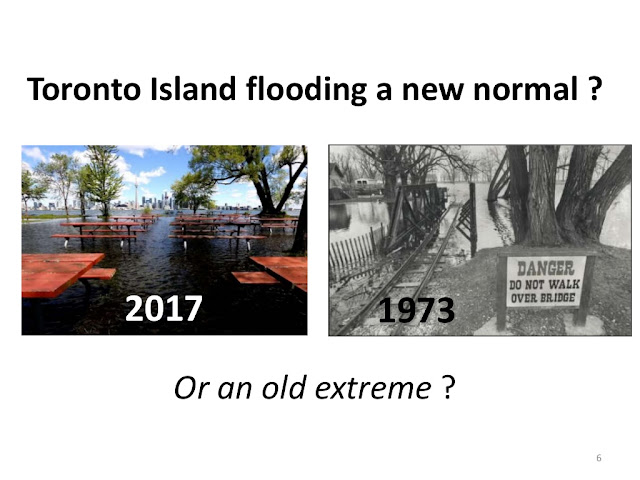 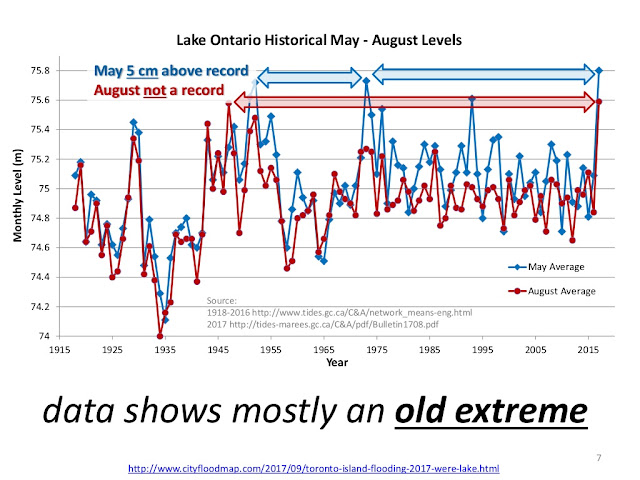 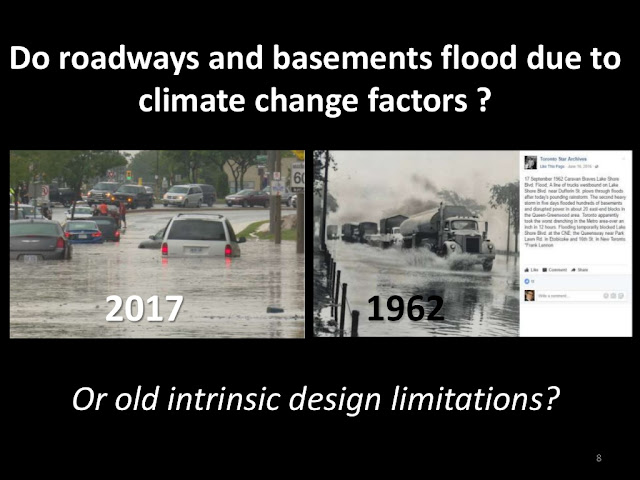 A review of the inquiry for Premier Davis on Toronto Don River flooding noted flooding since the 1800's as noted in this post: https://www.cityfloodmap.com/2015/07/go-train-flooding-not-new-1981-inquiry.html - an Environmental Assessment in 1983 noted this: 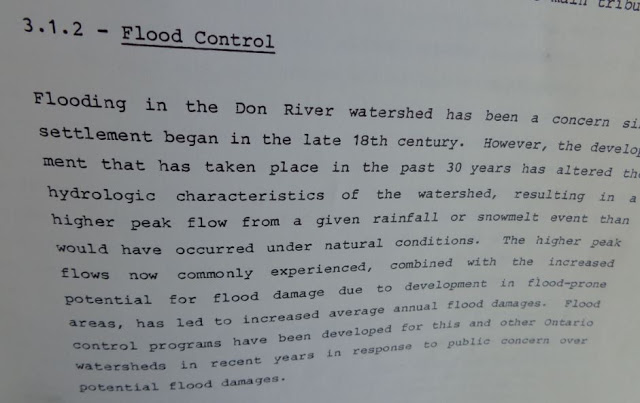 This Acres Consulting report noted the influence of hydrologic changes on peak flows and flood damages. We have described these changes as well such as in this JWMM paper: https://www.chijournal.org/C449 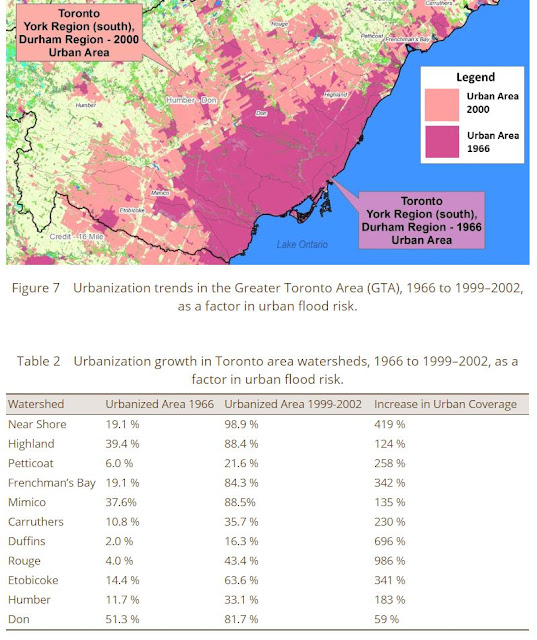 Here is a wider perspective: 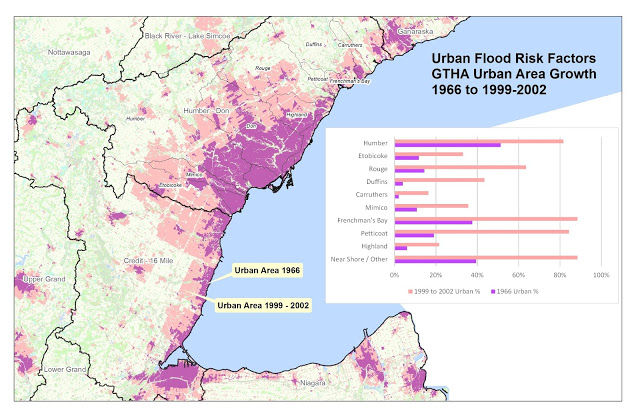 And here are urbanization trends in other southern Ontario municipalities: https://www.cityfloodmap.com/2016/08/land-use-change-drives-urban-flood-risk.html

We have assessed the trends in extreme rainfall which supported the CBC Ombudsman decision - here are the english-version findings: https://www.cityfloodmap.com/2019/06/office-of-ombudsman-french-services.html

Even Minister McKenna has reinforced comments made in Canada's Changing Climate Report stating in a June 2019 letter "the observational record has not yet shown evidence of consistent changes in short-duration precipitation extremes across the country":
https://www.cityfloodmap.com/2019/06/canadas-minister-of-environment-and.html

As the Climate Discussion Nexus video notes, the insurance industry has claimed that there is an increase in extreme rainfall caused by climate change - this has been reiterated by senior executives as in this op-ed in the Globe and Mail by Charles Brindamour and Dean Connor "Climate resilience must be part of every government’s agenda" (The Globe and Mail. September 25, 2018. https://www.theglobeandmail.com/business/commentary/article-climate-resilience-must-be-part-of-every-governments-agenda/), or as in this op-ed in the Financial Post by Craig Stewart "Counterpoint: Insurance claim costs are rising because severe weather is making flooding worse" (Financial Post. February 7, 2019. https://business.financialpost.com/opinion/counterpoint-insurance-claim-costs-are-rising-because-severe-weather-is-making-flooding-worse).

As noted in our Financial Post op-ed, the insurance industry has claimed a correlation and causation between extreme weather and flood damages. Unfortunately, there is no rain trend to correlate to making any causation discussion moot. As Dr. Dickinson explains in the video, warmer winters mean lower spring flood potential, and urbanization drives urban flood stresses, not changes in rainfall. More on this University of Guelph analysis is here:

Our rebuttal to the insurance industry's suggested correlation / causation was in the Financial Post: https://business.financialpost.com/opinion/hyped-up-misleading-insurance-myths-about-severe-weather-flooding-distract-us-from-real-problems

The Ombudsman has also recently noted in a new review that "It would have been wrong to state categorically that Canada has already seen an increase in extreme rainfall events" and that its reporting should be unambiguous about the past, present and future, with "distinctions made between observed phenomena and predicted phenomena" (https://www.cityfloodmap.com/2020/05/past-present-or-future-cbc-ombudsman.html).  The Ombudsman notes that CBC reporting describes future changes in extreme weather saying:

The last two bullet points are careful to use the future tense.