The previous post reviewed trends in observed annual maximum rainfall amounts at Canadian climate stations. These are provided in Environment and Climate Change Canada's Engineering Climate Datasets. Annual series are used to derive design intensities by first 'fitting a curve' to the data and creating a probability distribution to represent the frequency of observations. By selecting a design return period (i.e., the inverse of the probability of a rainfall intensity occurring in a given year), the corresponding design rainfall intensity can be calculated using the best-fit probability distribution of the observations. Design intensities across a range of durations (typically 5 minutes to 24 hours) create an intensity-duration-frequency curve (or IDF curve) for a given return period (typically 2, 5, 10, 25, 50 and 100-year).

Thirty years ago engineering consultants received 5 1/4 inch floppy disks with new IDF data whenever there were updates to Environment Canada data. A simple program (called "IDF87") was used to select stations of interest from a list and load the annual series data and IDF tables for printing. Today the data is online in "IDF Files" - link:  https://climate.weather.gc.ca/prods_servs/engineering_e.html

In southern Ontario observed data records have increased since 1990 at long-term stations. In today's Version 3.20 datasets, selected stations in southern Ontario have an average of 49 years of record with a total of 1026 station-years of observations. Since 1990, 494 station-years of data have been added, adding 23.5 years of data, on average, to the observed records.

These are average changes in design intensity at the above 21 stations since 1990: 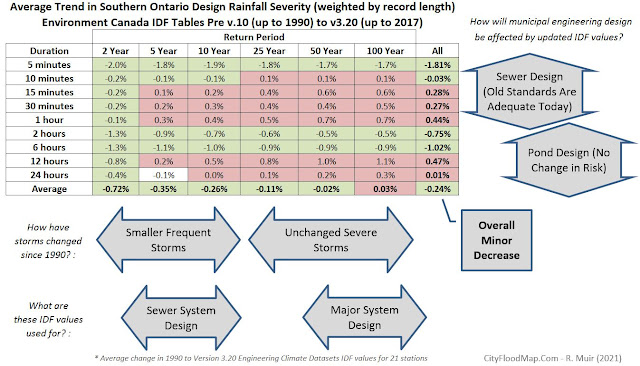 There is a balance of decreases and increases in all return periods and durations. Green cells show average decreases and red show average increase. As shown, overall all design intensities have decreased by an average of 0.24 % in southern Ontario since 1990. This is good news as infrastructure built over the past few decades, and that has 50+ years of service life remaining, is not "under-designed" for today's rainfall extremes - these design intensities are generally not greater than those used for decades.

The following chart shows these average trends at each return period and duration: 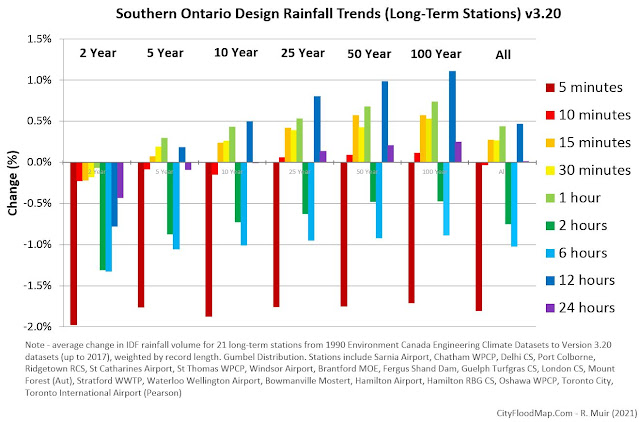 The range of trends are at each return period are shown below: 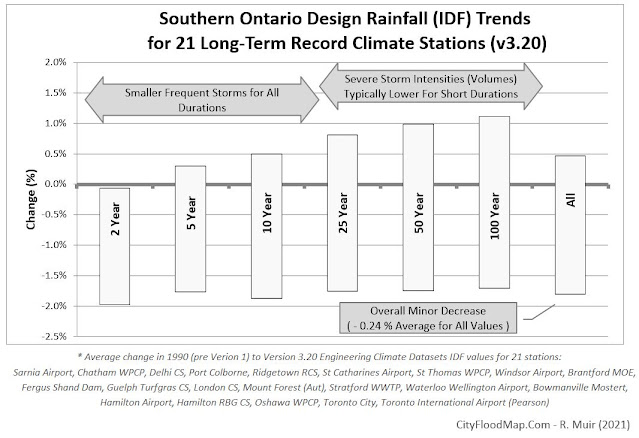 The intensities used to design minor systems, i.e., local sewer and drainage works, are predominantly lower (i.e., 2, 5 and 10-year intensities). Extreme rainfall intensities used to design major overland drainage systems and storage facilities have both increases and decreases.
Many municipalities have reviewed their design IDF values over recent years and have found no increase in local values that would warrant updating design values based on past observations. A previous post presented examples in southern Ontario - link:  https://www.cityfloodmap.com/2018/03/extreme-rainfall-and-climate-change-in.html
Despite past observations, it is good practice to account for future projected changes in rainfall design intensities, given the long service life of today's drainage infrastructure. In Ontario the 2014 provincial policy statement (2014 PPS) includes explicit reference to Climate Change: "Planning authorities shall consider the potential impacts of climate change that may increase the risk associated with natural hazards."

In May 2021 additional analysis has been included in these Engineering Climate Datasets. The "Whats_New_EC_IDF_v3-20.pdf" file includes a summary table that provides counts of stations and additional station years added with recent update:

Trends in annual maximum rainfall have not change all relative to the 2020 v-3.10 data. The majority of station data show no statistically significant trend. The table below compares trends in earlier datasets, averaged across all durations.

The v-3.20 datasets  have the following trends within various durations:

Excluding 'No Calculation" data, annual maximum observations with 'No Significant Trend' represents 92-94% of series, with an average of 93.0%. Excluding the 'No Calc' data results in an average of 4.5% significant increases and 2.5% significant decreases.
The following chart shows that majority of station data show no statistically significant trend. 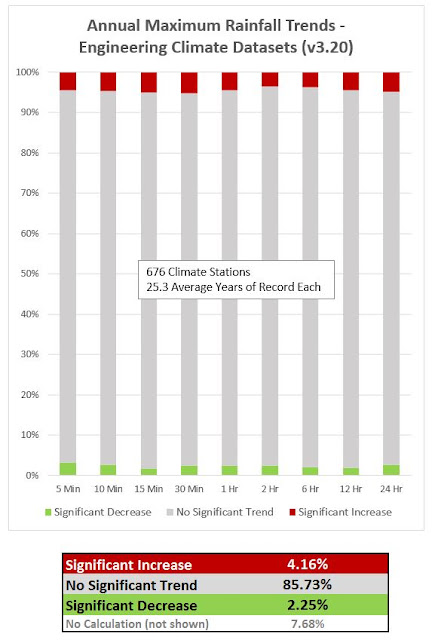 There has not been any appreciable change in the annual maximum rainfall trends considering earlier datasets (see v-2.30 to v-3.00 update https://www.cityfloodmap.com/2020/02/annual-maximum-rainfall-trends-in.html)

In Canada, the number of stations with annual series used to derive extreme rainfall statistics continues to increase. A previous post explored how manually-operated climate stations have been declining while this increase occurs (link: https://www.cityfloodmap.com/2020/06/do-we-have-enough-climate-stations-in.html). In 1990 there were only 11,268 station-years of data. Today with 17,133 station-years of data we have 52% more information to guide assessments of extreme rainfall.

This table summarizes the rise in climate station count and rise in station-years as new data is added. 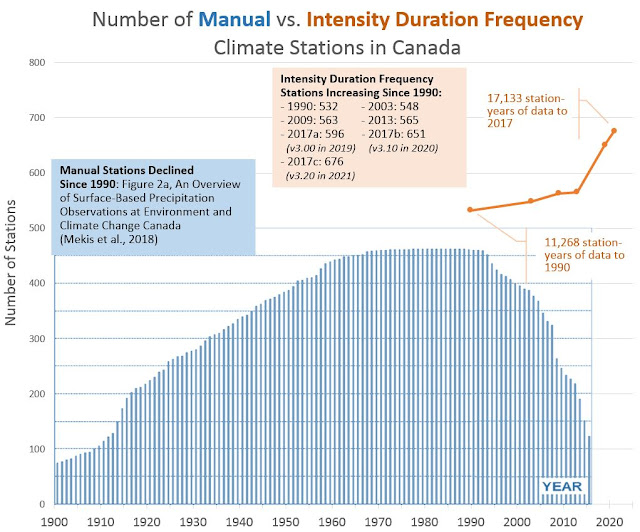