The most recent update of Canadian climate station data includes "IDF Files" in the Engineering Climate Datasets.  Probability distributions are fit to the observed annual maximum intensities to estimate design intensities at various 'return periods', i.e., event probabilities.  Low return periods characterize frequent events, such as 2-year storms that have a 1/2 or 50% annual exceedance probability.  Meanwhile high return period characterize rare events, such as 100-year storms that only have a 1/100 or 1% probability.

The most recent update to Environment and Climate Change Canada's IDF Files adds 8.7 years, on average, to climate station records that exist in both the earlier V2.00 and the newest V3.10 sets - here is a link to those IDF Files: https://climate.weather.gc.ca/prods_servs/engineering_e.html.  As the V2.00 data had a 29.1 year average record length, the longer V3.10 records with an average of 37.8 years of data are 23% longer.  This improves the reliability of the derived statistics, allowing higher return period event intensities to be estimated.  A rule of thumb is that return periods that are double the record length can be reliably estimated - so 38 years of data can be used to estimate 76 year return period intensities with good confidence.

The following chart illustrates the change in median design rainfall intensity from the earlier V2.00 to the most recently updated V3.10 datasets.

The following table shows the % change in intensities from V2.00 to V3.10.

The percentage changes are small when new data is added. When one compares the newest data added to the earlier V2.00 data a larger percentage change is apparent.  The following graphic illustrates this where the initial series, similar to the V2.00 data, is represented by the blue markers and the whole current series is represented by the orange markers.  While the average of the whole data series, represented by the orange dashed line, is only slightly above the initial series average (blue dashed line), the new data average is significantly higher (green dashed line).
When the percentage changes in the above table are factored to account for the the changes in the new data relative to the initial series, the percentages increase by 4.3 times more, as shown in the table below.
While individual stations will vary, the above table shows that on average the rare 50 to 100 year rainfall intensities in the almost 9 years of new data, added between the V2.00 and V3.10 datasets, are 2.4% to 2.2% lower than the earlier V2.00 values.  These changes are over 4 times greater than the shift in V2.00 to V3.10 values. In contrast the 2 year intensities are 2.6% higher in the new data relative to the V2.00 data.   Again this is over 4 times the V2.00 to V3.10 shift in the previous table.
As the confidence interval for rainfall statistics is wide relative to these changes, they may not represent statistically significant changes in rainfall intensity.  Some change may be significant however.  For example, the Toronto City confidence limits are shown below. 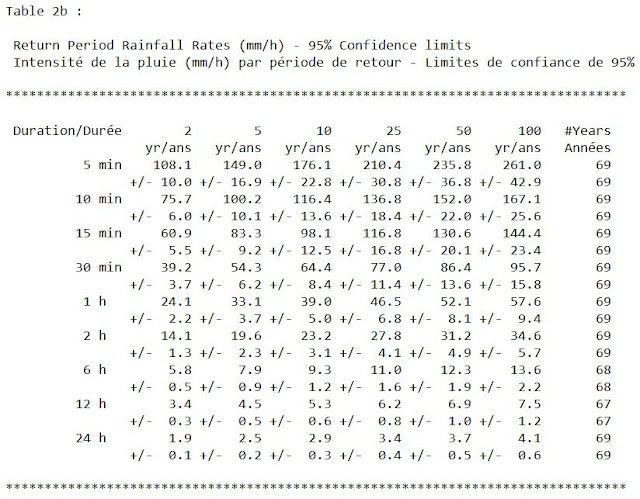 The 95% confidence interval for the 5 minute 100 year intensity of 42.9 mm/hr is plus or minus 16% of the expected value of 261 mm/hr.  A decrease of 6.8% in that statistic (the decrease in 5 minute 100 year intensities in new vs. V2.00 data) could be statistically significant.
To evaluate significance of trends, the Engineering Climate Datasets have included trends on annual maximum series observations since the V2.30 datasets.  These are explored for the entire V2.30, V3.00 and V3.10 datasets in this post: https://www.cityfloodmap.com/2020/05/annual-maximum-rainfall-trends-in.html 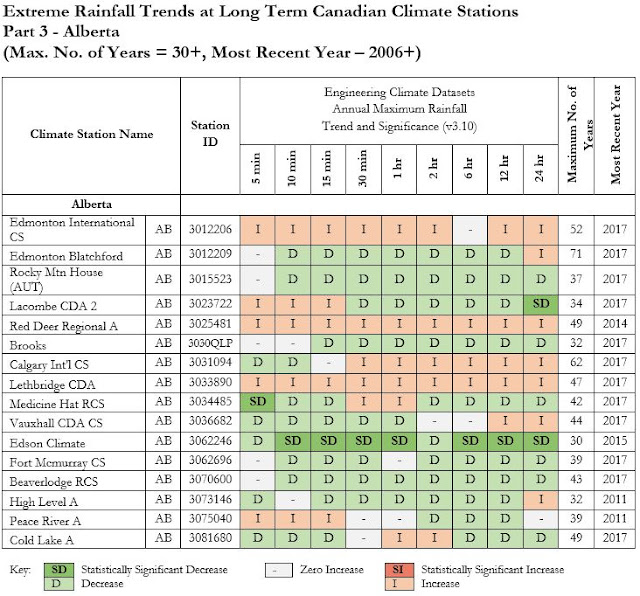 These annual maximum series (called AMS) trends are taken from summaries in Environment and Climate Change Canada's IDF Files, 'tucked away' text files called "idf_v-3.10_2020_03_27_trends.txt", and that look like this: 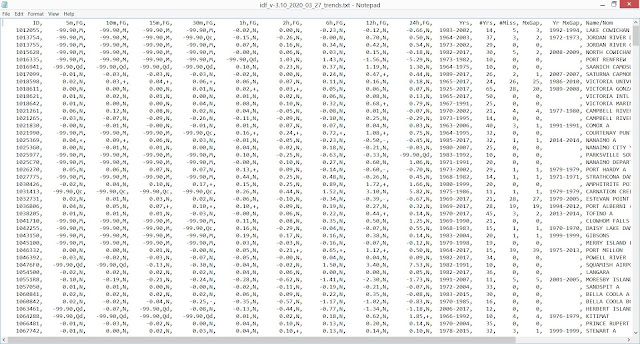 The AMS trends described in the text file above are also shown graphically on charts for each station and can be used to check if AMS trends may be significant.  We can look at an example to see if a large change in IDF values has an underlying significant change in AMS used to derive IDF values.
A summary of changes over time at the Toronto City climate station for 5 minute durations is shown below. The Toronto 5 minute 100 year design intensities have decreased from 268.5 mm/hr in the V2.00 period to 2007 to 261.0 mm/hr in the V3.10 (and V3.00) period up 2017.   That is a decrease of 2.8% since 2007. 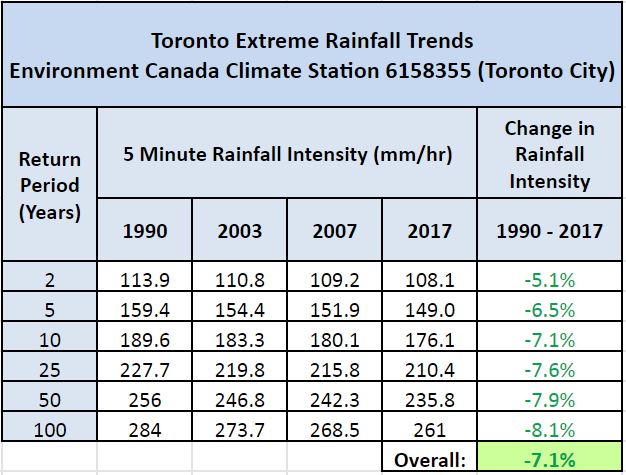 This appears to be a large change. But is the underlying AMS observed data change significant?  The AMS trend chart for Toronto City is shown below and shows that the 5 minute trend in the top right chart is decreasing but the trend is not significant.  Significant trends are illustrated with a blue trend line. 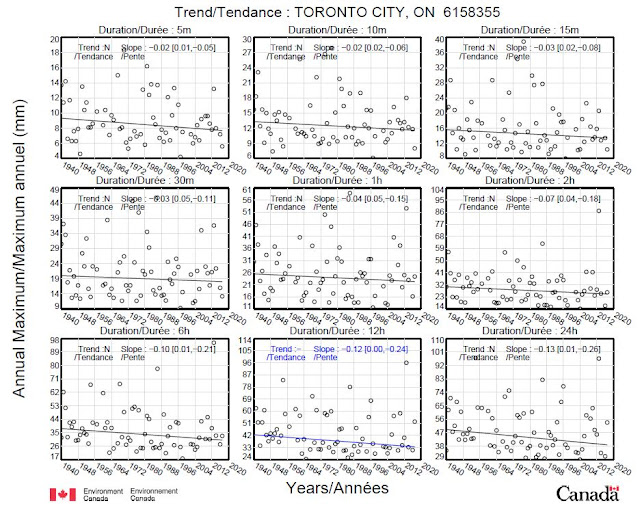 Surprise !
Despite the 2 year frequent storm intensity decreasing for 1990 to 2017, the IDF value from 2007 to 2017 does not change - it does not decrease in step with the AMS trend that is significantly decreasing.
Why?
This has to do with the effect of the extreme 2013 event on the Gumbel probability distribution used to derive IDF intensities from the AMS series.  The standard deviation of the 12 hour AMS was only 13.8 mm up to 2007 and this increased to 14.8 mm up to 2017.  This extends the tails of the distribution, resulting in the increased 100 year 12 hour design intensity from 7.2 to 7.5 mm/hr.
What about other durations and the decreasing 5 minute intensities in the earlier table? What is the effect of 2013 on other durations?
The extreme 2013 event increases the 100 year 24 hour design intensity, but the frequent 2 year 24 hour intensity has decreased since 1990, and has stayed steady since 2003, as shown below.

As for the short-duration design intensities that govern urban drainage / conveyance system design and performance, those are decreasing overall since 1990, despite some increases from 2007 to 2017 in the 1 hour data.

Most infrastructure in the Toronto area was built by 1990, considering that almost 90% of buildings were already in place by 1991.  Therefore most infrastructure was designed considering rainfall data that was available before 1990.  The performance of that infrastructure during short duration rainfall events would be affected by the design assumptions and the likely limited rainfall data available at the time.  It would also be affected by land use changes that have been significant over pervious decades as explored in previous posts like this https://www.cityfloodmap.com/2020/10/town-of-oakville-class-action-lawsuit.html or this https://www.cityfloodmap.com/2016/08/land-use-change-drives-urban-flood-risk.html.
In examining the Toronto IDF trends it is worth thinking about a common assumption that changes in mean values are reflected in changes in extremes.  The 12 hour and 24 hour data show that decreases in 2 year values can be accompanied by increases in 100 year values - a change in the opposite direction.  The data across Canada in the very first table above show a reversed trend - while 2 year intensities have increased overall and for all durations, the 20, 50 and 100 year intensities have all decreased overall and for all durations with one single exception (15 minute 100 year intensities increased).  A presentation on the Institute for Catastrophic Loss Reduction's report Telling the Weather Story for the Insurance Bureau of Canada (IBC) is on the IBC YouTube channel (https://www.youtube.com/watch?v=aRppaOquP5E), and makes the assumption that changes to averages also affect the extremes.  This graphic is used to explain how a shift in probability distribution (1 standard deviation in this illustration) is supposed to effect the extreme probabilities (see 13:10 into the presentation): 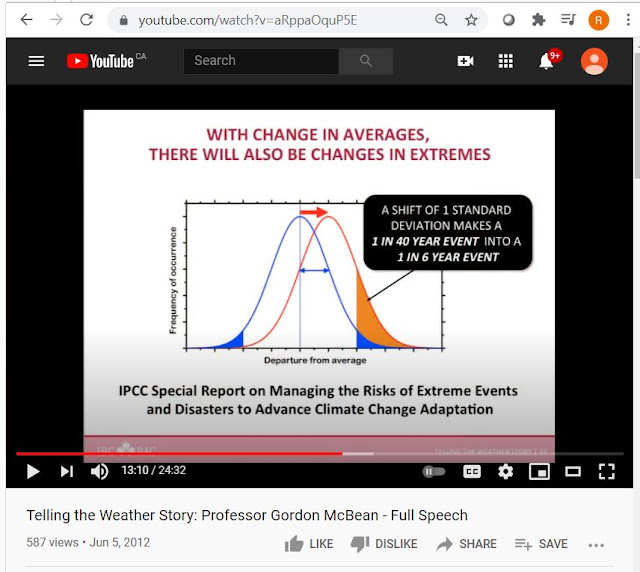 The speaker indicates "if we shift the means, we necessarily shift the frequency of occurrence of those extreme events".  That theory, or "necessity", is not showing up in the IDF shifts in Canadian data however.  In fact the shift in means, represented by the 2 year rainfall intensities, are going up overall, but this is accompanied by a decrease in the extremes (20, 50 and 100 year rainfall intensities) overall.  The shifts in means and extreme are not in the same direction.  And we see examples of the opposite occurring too - Toronto 2 year intensities decreasing with 100 year intensities increasing for some durations.
Its always good to check theories with data.
Warming in Canada is assumed to bring more intense rainfall in theory, but data has not shown an increase as illustrated above with the Engineering Climate Datasets.  Shifts in means or averages "necessarily" shift extremes too, again in theory, but not in Canadian rainfall observations, again as shown above.  Shifts in daily rainfall, often simulated in climate models, are assumed to predict changes in short duration extremes affecting urban flooding as well - but Canadian data shows that in regions across the country the shifts in daily rainfall can be opposite to the shifts in short duration rainfall (see this post that drills down into IDF shifts in several regions of the country and there 24 hour intensities and short duration ones are going in opposite directions: https://www.cityfloodmap.com/2020/07/can-we-use-daily-rainfall-models-to.html).
Theories need to be tested with experiments, i.e., real observational data, of course.  Richard Feynman perhaps said it best: "It doesn't matter how beautiful your theory is, it doesn't matter how smart you are. If it doesn't agree with experiment, it's wrong."
Posted by Flood Advisor