Roger Pielke, Jr.'s 2014 book  The Rightful Place of Science: Disasters & Climate Change is a must-read for anyone interested in understanding and mitigating flood damages in Ontario cities. It reinforces several local themes presented in this blog as well, e.g., extreme rainfall is not increasing (due to climate change or anything else), flood damages are influenced by other factors and are not increasing as a result of more frequent of extreme rainfall. (see 2017 update at bottom of post, and 1970-2019 hurricane trend).

Pielke has been recently highlighted in the Wall Street Journal where he shares his "Unhappy Life as a Climate Heretic".

Pielke demonstrates that the frequency and severity or strength of hurricanes (tropical cyclones) has not increased over the past century. This is good news for Ontario where many river flood hazards are defined by Hurricane Hazel as the regional storm regulatory event in many Conservation Authority jurisdictions. 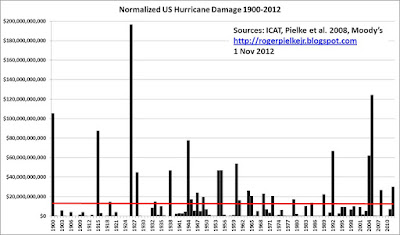 He also delves into damages resulting from these events, normalized to reflect the increase in the number of people and the amount of property in vulnerable areas. While losses have increased it is due to the increase in assets at risk - the normalized damages are in fact 'flat'.

In Ontario, the percentage of properties lie in river flood plains where hazards are governed by hurricane events is in the very low single digits. Nonetheless, decreasing hurricane frequency is a good thing. 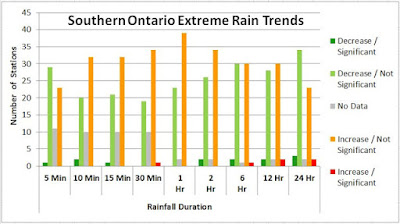 Citing IPCC, Pielke notes that there have been statistically significant decreases and increases in 'heavy precipitation' events, and that there are strong regional and subregional variations in the trends. It is important to note the definition of heavy precipitation is rainfall above the 95% percentile of daily rainfall .. so not really short-duration, high-volume, extreme rainfall that causes widespread urban flooding in Ontario.

As reported on this blog, Ontario has regional trends in annual maximum observed rainfall volumes. Charts at right present Environment and Climate Change Canada's Engineering Climate Datasets Version 2.3 trend data. For short durations, less than 6 hour duration, there are four times more statistically significant decreases in maximum rainfall than increases. So southern Ontario regional trends show decreasing rainfall severity. You could "tease out" a teeny, tiny Ontario-wide increase if you average the whole province together, but that would underestimate the increases up north and misstate the decreases down south. 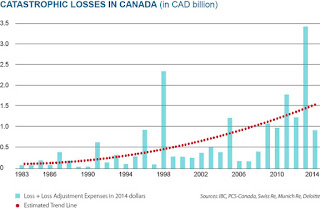 Intact has reported on damage trends in their 'insurance is evolving' webpage. They indicate that "Payouts from extreme weather have more than doubled every five to 10 years since the 1980s." and provide the chart at the right. 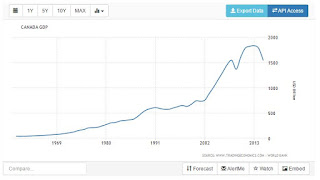 So while losses are increasing, how is GDP increasing in Canada? That is, are normalized losses increasing in Canada? Or are those trends like those identified by Peilke? The website tradingeconomics.com provides this Canadian GDP growth chart to the right. Since the early 1980's, GDP has increased about 500% (approximately $300B USD to over $1500B USD). That could explain a portion of the absolute increase in losses since the early 1980's identified by Intact.

* NEW * using Statistics Canada data for expenditure-based Gross Domestic Product and catastrophic loss data presented by Intact Centre for Climate Adaptation have been used to assess normalized losses as a fraction of GDP. While losses have increased significantly, but the normalized Canadian catastrophic losses are up and down. There is a low r-squared upward trend in normalized losses (i.e., not a strong trend). So using Pielke's 'detection vs. attribution' distinction, one could argue there is a detectable trend upward, however the attribution - what caused it - is unclear. As noted below, we have significant quantifiable upward trends in urbanization in Ontario cities over past decades, suggesting increased runoff stresses under a stationary climate, or extreme weather trends. 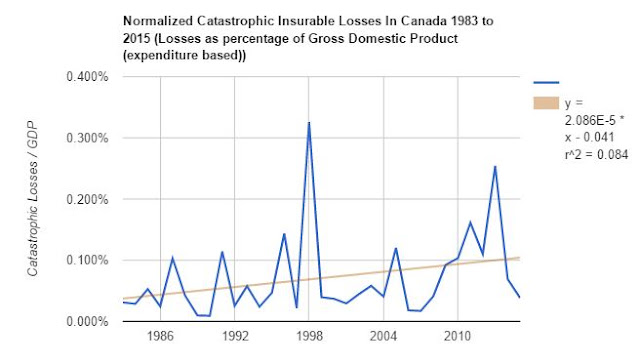 Pielke cites a 2014 IPCC report that notes the following:

"Economic growth, including greater concentrations of people and wealth in periled areas and rising insurance penetration, is the most important driver of increasing losses."

Ironic - some more losses are because of rising insurance penetration. Makes sense though. Here are Canadian cat losses normalized based on personal property net written premiums (according to Facts of the Property and Casualty Insurance Industry in Canada 2015 is published by Insurance Bureau of
Canada (IBC), 2015): 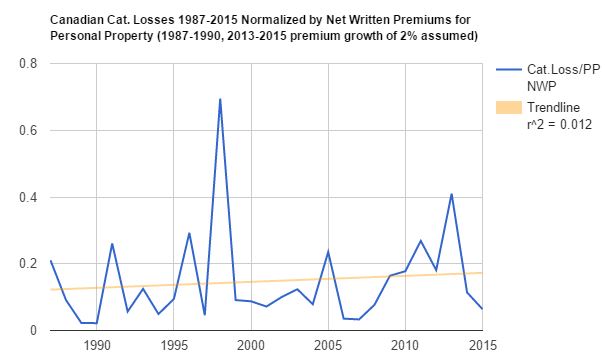 Wow! Not much of a trend there to suggest that extreme weather is getting a lot worse - normalized losses are up and down with the maximum relative losses back in 1997 (note the 2014 and 2015 premiums are assumed to be 2% greater than previous years to extend this from 2013 to 2015 where cat loss information was available; similarly 1987-1989 premiums are assumed to increase at 2% to arrive at the reported 1990 value). The r-squared is very low too (0.012) meaning not a strong trend here over time. This muted trend is in stark contrast to the non-normalized losses typically reported by the insurance industry.

Intersection of Vulnerability and Extreme Events

A refreshing observation in Pielke's book is that it is the intersection of intrinsic vulnerabilities and exposure to extreme weather events that causes damages, like flood losses. More properties and belongings in the wrong place explain increased losses. So I made a fancy graphic to explain it: 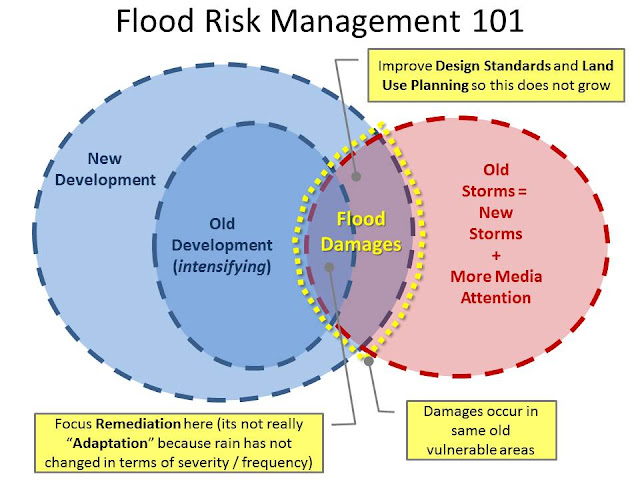 I just found this infrastructure climate vulnerability Venn diagram in the PIEVC Engineering Protocol
For Infrastructure Vulnerability Assessment and Adaptation to a Changing Climate PRINCIPLES and GUIDELINES, so I guess we can't copyright it. 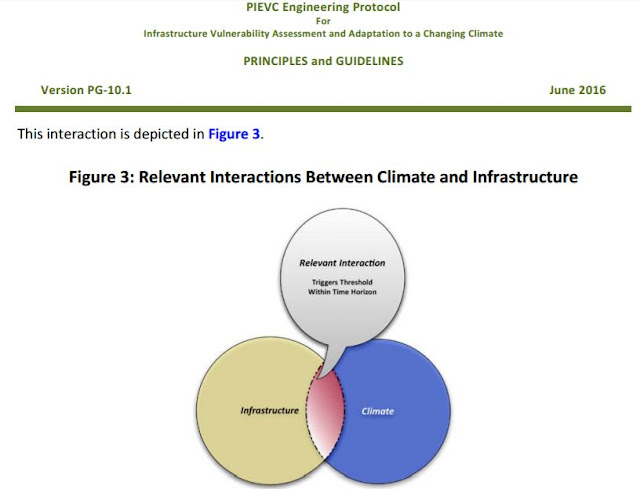 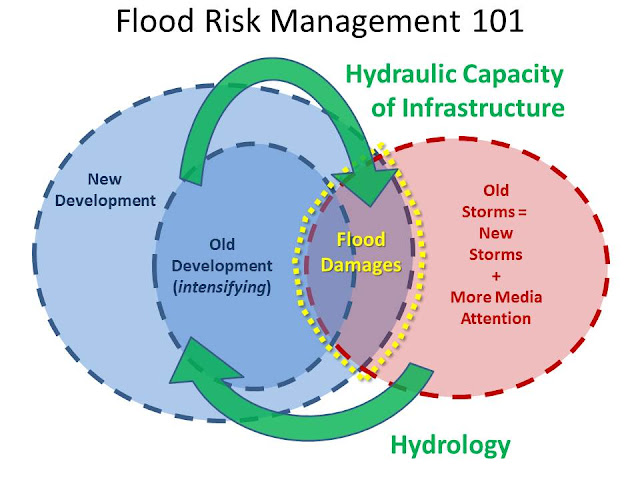 The Media and Public Opinion

Pielke notes that the reporting on extreme weather has increased considerably, which feeds a public perception that extreme events are increasing in frequency or severity. For example in the New York Times the phrase 'extreme weather' has jumped in popularity in newspaper articles since the mid 1990's.  In this blog we have commented on the 'availability bias' that such frequent reporting can cause, skewing the public's perception on the true probability of events. A common statistical sin in such reports is to declare a record rainfall ... umm ... for a particular calendar day (July 8, 2013 in Mississauga, Ontario, or September 28, 2016 in Windsor/Tecumseh, Ontario). Once engineers start design infrastructure to operate differently on different calendar days of the year, such reporting of calendar day rainfall records will be worthwhile, saintly even. But sorry, that's nuts and not going to happen any time soon.

Key Take Away - Let's Get Back On Track, Put First Things First, and not be so ideologically driven to predetermined conclusions that we miss the obvious stuff.

I love this quote in the Pielke's book :

"There is such a furor of concern about the linkage between greenhouse forcing and floods that it causes society to lose focus on the things we already know on floods and how to mitigate and adapt to them."

That reference abstract also notes "Economic losses from floods have greatly increased, principally driven by the expanding exposure of assets at risk. It has not been possible to attribute rain-generated peak streamflow trends to anthropogenic climate change over the past several decades. Projected increases in the frequency and intensity of heavy rainfall, based on climate models, should contribute to increases in precipitation-generated local flooding (e.g. flash flooding and urban flooding)."

Along those lines, in this blog we have tried to expose some of those existing urban flood risks related to:

Maybe I didn't learn anything from Pielke's book, like the importance of data and statistical analysis to advance science and public policy. I did learn that the New York Times has a great online tool to analyze the frequency of extreme weather references in their publication. I have used that to help establish some undeniable correlations between extreme weather, twerking and Yoda, as shown in the graphic below.

Before considering Hurricane Harvey, a category 4 hurricane, we can review 2017 trends from Pielke Jr. - there had been a large gap before Hurricane Harvey, globally hurricanes are less frequent, and in the US the losses have been decreasing as a proportion of GDP: 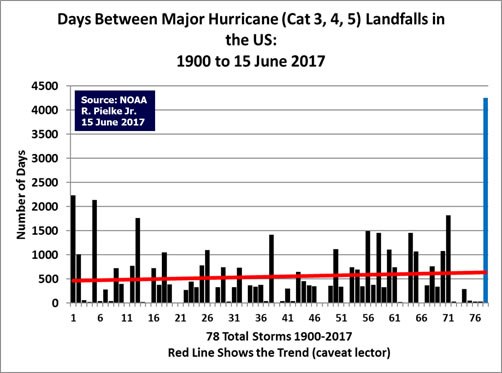 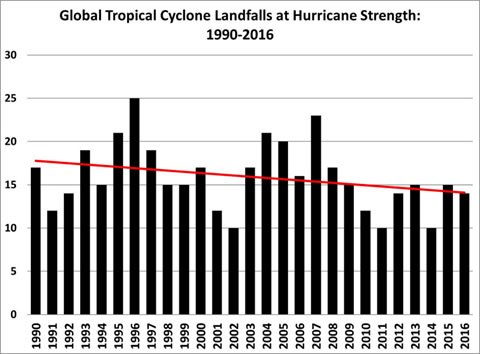 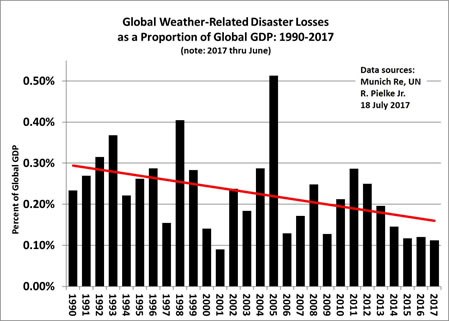 Dr. Pielke Jr. and atmospheric scientist Ryan Maue have recent reviewed hurricane (tropical cyclone) trends over the past 50 years - see article in Forbes. While the variability in hurricanes making land fall is quite large, making it hard to distinguish a clear trend the counts of events using the Saffir-Simpson (S/S) hurricane scale use by the U.S. National Oceanic and Atmospheric Administration is shown below: 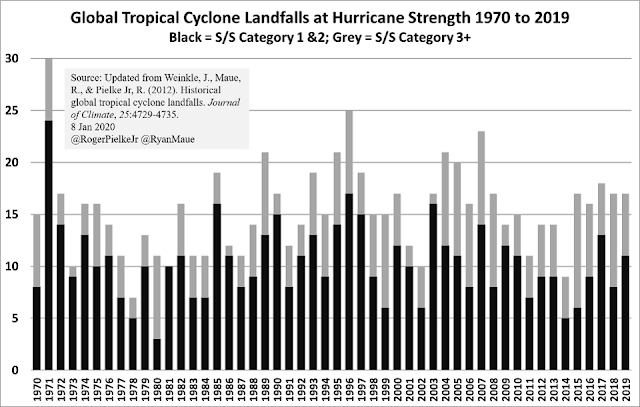 A recent summary notes the consensus on a lack of anthropogenic influence trends, but predicted future increases (Pielke, 2019 - Forbes):

"NOAA [the National Oceanic and Atmospheric Administration] concludes ‘an anthropogenic
influence has not been formally detected for hurricane precipitation,’ but finds it likely that
increases will occur this century. Similarly, the WMO concluded, ‘no observational studies have
provided convincing evidence of a detectable anthropogenic influence specifically on hurricane-related precipitation,’ but also that an increase should be expected this century. The U.S. National
Climate Assessment concurred, explaining that there is agreement on predictions for a future
increase in hurricane-related rainfall, but ‘a limiting factor for confidence in the results is the lack
of a supporting detectable anthropogenic contribution in observed tropical cyclone data."

Despite this, damages are increasing. Klotzback et al. (2018) noted:

“While neither U.S. landfalling hurricane frequency nor intensity shows a significant trend since
1900, growth in coastal population and wealth have led to increasing hurricane-related damage
along the U.S. coastline.”

The following chart shows losses normalized, considering changes in inflation and wealth at the
national level as well as changes in population and housing units at the coastal county level in the
US: 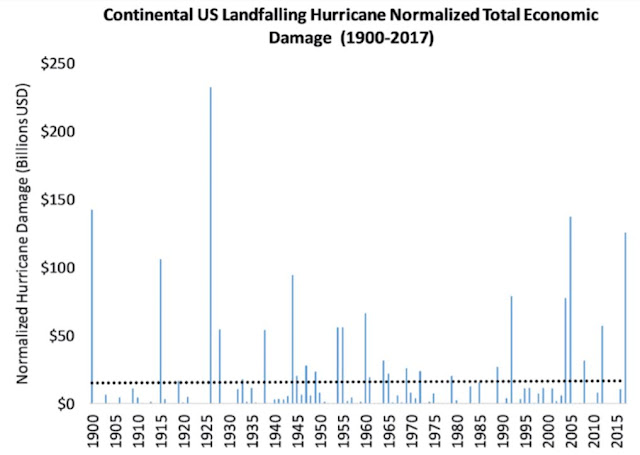