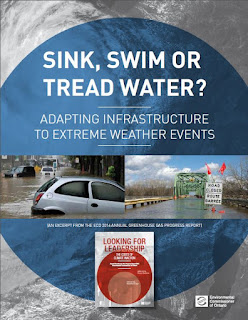 The Environmental Commissioner of Ontario published the ECO 2014 Annual Greenhouse Gas Progress Report.  An excerpt called "Sink, Swim, or Tread Water? Adapting Infrastructure to Extreme Events" explores extreme storms, and municipal and provincial responses, and opportunities. This post help explore some of those opportunities and offers direction on some inaccurate statements along the way.

The document suggest a new normal in extreme rainfall:

"Ontario has always experienced storms; however, the province has recently faced more intense and frequent extreme weather, as well as unprecedented damage costs."

The facts are that the province has not faced more intense and frequent extreme weather, as shown in Environment Canada's Engineering Climate Datasets.  It is true damage costs have increased but that is due to other factors.

Ontario short term rainfall intensities are trending up and down and statistically not moving in any significant direction. Rainfall trends as can be found in the report at the following link:

Regardless of this oversight on extreme rainfall trends, many of the topics of the ECO document are worth discussing because of the fact that damage costs are increasing is undeniable. 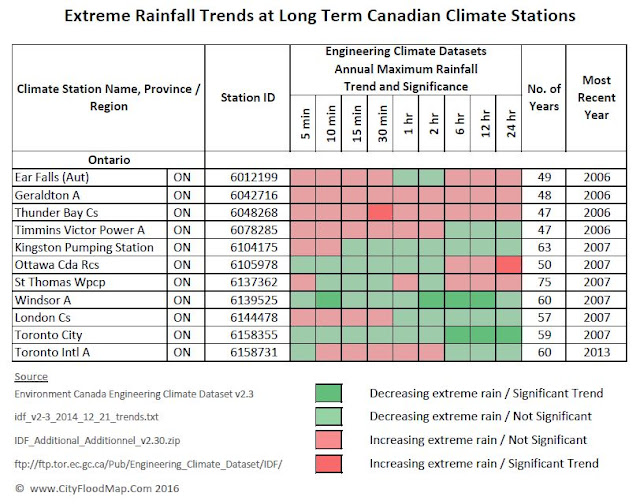 The table below shows more statistically significant decreasing in rainfall intensity than increases in intensity in Southern Ontario.

The insurance industry has fabricated rainfall intensity trends in their Telling the Weather Story publication, confusing theoretical predictions with real, factual, historical data and analysis, which may be confusing the Environmental Commissioner of Ontario:

The ECO document rightly notes that the 2013 storm resulted in "serious environmental damage" as the storm:

"overwhelmed wastewater treatment plants and stormwater systems; up to a billion litres
of sewage, as well as garbage and debris, were washed into Toronto’s rivers and Lake Ontario"

What is peculiar in this statement is that sewer infrastructure in the province under F-5-5 overflows less than it did before many pollution control plans were put into place, resulting in more insurance losses. This is documented in my neighbourhood's Municipal Class EA study where infrastructure to keep eastern beaches swimmable contributed to sewer back-up, and it applies to any sewage overflow regulator adjusted to keep more "poop in the pipe" (Hamilton's Sterling CSO regulator, etc.).

What is disappointing in the "serious environmental damage" statement is the narrow definition of "Environment" - it notes the spill's impacts to the aquatic food web but does not recognize the broader environment as defined in the Environmental Assessment Act, including the social environment and back-up effects on homeowners, and economic environment and insurance costs (damage claims and then higher premiums).

Further discussions on "environmental damages" should recognize that there are trade-offs between broader aspects of the environment. The role of F-5-5 and impacts to flood risks should be reviewed by MOECC as an opportunity to explore means to improve the boarder environment in the province.

It is noted that the insurance industry predicts premium rates will go up. They have.

What is not discussed is that the insurance industry is not set-up to efficiently assess urban flood risk. Because property and casualty insurers compete for business, and because the industry is fragmented with 20 companies sharing between

The ECO document suggests that municipalities are lacking guidance on future climate predictions and best management practices.  This is not the case. Design standards for GTA and Golden Horseshoe communities at the time of construction before 1980 are simply limited by today's standards. Storm sewers were designed for 2 to 5 year storms and no overland flow relief was provided as part of master drainage planning or subdivision grading. The drainage system capacity of many old systems must generally be doubled to meet a high standard of 100 year flow conveyance - the best management practices are pipe conveyance and storage for storm sewer networks. For sanitary sewer networks, the solution is extraneous inflow reduction, e.g, through mandatory downspout disconnection and capacity upgrades to handle extraneous infiltration from foundation drains connected to the sanitary system up to the mid 1970's. Future climate predictions are not a key unknown as sometimes design standard upgrades alone may be a 400% increase in built capacity.

The ECO document points to aging infrastructure built in the 1950's to 1970 and barriers to implementing Best Management Practices (green infrastructure) as the reason.  This is misguided as increased urbanization, lost overland flow paths, and lost sewage overflow relief capacity in the sewer system are the causes of increased damages and premiums. Futhermore, macro economic factors have reduced property and casualty insurer investment returns (previous double digit and now low single digit), causing them to no longer subsidize underwriting losses as they had done for decades, thus increasing premiums to cover actual costs.

The ECO should know that when it comes to storm infrastructure, 100+ year service life is not uncommon. Also no Municipal Class Environmental Assessment studies have identified aging infrastructure as a cause of flooding. What is missing in the ECO document discussion is that increasing levels of services alone account for the majority of infrastructure upgrade costs to manage flood risks.