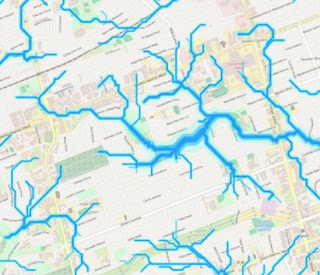 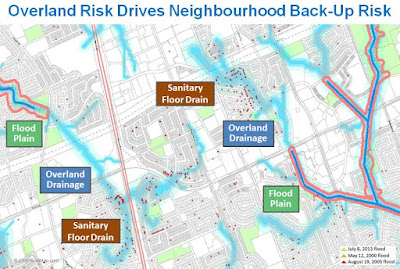 Overland flood risk mapping is the natural extension of river risk mapping, up beyond the valley flood plain limits, and across 'table land' as they say in the development industry. Typically in Ontario, regulated valley areas incorporate a range of natural heritage features and hazards including flood plain, watercourse meander belt width, and unstable valley wall slopes. On table land, overland flood risk hazards run across roadways and the developed lot fabric of our cities, sometimes confined in drainage features, or sometimes not. Overland flow zones typically do not coincide with natural heritage features. like vegetated valley flood plains do.

Sometimes nobody. After all, without natural heritage features, there is less to protect under Ontario's provincial policy statement. And because the overland risks emerge on such an infrequent basis (during the most extreme rainfall events), they are not top of mind, nor are they easy to define. Progressive cities like the City of Toronto has an aggressive basement flood reduction program that assesses overland drainage systems and identifies risk management alternatives. But these overland systems are typically developed only in specific remediation areas, incorporated into InfoWorks models and characterized in Class Environment Assessment reports.

Well, in some isolated cases overland flood risks are mapped and managed in the same manner as regulated valley flood plains by Ontario conservation authorities. Typically these are areas of isolated watercourse enclosure where extreme rainfall runoff overwhelms the sewer or culvert conveyance system and flows over land. Almost exclusively, however, flood plain risk maps stop at the conveyance system outlet (i.e., headwall / outfall) and do not extend further up onto table land.

What About Insurance Industry Mapping?

Overland surface flooding flood risks, sometimes called pluvial flood areas, are mapped by companies such as JBA and used by insurance companies as input to insurance business decisions (where to insure, setting appropriate risk-based premiums) - but mapping is proprietary, and results are not used for regulation or risk management purposes. Rather, surface flood risk mapping is a business service. 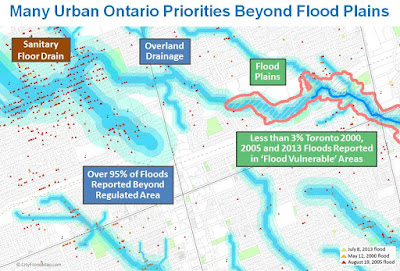 In overland flood risk zone, not flood plains - in fact in Toronto 98% of flooding in the last three large storms was beyond river flood vulnerable areas. This is consistent with Conservation Ontario figures that identified the percentage of Ontario properties in flood plains to be in the low, low single digits. 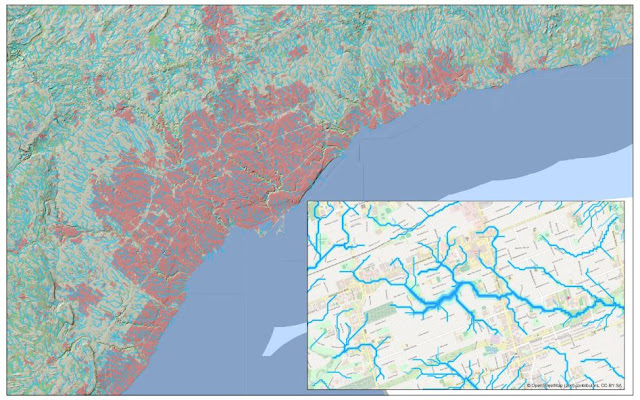 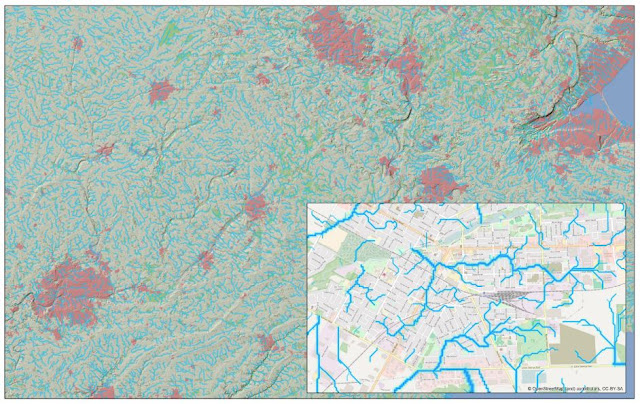 Currently overland risk zones are refined for south and south western Ontario (excluding the Ottawa River basin). This represents over 800,000 overland flow segments in the major drainage network. We are evaluating distribution methods in order to share these results as well as input layers that can be used to support refinements by others. Stay tuned!
Posted by Flood Advisor