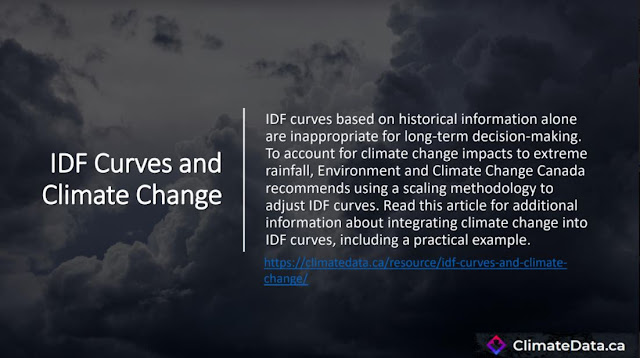 Past changes in IDF values have been reviewed in a previous post: https://www.cityfloodmap.com/2020/07/how-have-rainfall-intensities-changed.html
Note that the ECCC guidance relies on RCP4.5 and RCP8.5 scenarios based on historical and future annual average temperatures for IDF stations from the Climate Atlas. Recent research by Roger Pielke Jr, Matthew G. Burgess and Justin Ritchie suggests those RCPs are not the most plausible scenarios (see: "Plausible 2005-2050 emissions scenarios project between 2 and 3 degrees C of warming by 2100" in Environmental Research Letters - https://iopscience.iop.org/article/10.1088/1748-9326/ac4ebf). Accordingly practitioners involved in robust risk assessments should consider how scenarios that are less plausible are considered in analysis.
****
Learning Zone
Topic 6: Intensity-Duration-Frequency (IDF) Curves
IDF Curves and Climate Change
It is not appropriate to use IDF curves based on historical information alone for long-term planning. To account for climate change impacts to extreme rainfall, ECCC recommends use of a scaling methodology to adjust IDF curves. Read this article for additional information about integrating climate change into IDF curves, including a practical example.
TIME TO COMPLETION
5 min
Summary
IDF curves are an important tool for decision-making about risks of extreme precipitation, but climate change is expected to increase extreme rainfall in Canada. Because of this, IDF curves based on historical observations alone are not appropriate for long-term decision-making. To account for climate change impacts to extreme rainfall and IDF curves, Environment and Climate Change Canada recommends use of a scaling methodology.
Climate change has intensified extreme rainfall events in North America and is projected to do so even further in future. However, projecting future rainfall metrics shown on IDF figures remains challenging due to sparse extreme rainfall observations, challenges in modelling local extreme rain events, and climate variability.
Due to the challenges described in the Primer on Climate Change and Extreme Precipitation, both climate models and statistical tools have limitations in their ability to project future short duration rainfall events. This is described in more detail in CSA PLUS 4013:2019: Technical Guide: Development, Interpretation And Use Of Rainfall Intensity-Duration-Frequency (IDF) Information along with corresponding guidance for practitioners.
However, a relationship between warming temperatures and precipitation extremes provides an alternate means for adjusting historical IDF curves. This ‘temperature scaling’ method is being increasingly used to estimate future Canadian rainfall extremes.  It is described in CSA PLUS 4013 and is being used to develop future rainfall estimates for the National Building Code of Canada and Canadian Highway Bridge Design Code.
Temperature scaling provides a simple and robust way to update IDF curves for climate change.  However, careful consideration of uncertainties in estimates of future extreme rainfall is still required.  Scaling factors may vary between locations and rainfall event types.  Local temperature change projections depend on future emissions, climate model choices, and natural variability.   And the historical IDF curves that underlie any future IDF curves estimates may themselves be less than ideal estimates of past rainfall extremes.
ECCC suggests the following method for estimating future changes to extreme rainfall magnitudes described on IDF curves:
1. For the location of interest, download historical IDF curve data from ClimateData.ca or develop based on guidance from ECCC and CSA PLUS 4013:2019.  Use this data to determine historical estimated rainfall intensity (RC) for the storm duration and return period of interest. 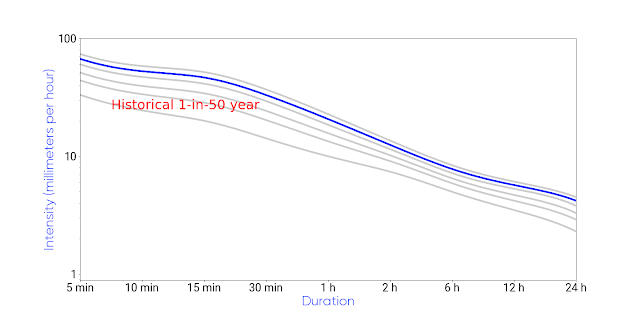 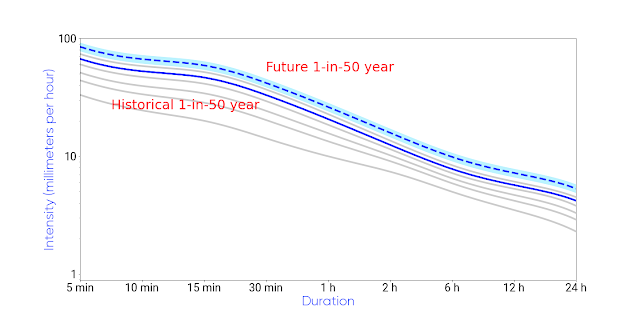 Integrating Climate Change into IDFs: A Worked Example
This exercise provides an illustrative step-by-step example of how to apply the temperature scaling approach to shift IDF values and estimate future extreme rainfall conditions.
Example goal: Estimate change in intensity of 1-in-100-year rainfall, for a 1-hour storm duration, for design of new a Canadian infrastructure project that is expected to last 50 years.
Step 1: Obtain a historical estimate of 1-in-100-year rainfall for 1-hour storms:
Download available ECCC IDF historical baseline information from ClimateData.ca -> Navigate to the ClimateData.ca IDF map, and identify the closest available data to your location, with a long record of rainfall observations.
Identify historical 1-in-100-year 1-hour storm intensity for your location.
Step 2: Estimate change in temperature for your location, for 50 years in the future:
Download historical and future annual average temperatures for the IDF station location from the Climate Atlas (or another suitable resource) for an ensemble of climate models and for RCP4.5 and RCP8.5.  If using the Climate Atlas: obtain a location-relevant climate summary report, and for Variable=‘Mean Temperature’ and Type of display=‘Time Series’, from the ‘Climate model data’ link obtain two CSV format spreadsheets, each containing multi-model RCP 4.5 and RCP 8.5 projection information.
Temperature Change = Future Temperature – Historical Temperature
Step 3: Estimate change in extreme rainfall for your location, for 50 years in the future:
Now that you have read IDF Curves and Climate Change, you may wish to review IDF Curves 101 and Best Practices on Using IDF Curves.
Posted by Flood Advisor