Can the history of the Fire Underwriter Survey provide a roadmap to a future Canadian flood underwriting model? 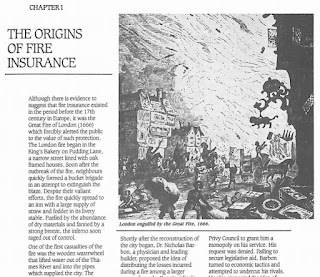 The history of the FUA and the organizational and technical benefits offered to its members is described in this book:

If "flood is the new fire" as far as Canadian insurance losses go (Fort McMurray 2016 notwithstanding), much can be learned in how the insurance industry developed the Fire Underwriters organization to organize, guide, educate, and support member insurance companies.

How did fire insurance evolve?

The first fire policy was written by the Phoenix Company in 1782 policy in Sr. John's, Newfoundland and the first Canadian company to offer fire insurance was the Nova Scotia Fire Insurance Association, founded in 1809 in Halifax. More players joined and by the mid 1800's it was apparent there was a need for standardization and organization - so in 1857 "in order to better serve the interests of the community and the participating companies, a joint body or association called the Halifax Insurance Board (was) formed".

Following a 1859 severe fire in downtown Halifax with payouts of £128,075 the board commented on causes and identified "the want of sufficient supply of water at the commencement and to a general want of management". It made recommendations for an improved city water supply for the city, more firemen, and water supply infrastructure along Barrack Street with branch lines exclusively for fires. Without these risk reduction measures, the board would increase tariffs (i.e., premiums).

The early Halifax example illustrates the partnership between government and insurance industry whereby standards for municipal services consider insurance industry needs, which it could be argued, mirror the financial needs of the economy, and the government's need to promote safety and security in the community as a whole.

Over the next century or so, a national organization was formed, evolved and grew (Canadian Underwriter's Association (CUA) founded in the late 1880's, and Insurer's Advisory Organization (IAO) in the 1970's incorporating CUA and independent members). In the late 1970s, lAO developed one of its first computer applications to determine whether a sprinkler system would function properly and if the water supply was sufficient. This replaced inefficient manual calculations.

One could draw parallels between the IAO's analysis of sprinkler fire suppression systems and the assessed benefits of flood prevention systems. In the case of large watersheds in the Toronto area, prevention features would include infrastructure such as the Lower Donlands Landform Berm, Black Creek Channel, and TRCA dams - all incorporated in JBA's flood defense layers. At the local municipal level, flood prevention features would include drainage and municipal infrastructure standards incorporated in new resilient communities, or upgrades for flood risk mitigation in communities build with lower standards (e.g., pre-1980's subdivisions with limited overland drainage design, and partially-separated wastewater systems).

The parallel in the context of urban flood risk assessment would be i) assessment of wastewater systems to safety convey extraneous flows during extreme wet weather events, without surcharging and causing floor drain sewer back-up, and ii) assessment of overland drainage systems to safely convey overland runoff ('major drainage system flows) to an adequate outlet like a channel or valley, without surrounding and entering buildings. Since the 1970's, computer assessments of wastewater system capacity has been pursued using the SWMM model, typically in the context of flood remediation or CSO reduction studies. Today, such models are more widely available, but even in jurisdictions like Toronto, they are only now being developed to cover the entire municipality and to be developed with robust standards. Over time, the risk characterization from such models could be used to establish a municipal grading for insurance purposes, likely at a block face level of detail. Overland flood risk models are only now becoming commonplace, including JBA's riverine and surface (pluvial) flood risk models based on 2D overland flow modelling.

The difference between CGI's fire risk assessments and flood risk assessments is that no flood risk assessments are tied to 'municipal gradings'. Municipal wastewater system assessments can result in infrastructure improvements, or when not cost effective, deferred projects. But neither condition is communicated to an insurance risk body, and the insurance industry is not known to participate as a stakeholder in the municipal environmental assessment studies that guide the improvement strategies. Similarly, the overland risk assessment available to those writing individual policies are not shared with municipalities to guide macro-scale, neighbourhood-level improvements to infrastructure that could mitigate risks and premiums. IBC's Municipal Risk Assessment Tool (MRAT) estimates municipal wastewater back-up risks but these are not used to set premium rates or identify specific municipal infrastructure improvements (i.e., MRAT provides generalized, regression-based "high-low" risk mapping for one type of flood risk but does not incorporate system hydraulics to assess upgrades, nor does it assess neighbourhood overland flood risks or remediations).

Given that fire insurance and underwriting support evolved over more than 200 years, and that technical assessments of some risk factors like fire suppression sprinklers emerged only 40 years ago, flood risk underwriting likely has decades to go before an effective partnership can develop between the insurance industry and municipalities and other levels of government.

"...our industry will undergo fundamental and radical changes which will severely test the mettle of all the players in the league. 'To be sure, the 'good old days' are gone forever. Today's conditions, regarded by many as 'abnormal' are, in reality, 'but a mild rain shower compared to the storms of the future ...obviously, the future is no place for the faintheaded, the rigid traditionalists and the seekers of the status quo. The survivors will be the courageous, the alert, the flexible, the imaginative,
the planners and the managers of change. With the continued support of its Members, lAO would like to be counted among the latter."
Ted Belton's comments on the status ofthe industry at the end of 1980, following all time high 1980/1981 loss ratios.

Given current flood loss trends, Mr. Belton could have been looking out 35 years to today when investment earnings are low (again) in this low interest environment, and when extreme rainfall losses are on the rise. Imaginative change is again needed to develop a flood underwriting strategy.
Posted by Flood Advisor