High school science teachers and media have been saying that temperature increases associated with climate change cause a direct increase in water vapour and therefore, by association, more extreme rainfall.  This has been reported for years, like here in the Guardian where they say "A warmer atmosphere can hold more moisture, and globally water vapour increases by 7% for every degree centigrade of warming."

The Clausius-Clapeyron (C-C)
equation describes the water-holding capacity of the atmosphere as a function of temperature.

Geophysical Research Letters research looks at historical data to see if this theory linking temperature and rain intensity can be verified and what other explanatory variables are available. Researches from Lamont-Doherty Earth Observatory, Columbia University, MIT, and Institute Centre for Water Advanced Technology and Environmental Research (iWater), Masdar Institute of Science and Technology, and Department of Chemical and Environmental Engineering, Masdar Institute of Science and Technology analyzed how extreme rainfall intensities in the USA depend on temperature (T), dew point temperature (Td), and convective available potential energy (CAPE). The analysis considers geographic sub-region, season, and averaging duration.

What did researchers find in the data?:

"When using data for the entire year, rainfall intensity has a quasi Clausius-Clapeyron (CC) dependence on T, with super-CC slope in a limited temperature range and a maximum around 25°C

So Clausius-Clapeyron is only quasi-valid, meaning there is not a strong relationship between rain intensity and temperature. And rain intensities peak at 25 degrees Celcius ... they do not keep going up with temperature increases. The Guardian missed these details. Who else made the temperature-water vapour-rainfall relationship claim:

The magazine Science article How Much More Rain Will Global Warming Bring? touches on the 1 degree - 7 % atmospheric vapour relationship back in 2007. Bloggers around the world repeat this, and even David Suzuki is saying it. But lets look at more the the research findings based on actual data in Geophysical Research Letters. These charts show how rain intensities do not increase at the CC rate above 22 degrees: 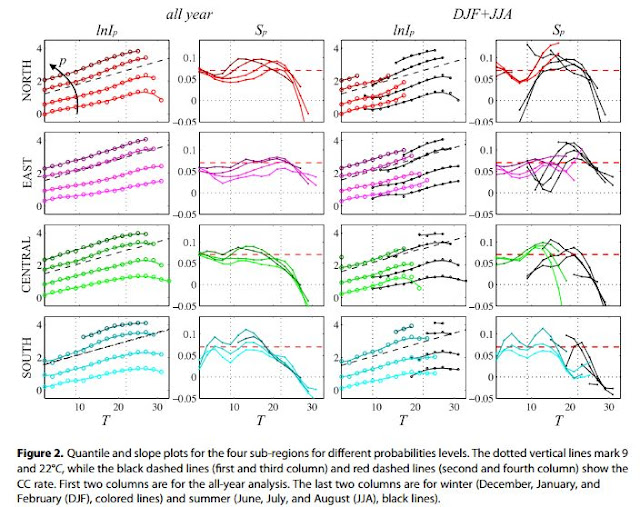 The fourth column of charts shows temperature T on the x-axis. On the y-axis is slope of the relationship between rain intensity and temperature. The dashed red line is the predicted CC rate, meaning above 22 degrees rain increases less that predicted by CC. So no, this theory does not hold water (pun intended). In fact for some of the highest temperatures for some quantiles in the North Central and South, slope is negative, meaning that increased temperature DECREASES rainfall intensity (black lines go below zero).

Looking at the third column of charts with LnP on the y-axis, we see that for several quantiles of precipitation in both winter and summer, LnP does not reach the predicted rate at all (coloured lines below the predicted rates shown in the black dashed lines). In plain english this means the predicted increase in rain intensity with temperature is never met for small storms, e.g., the ones responsible for erosion, etc. So the theory is flawed for small storms. 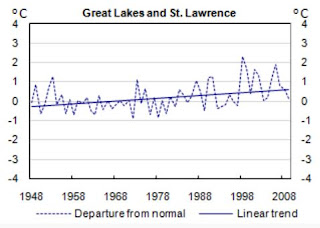 The take-away is that simple relationships make great theories. Real systems are more complicated than the Clausius-Clapeyron (CC) would suggest.

Lets look at something simpler in Ontario, Canada. Temperatures have increased. At right are temperature trends plotted by Statistics Canada. There is an increase from the late 1940's to 2008. Pretty clear.

Below are maximum annual observed rainfall trends for Toronto's long term climate station from Environment and Climate Change Canada's Engineering Climate Dataset Version 2.3, from the 1940's to 2007. It shows decreasing annual maximum rainfall for all rainfall durations from 5 minutes to 24 hours. Obviously the real world data shows us that despite increasing temperature, there is no corresponding increase in maximum observed rainfall. 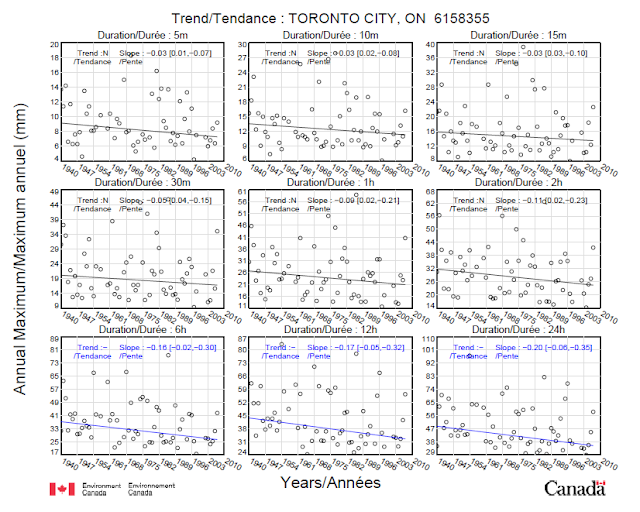 The hypothesis that rising temperatures result in higher water vapour and then also more extreme rainfall is rejected based on the observations in southern Ontario. While temperatures are up in Ontario, there are twice as many statistically significant decreasing annual maximum rainfall trends as increasing ones as summarized from the Engineering Climate Dataset (version 2.3):

Evidence-based policies for flood mitigation and other stormwater or water resources management activities first require accurate characterization of factors affecting runoff and flow conveyance in municipal and natural drainage systems. By hypothesizing that rainfall intensities are increasing as a result of higher temperatures, flood damage mitigation could be achieved by combating green-house gas emissions to stall temperature increases. Data shows that extreme rainfall is not increasing with temperatures, and therefore an increase in flood damages is due to other factors (e.g., hydrology, hydraulics) - as a result effective flood damage mitigation must focus on key drivers and not temperature or rainfall trends.

We cannot explain severe weather, extreme rainfall, tornados and hail in Ontario with simple relationships that have been shown to contradict observation data. 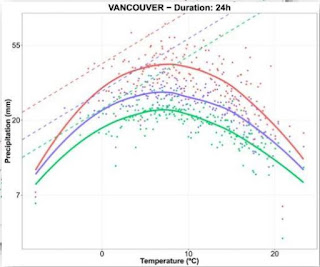 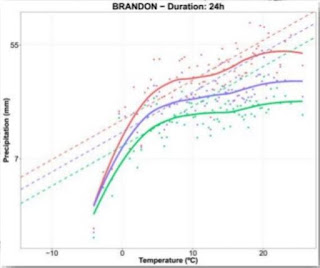 Canadian data analyzed by researchers at the University of Western also concluded that the Clausius-Clapeyron (C-C) equation did not match real temperature and rain data as observed in climate stations including Vancouver, Brandon, London and Moncton. As shown on the following graphs the real data relationships (coloured lines) do not follow the theoretical C-C scaling lines (dashed lines).

For Brandon, London and Moncton, the slope of the precipitation-temperature trend line is less than the theoretical dashed line for most positive temperatures. In Moncton the trend is flat, meaning higher temperatures above 5 degrees C do not increase precipitation.

Key conclusions of the Western analysis were:

"Summary
- The sub-daily daily maximum precipitation shows weak linear correlation to the daily temperature for most stations and durations. Only lower durations for Moncton, London and Brandon show correlations roughly identical to the theoretical C-C 7% per 0C rate. 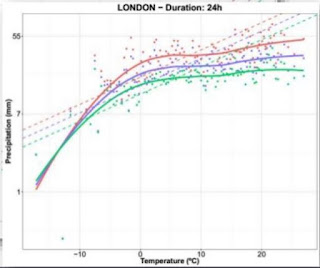 - For Vancouver station none of the sub-daily durations present linear correlation to temperature. For temperatures higher than 10 ºC negative slopes are observed.

Conclusion
- The Clausius-Clapeyron scaling rate clearly does not apply for any of the stations consider in this study, and should not be arbitrarily applied to derive IDF curves for future."

The analysis was presented at the ICLR Friday Forum in March 2017. 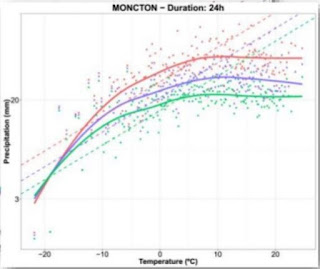 Researches also concluded that the use of Western's IDF_CC tool projections of future IDF would be preferred to any reliance on the C-C equation and its theoretical 1 degree = 7% scaling factor.