Overall costs appear to be increasing over time as shown in the following chart - to convert cost per acre to per hectare, multiply by 2.47 : 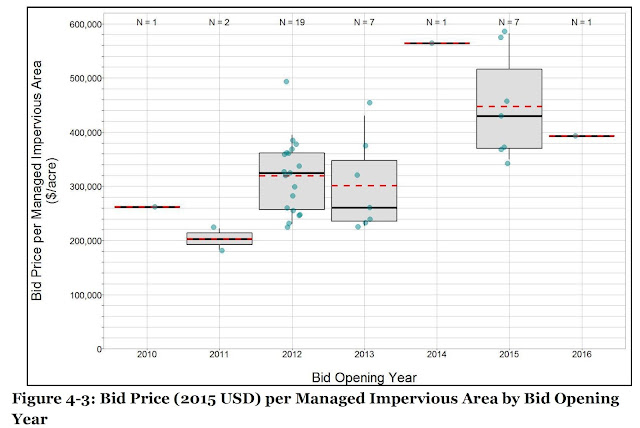 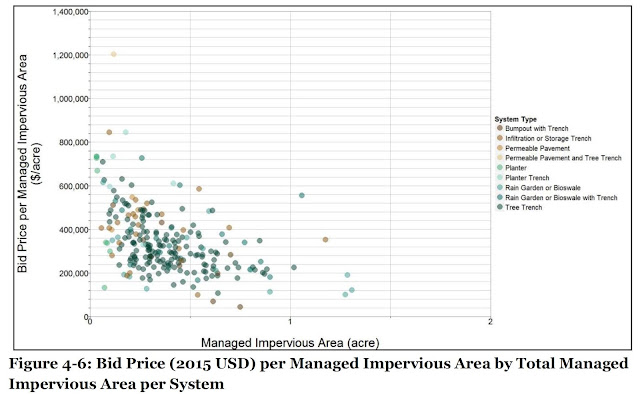 The following chart shows the range of cost, median and average cost per managed impervious acre. A high variability in costs is shown from project to project. 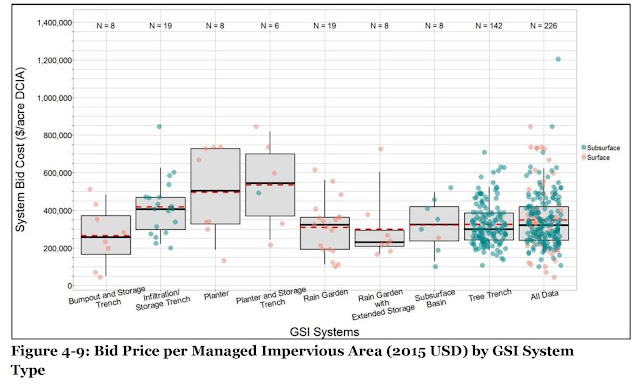 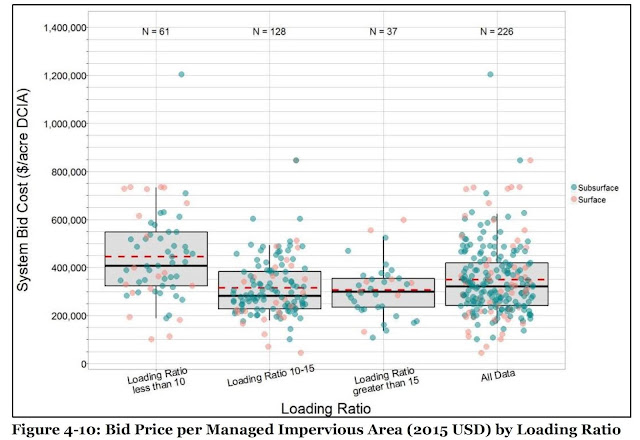 Operation and maintenance costs have been reported as well and show a wide variability. The following chart shows cost per impervious drainage area by broad type of green infrastructure, whether a subsurface or surface feature. The data indicates that surface features - those that are vegetated - cost on average more than subsurface features to maintain. 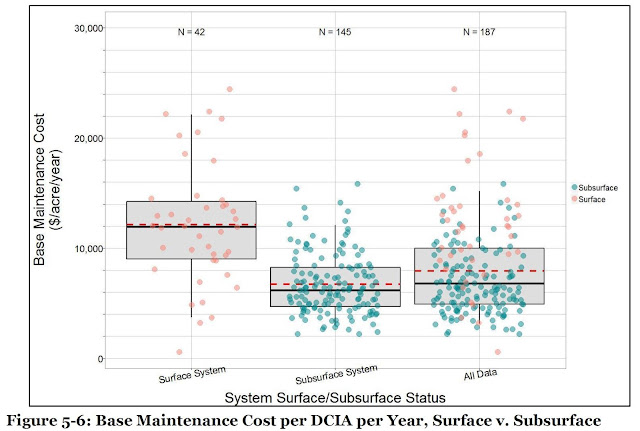 The average cost per impervious acre of $8000 equates to about $20,000 per impervious hectare. The following chart shows the variability in operation and maintenance costs according to each specific green infrastructure type. The chart shows for example higher costs for surface bumpouts and rain gardens than subsurface trenches and basins. For example, on average a bumpout costs almost twice as much as a subsurface basin. 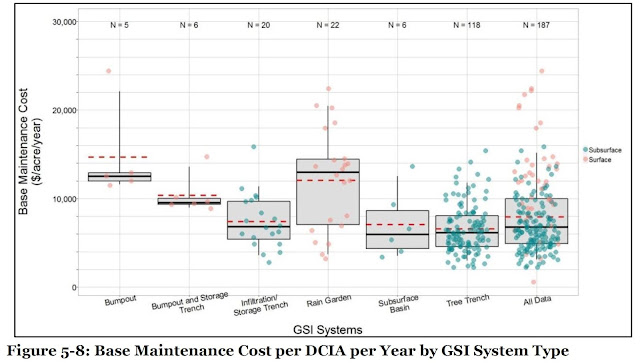 The operation and maintenance cost appears to be approximately $20,000/$872,000 = 2.3% of capital cost. Lifecycle replacement / reconstruction of green infrastructure features, based on their deterioration over time,  would generally add to this cost and could be considered to be 1-4% of capital cost depending on the service life of the feature (i.e., features that last 25 years add 4% depreciation, and those that last 100 years add 1%).

Using these unit costs, overall lifecycle costs for Ontario-wide implementation are explored below, assuming an initial 50-year build-out period and a range of green infrastructure measures with service life durations of 25 to 100 years.

The following table summarizes the unit costs and illustrates the Ontario-wide costs that should be a cause for concern.


The follow chart illustrates the time series of costs including initial capital construction, operation and maintenance ramp-up followed by sustained operation and maintenance, reserve contributions for lifecycle asset reconstruction / rebuild according to service life (assumed 1/3 25-year, 1/3 50-year and 1/3 100-year durations), and rebuild costs (starting in year 26). It is assumed that 50 and 100-year service life assets are rebuilt over 50 a 50 year period, similar to the initial construction period.

After the initial build, the average annual operation and maintenance and depreciation costs (that are reflected in the reserve and rebuild costs) is $15.8 billion.

Some academics, including those who promote green infrastructure for amenity or other stormwater management values, have proposed green infrastructure for the purpose of flood control as well. In order to achieve flood mitigation benefits, however, widespread implementation in the sewersheds or tributaries that have flood risks is required - in that case, the costs would appear to be prohibitive to achieve quantifiable flood reduction benefits. For illustrative purposes, a York Region 100 hectare catchment has recently undergone sewer capacity upgrades at a capital cost of approximately $20M and with nominal changes in net operation and maintenance cost (larger sewers replace older ones) and a 100 year service life - implementation was over 3 years. In comparison, the green infrastructure capital costs would be in the order of $872,000 * 50% impervious * 100 hectares = $44M with additional operation and maintenance costs and lower service life durations of 25-100 years, and long term implementation (over decades) with challenges on implementation on private properties, challenges with implementation in newer tributary catchment areas with low flood risk and high existing asset value (i.e., no co-benefits of watermain replacement, etc.). Basically, the conventional flood mitigation (grey infrastructure) approach is less expensive, has a shorter implementation time and more reliably addresses the flood risk issue (i.e., green infrastructure infiltration can aggravate wastewater inflow and infiltration stresses, can adversely affect foundations, and can be unreliable in high groundwater tables areas or during saturated conditions when green infrastructure storage in ineffective).

Some further case studies and detailed assessment are required to explore where and how some green infrastructure features can contribute to Ontario urban flood risk goals in a technically effective, timely and cost-effective manner. Similarly, analysis is needed to evaluate the strategic role of green infrastructure for achieving other stormwater management goals beyond flood risk mitigation.


These construction costs may be expressed as costs per area for projects. Considering projects managing 1 to 1.5 acres of impervious area the average cost per acre and hectare are summarized in the table below.

The article citing Onondaga County green infrastructure costs notes that lower costs can be achieved by bundling implementation with other roadway works. In those cases costs were $320,000 per impervious hectare, or approximately $288,000 per total hectare, assuming 90% impervious coverage in those street projects.

Excluding green roof measures, a annual maintenance costs range from about $500 per impervious acre (low range for infiltration trench) to $3300 per impervious acre for tree infiltration trenches. A typical cost would be about $1500 per acre per year ($3700 per impervious hectare per year) which is 1500/368,000 = 0.4% of capital cost. This is significantly below the Philadelphia unit cost of $8000 per impervious hectare. It is also significantly below reported O&M/capital costs ratios reported in the American Society of Civil Engineers' report Cost of maintaining green infrastructure. In that report O&M costs for infiltration trenches and bioretention ranged from 5-20% and 5-7% respectively per one source (USEPA 1999 summarized by Weiss et al. 2007), and 8% for bioretention per another (Normalized UNHSC Installation and Maintenance Cost Data).
Posted by Flood Advisor