Thinking Fast and Slow About Extreme Weather and Climate Change 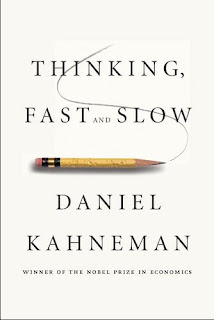 Thinking, Fast and Slow is a best-selling[1] 2011 book by Nobel Memorial Prize in Economics winner Daniel Kahneman which summarizes research that he conducted over decades, often in collaboration with Amos Tversky.[2][3] It covers all three phases of his career: his early days working on cognitive biases, his work on prospect theory, and his later work on happiness.
The book's central thesis is a dichotomy between two modes of thought: "System 1" is fast, instinctive and emotional; "System 2" is slower, more deliberative, and more logical.

The book delineates cognitive biases associated with each type of thinking, starting with Kahneman's own research on loss aversion. From framing choices to people's tendency to substitute an easy-to-answer question for one that is harder, the book highlights several decades of academic research to suggest that people place too much confidence in human judgment.
Source - Wikipedia 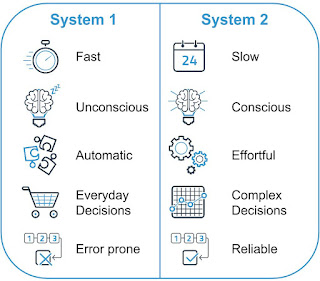 Why talk about this book on this blog? Because it can explain, through the lens of Kahneman's research, biases in our thinking and understanding of extreme weather, flooding and climate change.

Kahneman's research helps explain to how the media, the public, and groups without scientific resources substitute an easy to answer question on meteorology for the harder ones on urban hydrology, infrastructure hydraulics, multi-objective decision making, extreme value statistics and risk assessment.  Here are some examples of the biases in thinking:

Anchoring or focalism is a cognitive bias that describes the common human tendency to rely too heavily on the first piece of information offered (the "anchor") when making decisions. In the context of extreme weather and climate change, most people have been exposed to well-documented temperature trend data for example from Al Gore in An Inconvenient Truth, and may use this "anchor" when making decisions about extreme rainfall trends (i.e., they assume historical rainfall trends are the same as temperature trends): 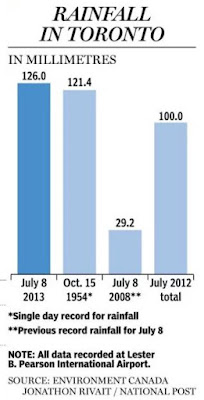 Having weather personalities report that after extreme storms we had more than a month's rain in x hours, for example, anchors the public's perception about the frequency, or rarity, of the event when in fact a statistical evaluation of rainfall extremes would show that exceeding average summer monthly rainfall totals is not rare.

For example, after the July 8, 2013 storm in Toronto, where 126.0 mm of rainfall was recorded at Pearson Airport, the National Post reported "Before Monday, the highest rainfall ever experienced in Toronto for July 8 was 29.2 mm set in 2008 — a record that was more than tripled".  Tripling records sounds extreme when referred to a particular calendar day and anchors perception of rarity - but calendar days statistics are irrelevant given that summer convective storms are uncommon and 2/3 of July days are dry - furthermore daily totals of a similar magnitude were recorded twice before in 1980 and 1954 (119.9 mm and 137.4 mm respectively), and the previous July 8 record was exceeded by 200% in 7 other years between 1950 and 2013.  Headlines or course try to emphasize the rarity of events, not the commonplace.


In presenting Insurance Bureau of Canada and Institute for Catastrophic Loss Reduction's  "Telling the Weather Story" to the Empire Club in 2012 (YouTube) Dr. McBean first presents trends on temperature and discusses them for five minutes showing undeniable trends in warming, and warming rate - this anchors listeners.  He then switches to rainfall but shows no data, and instead only a theoretical bell curve frequency shift (see 13:10 in the video), but then concludes storm frequency is increasing as well. The listeners' cognitive bias due to anchoring on temperature will allow them to readily accept rainfall increases as facts as well, as opposed to recognizing rainfall increases as theoretical speculation as fully explored in this blog post and slide deck and in fact confirmed by Environment Canada and the CBC in response to inaccurate reporting.

The availability heuristic is a mental shortcut that occurs when people make judgments about the probability of events by how easy it is to think of examples.  In the context of extreme rainfall, 24-hour weather broadcasting, and 24-hour new channels give the public many example of flooding events that skew the perceived probability of occurrence. Hurricane Katrina and Hurricane Sandy are examples of extreme flooding that the public can recall in the context of flooding, but that have little relevance to urban flooding caused by convective thunderstorms. Likewise for Tsunamis.  Other types of flood events caused in large part by operational issues and inherent vulnerabilities are recalled and mistakenly associated with extreme rainfall as the sole cause (Union Station flooding June 1, 2012 was due to construction pump bypass capacity specifications, GO Train flooding July 8, 2013 due to rail line vulnerability (being below known moderate frequency flood levels)).


The availability heuristic leads to systematic biases, demonstrated in the judged frequency of repeated events.  It is irrelevant
that GO Train rail area flooding occurred on December 25, 1979, January 11, 1980, March 21, 1980, April 14, 1980, February 11, 1981 and May 11, 1981.  Under the availability heuristic people tend to heavily weigh their judgments toward more recent information, making new opinions biased toward that latest news. Nobody knows that the May 29, 2013 flood was worse (higher rainfall in East York, higher flow and flood levels at Todmorden gauge near the site) - because the train schedule missed the flood timing! Nobody remembers Ivan Lorant's flood inquiry report for Premier Bill Davis in the early 1980's.  Nobody asked the Toronto and Region Conservation Authority if this was a flood prone area and if this extent of flooding was unusual at the GO Train flood site. Nobody asked the Port Authority if the lack of Keating Channel dredging in the past few years contributed to flooding, just like it did in the early 1980's before the inquiry.
Attribute substitution is a psychological process thought to underlie a number of cognitive biases and perceptual illusions. It occurs when an individual has to make a judgment that is computationally complex target attribute, and instead substitutes a more easily calculated heuristic attribute. This substitution is thought of as taking place in the automatic intuitive judgment system (System 1), rather than the more self-aware reflective system (System 2). Hence, when someone tries to answer a difficult question, they may actually answer a related but different question, without realizing that a substitution has taken place. This explains why individuals can be unaware of their own biases, and why biases persist even when the subject is made aware of them.

As rain first causes runoff, which then creates flow, which then causes flooding, it is easy to mistakenly correlate increased flooding to increased rainfall.  The alternative is analyzing the complex problems of urban hydrology changes that influence runoff, the stormwater management mitigation measures that can lessen some impacts of some development at some scales, hydraulic interaction in the flow systems including riverine systems (Lisgar District Basement Water Infiltration Assessment is a wonderful example in Mississauga, or Basement Flooding Areas 4 and 5 in Toronto (see page 4 in the Executive Summary on Black Creek interaction)) with the overland, underground separated, combined and partially separated sewers, hydraulic impacts of operational constraints (bypass pumping during construction, inadequate dredging), hydraulic impacts of environmental protection measures (provincial F-5-5 compliance, federal Fisheries Act compliance, etc.), and hydraulic impacts of development intensification on overland flow routes and interactions with underground systems and private systems.  It is much easier to focus only on rainfall. And, conveniently, everyone has an opinion about the weather. 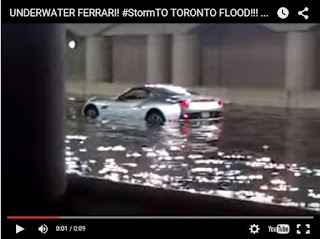 Many prominent organizations and individuals have established a cognitive bias based on temperature trends and have since applied Kahneman's fast and error-prone System 1 thinking approach to rainfall extremes.  The anchoring bias in media report emphasizes the rarity / frequency of events and ignores past events and other causes (operational or intrinsic vulnerability) of flooding - Environment Canada's extreme rainfall frequency and trend data is ignored. The availability bias of extreme flooding events reported through the media skews the public's perception on the true probability of events - it is very easy to find examples of flooded underpasses because these are designed to lower flood standards, but flood a lawyer's Ferrari in an underpass and it will be ingrained in the public's mind for a long time. Attribute substitution bias allows the public to simplify and explain flooding with rainfall (rain = flood) as opposed to thinking about the actual complex system (rain = baseline runoff + development runoff +- mitigation measures = flow +- capacity constraints +- operational factors = flooding).

Media support attribute substitution by ignoring even the most fundamental physical facts. For example, the GO Train flood on July 8, 2013 was cited as a 2013 Top Weather Story by CBC News as they associated the record at Pearson Airport with the flooding (record rain somewhere = flooding somewhere else).  They ignored the fact that Pearson is in the Etobicoke Creek Watershed, three watersheds away from the Don River Watershed where the GO Train flooded - this is basic hydrology: Mississauga rain = runoff in Etobicoke Creek, not in Don River). They ignored that no record rainfall occurred in the Don River Watershed as they were anchored to the Mississauga data 25 km away. 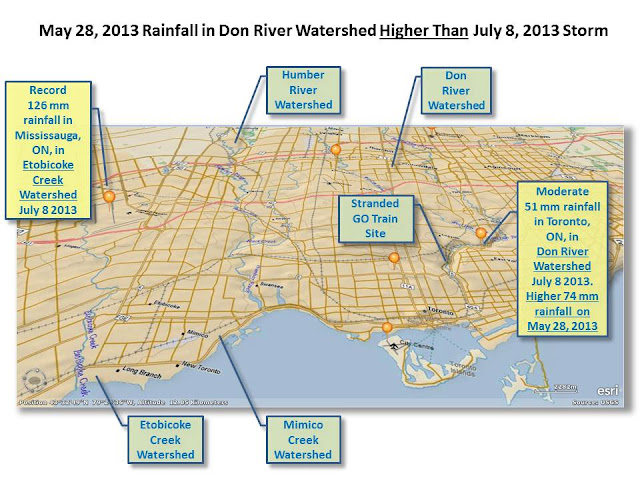 “There will still be times when someone accuses us of having lost our way, of having chosen the wrong priorities, and I know that can be hard to hear. But in moments in great and important choice, when the stakes are high, and the consequences are long-lasting, we have to test our assumptions.” Premier Kathleen Wynne, AGM, June 6, 2015


Testing assumptions requires Kahneman's "System 2" thinking - slow, deliberate and logical, as opposed to fast, instinctive and emotional in order to overcome heuristic biases in our thinking.

"People are not accustomed to thinking hard, and are often content to trust a plausible judgment that comes to mind."