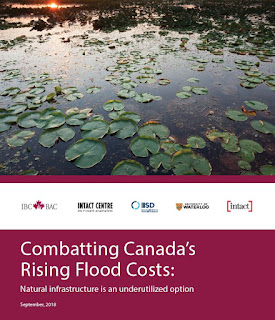 "The financial impacts of climate change and extreme weather events are being felt by a growing number of
homeowners and communities across Canada. The increase in P&C insurance losses is indicative of the growing costs associated with these events. These losses averaged $405 million per year between 1983 and 2008, and $1.8 billion between 2009 and 2017. Water damage is the key driver behind these growing costs."

A review of loss data suggests that water damage is not the key driver behind growing costs, represents less than a third of total losses and is decreasing slightly as a percentage of total losses. The following chart from the report shows total losses:

And this next chart shows the distribution of water damage peril losses up to 2008 and after 2008:

The values for the chart above are summarized in the following table:

A review of the "Combatting Canada’s Rising Flood Costs" report on the effectiveness of wetlands for flood risk reduction is explored in this post: https://www.cityfloodmap.com/2018/10/wetlands-and-natural-infrastructure-for.html

A review of the thoroughness of cost-benefit analysis (often meta-analysis, or incomplete analysis) in the "Combatting Canada’s Rising Flood Costs" report is in this post:  https://www.cityfloodmap.com/2018/11/storm-warts-floods-awaken-new-hope-for.html
Posted by Flood Advisor