Do We have Enough Climate Stations in Canada To Track Trends in Extreme Rainfall?

CBC New has also referred to this concept in responding to a complaint to the CBC Ombudsman regarding accuracy in reporting on extreme weather trends.  What has been cited as evidence of that decline is the chart in Appendix D in the ECO report above. CBC's Director of Journalistic Standards Paul Hambleton wrote:

"The report suggests several possible reasons for this inconsistency, including issues with data collection: There simply are not enough rain gauges. Rainfall data is collected using rain gauge buckets that can record both amount and intensity of rainfall. After a series of federal budget cuts in the 1990s, there are fewer rain gauge stations across the country than there were 60 years ago."

What does that chart show?  It summarizes declining manual stations in Canada and is a excerpt from the paper in Atmosphere-ocean An Overview of Surface-Based Precipitation Observations at Environment and Climate Change Canada (Mekis et al., 2018) - https://www.researchgate.net/publication/324041502_An_Overview_of_Surface-Based_Precipitation_Observations_at_Environment_and_Climate_Change_Canada

The chart of manual station count in Canada is Figure 2a in the paper on the left below. 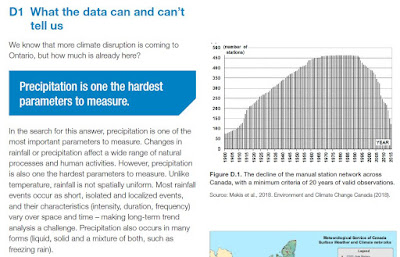 Readers of this blog will have seen extensive analysis of the trends in extreme rainfall across Canada, including annual maximum series and intensity-duration-frequency (IDF) trends.  The data used is that of Environment and Climate Change Canada, distributed in the Engineering Climate Datasets.

What do Engineering Climate Datasets show us in terms of number of stations that collect and analyze extreme rainfall and IDF trends - they have been increasing!  And the number of station-years of data has been increasing - that means more long-term data to support more reliable statistical analysis.  Good news. The following table summarizes the trends:

The newer datasets include more stations, a 22% increase in station count since 1990. And the number of station-years has increased by 48% since 1990 - that's almost 50% more data to analyze and derive IDF design curves since I graduated and started working in this field.

The Mekis et al. figure is shown in blue and the IDF station trends in orange. Obviously the decline in manual stations does not relate at all to the trends in IDF stations.  As noted in other blog posts, municipal IDF stations have also proliferated over past decades, complementing the IDF stations charted above. 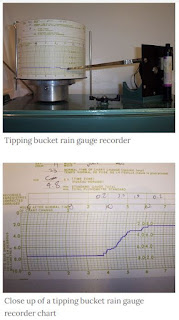 So when CBC's Paul Hambleton writes: "After a series of federal budget cuts in the 1990s, there are fewer rain gauge stations across the country than there were 60 years ago" he missed an important detail - yes manual stations that are expensive to operate have declined, as we expect.  It makes sense that we have fewer manual climate stations since 1990.
Technology changes.  A good summary of the changes in equipment is described by Mekis et al. - image above are from the website https://www.wikiwand.com/en/Rain_gauge that describes the history of rain gauges and their evolution.

IDF stations have increased from 532 to 651 stations since 1990, many with longer periods of record - we have more extreme weather data to rely on today!  The CBC and others should clearly be more careful when interpreting data on climate station and extreme rainfall  monitoring.