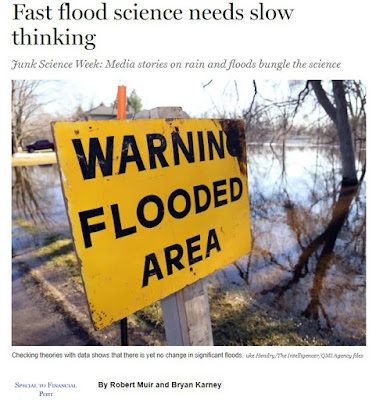 A recent special article in the Financial Post noted the difference between models and observations on extreme rainfall: link

Recent reporting by CBC and Radio Canada International (RCI) have reported shifts in extreme rainfall frequency, stating that there is confirmation that a warmer climate is now making extreme rainfall more frequent and intense.  The confirmation, however, was from models analyzed by Environment Canada, and not actual measured rainfall.

As pointed out in the Financial Post article, both CBC and RCI confused models with actual observed data in stating broad confirmations.  They overlooked limitations in the models to represent local events and extreme events, omitted data that showed all the models were wrong in some regions (projected increasing rainfall when data showed decreasing rainfall), and failed to mention that other climate effects like less snow in a warmer climate can decrease flood risk, mitigating precipitation increases.

Fundamentally, observed rainfall frequencies and model frequencies are not consistent, despite RCI and CBC reporting.  The following tables show the clear difference between what models project could happen and what actual data show has happened.

This first table relates to the recent CBC and RCI reporting on a North American climate model.  The model predicts that 100 year storms become 20 year storms (i.e., for a given intensity), meaning more frequent.  Alternatively, the model says that intensities of a given frequency are higher.  In contrast, the observed data for Canada show a slight decrease in 100 year intensities at 226 climate stations, meaning storms of a given intensity are are not more frequent, but rather slightly less frequent when recent data are factored in.

The CBC reported the above 50 to 35 year model shift as actually having already occurred in its In Our Backyard interactive: (see flooding tab) https://www.cbc.ca/news2/interactives/inourbackyard/
The CBC claimed that intensities in Toronto are greater today, resulting in more flooding.

While it is challenging to draw conclusions from trends at individual climate stations, shifts at a couple of  Toronto climate stations are shown in the 100 year and 50 year tables as well to check the CBC reporting.  The Toronto Pearson International Airport and Toronto City (aka Bloor Street) gauges have very long records to compare old and new intensities.

The old Pearson 100 year 24-hour storm intensity (top table) is now a  417 year storm, meaning it occurs much less frequently now.  Alternatively, the magnitude of the 100 year storm intensity has dropped from past to present, meaning such storms are less severe.  This decline occurred despite that climate station recording the large July 8, 2013 storm.  The 50 year storm is now a 108 year storm, again less frequent than before.

Clearly local data at Pearson Airport, just outside of Toronto is not changing the same way that the Canadian model projections are.  Observed frequencies are longer, while the model estimated them to be shorter.

To not rely on just a couple Toronto stations, one can look at at changes in intensities at all long term southern Ontario climate stations that have recent data updates.  Comparing the Engineering Climate Datasets v2.00 with data up to 2007 and v3.10 with data up to 2017 one can see a slight decrease in 50 year and 100 year 24-hour intensities, on average.  The stations and their lengths of record are shown below:

Overall, there are 978 station-years of data to analyze trends.

In southern Ontario the 100 year 24-hour intensities decreased by 1.0% while the 50 year intensities decreased by 0.9%, when additional data was added.  This suggests that the regional trends in Toronto per the Toronto City climate station, showing no overall change, are consistent with other stations in the region.  The southern Ontario data does not support the North American or Canadian model estimates reported by CBC and RCI that expect shorter return periods and higher intensities.

So beware of media reports that mix up models with actual observed data.

The following image expand on the tables above, showing where CBC and RCI made reference to the climate model results, and the text used to describe 'confirmation' of changes in rainfall.  Links to comparison charts (some that were in earlier posts) and tables are also included, showing the actual observed data trends and indicating Environment Canada source material.