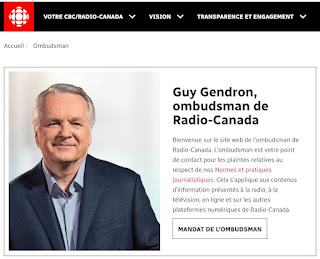 Radio-Canada found one of their journalists has again violated the Journalistic Standards and Practices when reporting on historical extreme rainfall trends linked to climate change.  This is Ombudsman Guy Gendron's review in french:

And here is the link to the english translation on that page:

The violation relates to Radio-Canada's standards for reporting accuracy and for handling corrections related to this story:

The review is quite harsh.  The Ombudsman found errors in the original article and in the corrections to the article based on our complaint, and summed it up this way (my bold):

"When it comes to accuracy, the JSP expects us to “seek out the truth” and “invest our time and our skills to learn, understand and clearly explain the facts.” The article failed at all these levels. The article’s errors, omissions, imprecisions and inaccuracies are so numerous that I believe it is an aggravated case of failure to comply with the JSP. Since this seems to have been a repeat offence on the same subject by journalist Marc Montgomery, I cannot hold him solely responsible. This is also an issue of inadequate editorial oversight.

Given the scope of the observed failures, I doubt it is possible to correct an article that is so flawed through and through. If Radio Canada International decides to amend it, I strongly recommend that the task be assigned to another journalist, preferably someone who has demonstrated their ability to cover environmental topics.

Moreover, I think the problems encountered cannot be attributed to the complainant’s overly high expectations in terms of technical considerations that would be incomprehensible for average readers. News stories must simplify concepts that are sometimes complex, but without distorting the meaning."

In the thorough review, the Ombudsman checked the references that the journalist cited and found that the article distorted the meaning, misleading readers.  For example he wrote:

"All in all, I believe the article misleads readers with respect to ECCC’s position on the frequency and severity of rainfall events by implying that the study “confirms what many have been saying,” namely that rain “becomes more extreme,” at least as far as Canada is concerned."

He noted that the article had material that was "incongruous" and "awkward", and that corrections had lacked "transparency" and "humility" and one instance was deemed "false".  When describing the amount of errors associated with the documentation and attribution of corrections he wrote:

"It would be difficult to qualify all these errors, omissions, imprecisions and inaccuracies as having occurred merely by chance."

The Ombudsman seems to suggest that there are other factors, or perhaps motivations, that result in such extensive problems with the reporting.

Here is how the review concludes listing the shortcomings in meeting Radio-Canada journalistic standards:

"Here is a summary of the article’s main shortcomings:

The title is still problematic.

The choice of photos and the selected excerpts from the ECCC study imply that the title confirms an already observed increase in extreme weather events in Canada.

The juxtaposition of the citation from Blair Feltmate of the Intact Centre on Climate Adaptation – dating from 18 months earlier – enhances that false perception.

The wording for the link to the ECCC report incorrectly credits Natural Resources Canada.

The June 9 note explaining the first changes to the article falsely and unnecessarily identifies Xuebin Zhang for the “suggestion” concerning changes to the title.

That note lacks transparency about the changes made and it lacks clarity in its formulation.

In addition, that note states that the title was “very slightly modified,” which is superfluous in any explanation for a correction, especially a title.

The September 21 note explaining that a sentence regarding damage claims from extreme weather had been removed also fails to be transparent and frank by attributing it “to another study” rather than dismissing it as did the ECCC report, which is actually cited as a reference at the bottom of the article.

Lastly, various details illustrate the lack of rigour applied to this article even though it was reviewed and corrected multiple times: one sentence ends with a semi-colon and another with a comma, Ontario is misspelled as “Ontarion,” and the legend under the third photo is poorly written (containing an extra and).

The reference to the title being problematic is fundamental since it says "Climate change: Environment Canada confirms rain becomes more extreme" but the cited material does not support that when it comes to extreme rainfall that drives flood damages.  The Ombudsman rightly acknowledges that the Environment Canada research paper cited confirms that 1 to 5 day "heavy rainfall" has increased (let's call that more "soggy days" that will keep our lawns green, and grow mushrooms), but the study did not confirm that the extreme short duration rainfall that leads to flooding has increases - increases in those rare, severe events have only been projected in models and not confirmed with observations.  The Ombudsman cites the Canada's Changing Climate Report on this fact, noting the cited paper does not confirm extreme events has increased:
"It therefore does not confirm that those extreme events have increased in Canada, as the RCI article would lead us to believe. In fact, according to Canada’s Changing Climate Report, which journalist Marc Montgomery should have read because he references it in his article, current data does not show any increase in those extreme events. Here is what the report specifies on page 155:
For Canada as a whole, observational evidence of changes in extreme precipitation amounts, accumulated over periods of a day or less, is lacking.
Later, a chapter is devoted to “extreme precipitation” and the first section covers “observed changes.”
The opening sentence of that section on page 168 is:
There do not appear to be detectable trends in short-duration extreme precipitation in Canada for the country as a whole based on available station data."
***

CityFloodMap.Com blog readers will know that we have reported on these extreme rainfall trends across Canada and confirm that rare, extreme rainfall intensities (say with return periods of 20, 50 or 100 years), have decreased at 226 Environment Canada climate stations, according recent Engineering Climate Datasets updates.  This is a blog post with further details on actual overall changes in extreme design rainfall intensities:

Here is a summary graph:

The orange to red dots are 20 to 100 year intensity changes from the Version 2.00 rain intensity datasets to the Version 3.10 datasets.  They are on average less than 1.0, meaning decreasing intensities overall in the new data: 5-minute duration 100-year return period rainfall rates are 1.6% lower on average.  Short duration trends are on the left and long durations on the right.  The green dots are small frequent storm trends - those are up a bit for short durations, but not so much for long durations.  The biggest decreases are for short duration extreme rainfall (the orange and red dots on the very left).

And here are the data behind the chart above:

As the intensity of small storms has increased (0.6% for the 2 year return period) one can see that the Environment Canada study cited by Radio-Canada can be right about 1-5 day heavy rainfall ("soggy days" from small storms) increasing without the rare, flood-causing 20 to 100-year extreme rainfall increasing.

Prior to submitting the above complaint that Mr. Gendron reviewed, colleagues and I had provided both Radio-Canada and CBC Ombudsmen with a detailed review of their June 2019 coverage of the cited Environment Canada research.  Our review contained several recommendations to help improve the accuracy of their reporting on the topic of extreme rainfall and key causes of flood damages.  That review was supported by input from Environment Canada as well, specifically related to the June 2019 reporting.  Thank you to those in the academic engineering community and professional engineering practice for contributing to that review.  It appears the Radio-Canada and their readers can benefit from that shared knowledge and insight into a complex topic that has been consistently mis-reported in the past.  See a previous review of Radio-Canada and CBC reporting errors on this topic in this post: 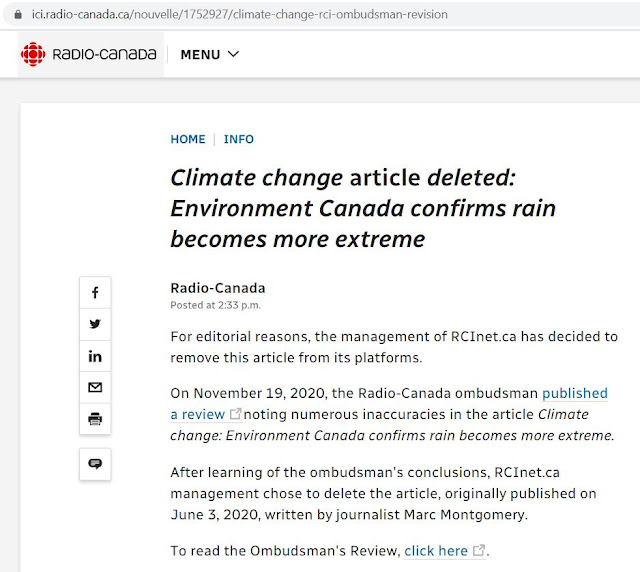 For those interested in seeing the original article that was removed by Radio-Canada management, here is the text:

A new study by Environment and Climate Change Canada (ECCC) confirms what many have been saying, that climate change has made rainfall events more frequent and more severe and the changes are dominated by human activity. This includes burning of fossil fuels, but also development onto natural green spaces for such things as agriculture and expansion of cities.

The report in the scientific journal Proceedings of the National Academy of Sciences (USA) is entitled, ‘Human influence has intensified extreme precipitation in North America’

Residents near the Ottawa River in Cumberland, a community in Ottawa, shore up their properties against a flood in 2019. Communities all along the Ottawa River were threatened by record water levels. (Judy Trinh/CBC)

The study indicates that, “Recent years have seen numerous flooding and rainfall-related extreme events in North America, totaling billions of dollars in damages”;

The report begins with a statement that humans have strongly contributed to the changes noting that while past studies have, “identified an anthropogenic influence on extreme precipitation at hemispheric scales, this study finds robust results for a continental scale. We establish that anthropogenic climate change has contributed to the intensification of continental and regional extreme precipitation”.

The report shows that the so-called ‘one-in-20, 50 or 100-year’ events can be expected to occur with far greater frequency with just a 1-degreeCelsius temperature increase over pre-industrial averages, an increase that has already occurred. It notes with that increase a so-called ‘100 year’ event might occur every 20 years. With a 3-C increase, such extreme events would occur with even far greater frequency,

In January last year, Blair Feltmate, head of the Intact Centre for Climate Adaptation at the University of Waterloo in Ontario indicated that Insurance Bureau of Canada payouts for extreme weather claims have doubled every five years since the 1980’s.

A sudden intense storm with a possible tornado swept through southwestern Ontario in September 2019, with record breaking rainfall and leaving broken trees and damage and many without power. (submitted by Steve Biro-via CBC)

Moudrak says the study further underlines the need for changes to city zoning laws, redrawing of flood plain maps, change in stormwater management and designs, and for building codes to change to reflect new extreme weather realities, a process she says that has already begun in many cases but needs to continue.

Several experts have said preservation and restoration of wetlands and green spaces should also be taken into future plans for flood controls.

NOTE: Jun 9: the title has been very slightly modified to specify ‘rain’ at the suggestion of ECCC scientist Xuebin Zhang who also suggested noting human activity as fossil fuel burning and development onto green spaces.

Sep 21: a sentence regarding damage claims from extreme weather mistakenly referred to another study than the one cited here and as such has been removed.