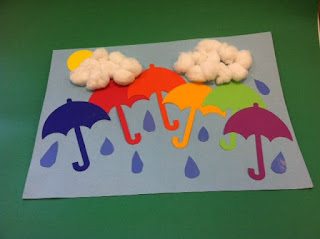 Updating intensity-duration-frequency (IDF) curves used in drainage design gets plenty of attention, especially as it relates to climate change shifts. But is the focus misguided when it comes to urban flood risks?

A review of design rainfall patterns derived from Toronto-area IDF curves suggests more efforts should be placed on rainfall pattern (hyetograph) review instead - urban catchment risks may in fact be overlooked and underestimated when watershed scale storms are applied over flashy, high risk city drainage systems.

First, lets agree that all runoff simulation models are wrong but some are useful. Also, all synthetic design rainfall patterns are fictional, but can be quite useful depending on how they are applied - scale is an important consideration in this. Many watershed-scale storms are applied across smaller urban tributaries that respond to short duration rainfall intensities - the small tributaries feed in along the length of the large watershed or lie across headwater areas.

So you could ask: What is the value in reviewing IDF curves for climate change trends or other updates when they are then applied in such an unconservative manner when developing watershed hyetographs? The short duration Carruthers Creek rainfall intensities are underestimated by an order of magnitude compared to today's IDF data.

In the Toronto area, most urban drainage capacity issues and damages are associated with the small, local catchments and systems as opposed to the large river systems. This reflects great efforts and results in mitigating riverine flood risks following Hurricane Hazel. Quantitative analysis shows that basement flooding is concentrated on 'table land', as opposed to along flood-vulnerable valley systems. Accordingly, extreme rainfall characteristics that govern table-land flooding must be given adequate attention. Many watershed-scale design storms that may be appropriate for assessing river flood risks do not adequately characterize the short-duration, high intensity rainfall intensities documented in today's IDF data.

On the positive side, municipalities responsible for assessing and remediating urban flood risks often use design hyetographs that reflect the short duration high intensity behaviour of IDF data. Many municipalities use "Chicago storm" rainfall patterns  (Keifer & Chu, 1957) which preserve the IDF intensities for those short durations that are critical in urban flood risk management.

The SCS Type II storm can also be applied in a manner that preserves the high rainfall intensity in the original cumulative fraction of rainfall curve. The US Department of Agriculture has a spreadsheet that can be used to provide rainfall fractions at 1/10th of an hour, or 6 minute, intervals:

Some caution: even when high intensities are preserved, some design rainfall patterns may not be appropriate in different hydrologic settings according to some agencies. The Ontario Ministry of Transportation (MTO) notes the following applicability when selecting synthetic storms: 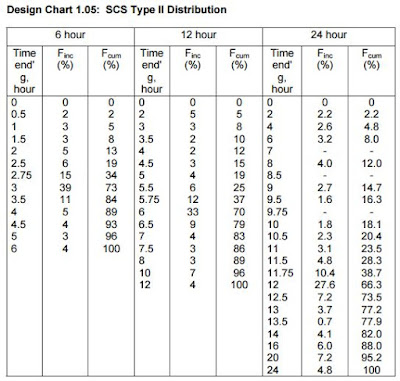 According to MTO, some watershed design storms may not be appropriate for rural land uses areas with less than 20% impervious area. When they are used, MTO provides a design chart in Part 4 of the Drainage Management Manual that shows the peak intensity increments. For example, in the SCS Type II 6 hour storm 39% of the rain falls in the peak 15 minutes from 2.75-3.0 hours. In the 12 hour storm, 33% of the event rainfall occurs in the peak 15 minutes from 5.75-6.0 hours. And lastly, for the 24 hour storm, 27.6% of rainfall occurs from 11.75-12.0 hours. Some "SCS" watershed storms in TRCA's jurisdiction flatline over 30 minutes to 2 hours which does not meet the MTO peak 15 minute characteristics, for rural land uses.

TRCA does incorporate short duration design storms in some watersheds, including the 1-hour AES storm in the Dunbarton Creek and Pine Creek watersheds and the 4-hour Chicago storm for Krosno Creek. Details are in the TRCA criteria document (Table 3-1: TRCA Stormwater Quantity (Flood) Control Criteria). The longer duration TRCA watershed storms should be applied with caution on small urban catchments where 100 year return period conditions could govern local regional storm flood conditions, and where IDF data may not be reflected in short duration rainfall rates.
Posted by Flood Advisor