The Office of the Parliamentary Budget Officer released a report Estimate of the Average Annual Cost for Disaster Financial Assistance Arrangements due to Weather Events. It is great to focus attention on flooding but the explanation of causes has gaps, particularly overstating long duration rainfall trends. But it seems the scientists have been muzzled from sharing real data and so some truth is lacking.

Its also is great that the insurance industry, who had input the the PBO report, is no longer saying rainfall intensities are increasing across the country due to climate change and causing flooding. But the report notes on page 26 under Effects of Climate Change:

"One last factor, which is likely affecting the intensity of floods in the Prairie Provinces, is climate change. The warming in the arctic has been associated with persistent weather systems in the mid-latitudes as well as extreme weather events. Consistent with this, multiple-day rain events have significantly increased in the Prairie Provinces and in the Rockies. The recent record setting multiple-day rainfalls in south-eastern Saskatchewan in 2010 and 2014 are likely examples."

What does Environment and Climate Change Canada data show about the intensity of multi-day rainfall? They don't publish multi-day statistics in the Engineering Climate Dataset but they do track trends up to the 24 hour periods - we can look at those as an indicator of longer duration trends:

(updated to distinguish Alberta and BC trends above:) In Manitoba there are no significant trends, only mild trends up and down. In Saskatchewan, there are some statistically significant downward trends (Davin 5 and Diefenbaker International Airport stations - see charts at right) and mostly non significant up and down trends. In southern Saskatchewan, there are more decreasing than increasing trends. In Alberta there is one statistically significant upward trend in 24 hour rainfall volumes - this is for Edmonton City Centre Airport, but is for records up to 1993 (i.e., not a recent trend). In BC, statistically significant increases include Yoho Nat Park Boulder Cr, but that is a short term record of only 14 years, ending in 1988 (i.e., short and not recent), and also include Blue River Airport and Creston WPCC (both more recent records).  So the PBO statement "multiple-day rain events have significantly increased in the Prairie Provinces ..." appears inaccurate but could apply to isolated areas. This is a link to an interactive map: 24 hour rainfall trends.


Note that short duration climate records can have an upward bias in trends that is not related to underlying changes (like due to climate) because the probability distribution of rainfall extremes is skewed (minimum bound of zero and long 'right tail' extreme events). To look past this statistical sampling bias, we can review longer record climate stations. The following table shows trends for Manitoba, Saskatchewan, Alberta and British Columbia stations with more than 25 years of record, observations since 2000, and locations east of longitude 120 degrees west (about east of Kamloops) to avoid the coast (note table is updated). 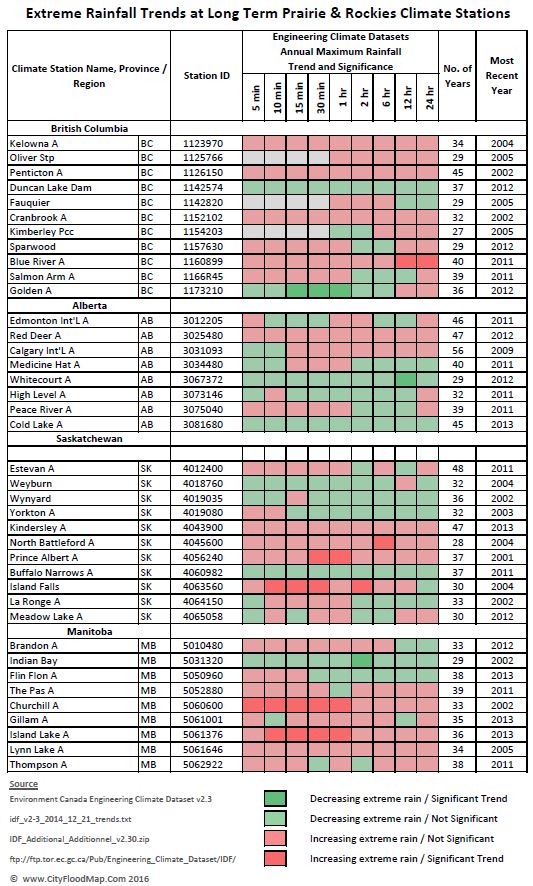 The table of long term stations with recent data shows the following:
Some Saskatchewan climate stations have decreasing rain intensity trends over most durations, including 24 hours - these stations include Buffalo Narrows Airport in the north and Weyburn in the south.

The map below includes  the south eastern Saskatchewan area that the PBO report notes has had "recent record setting multiple-day rainfalls". The 24 hour rainfall trends do not show increases in observed rainfall trends, however this may not account for the noted 2014 event. It is unlikely that the PBO report statement "multiple-day rain events have significantly increased in the Prairie Provinces" is accurate.  Long duration increases are more prevalent in eastern British Columbia and Manitoba, while Alberta and Saskatchewan have mixed trends including downward and upward intensities.

The problem with the PBO report is that it seems to make the common mistake in rain intensity reporting - i.e., that the plural of anecdote = data. Of course it does not equate to data, and so two events should not be cited as the rationale for identifying significant trends. Citing two storms to make a trend conclusion demonstrates the "availability bias" in reactionary thinking that we have explored previously. Evidence-based policies for flood risk mitigation will require Kahneman's System 2 thinking with detailed, methodical analysis and not "anecdotal statistics".

Single events, even record-setting ones do not necessarily change rainfall trends. Recently the July 8, 2013 storm set record rainfall amounts in Mississauga, Etobicoke and west Toronto areas. Despite this record, the statistical trend is downward for the Pearson Airport climate station, as shown in the following graph:

And derived return period rain intensity values, i.e., representing extreme storm probabilities, do not necessarily increase following a record event as shown in the following progression of IDF values over the past decades. These 24 hour design intensity values are derived from the observed trends and include values with probabilities from 2-year up to 100-year (1% chance per year):

Apparently for many one data point is enough for a theory.

For the PBO report, two data points can define a significant trend across an entire region, skipping over mounds of data in between.