The report is available at this link. Yes it is dated (2002) and predates several extreme rainfall events in Southern Ontario and Alberta, but it is valuable in that it shows how unusual, extreme weather events and disasters - even more recent ones - should be evaluated to answer the question "Are recent unusual weather events and related impacts and disasters caused by natural variability or climate change?"

As stated in the report "The following provides an update on that analysis through a case-by-case discussion of various types of unusual weather events that have occurred in Canada and elsewhere over the past five years or so." It explores a range of topics:

Its a long list and the assessment of events in each category need a separate review. Unfortunately its hard to get down this list before an internet ad "Once beautiful celebrities - look at them now!" diverts our attention. Its pretty easy to exercise our "anchoring  bias" and think about the first row 'temperature' and then lump all the other difference processes in the same boat and think "Yeah, they are all changing the same way like temperature is". More on our cognitive biases involving extreme weather is posted here. So kudos to Environment and Climate Change Canada (formerly Environment Canada) for encouraging the slow, conscious, effortful, complex yet reliable evaluation process needed to answer questions on extreme weather and climate change - also showing good scientific rigour, data sources are included for each evaluation.

River Flooding: "There is no evidence that the total number of extreme precipitation events has increased across all of Canada in recent decades. However, intense spring rainfall events have become more frequent in eastern Canada."

"As with severe droughts, intense floods occur from time to time as part of natural climate variability,
and individual events cannot be directly attributed to global causes."

Storms: "There is no evidence to suggest that thunderstorms, hailstorms or lightning are occurring
more frequently."

"However, a Canadian study of tornadoes in the Canadian Prairies indicate that these are now occurring earlier in the year, consistent with warmer spring temperatures. "

So what does Environment Canada say more recently about storm frequency? No change again. Last year in response to an insurance broker cbcnews.ca interview on increasing premiums and claims saying "A lot of it has to do with the frequency of the storms and I think you could even extrapolate that it's got to do with climate change," ..."we're getting 20 times more storms now than we were 20 years ago." Environment Canada offered this correction in late 2015 that cbcnews.ca has posted:

This above statement saying no changes is related to Southern Ontario, but is not unlike other regional short term rainfall trends across Canada as noted by Environment Canada scientists in a 2014 journal article - their research still shows "no detectable trend signal", despite recent statements by the Insurance Bureau of Canada that would suggest otherwise.

In the CO2 / Climate Report, Environment Canada discusses predictions about future changes as well. Regarding storms they note "Other studies project that heavy summer rainfall events (>25 mm/day) over central North America may increase in intensity by about 150%. These have led IPCC to conclude that more intense rainfall is very likely over many areas, and that flood magnitude and frequency are likely to increase in most regions".

So can we check if the number of days with greater than 25 millimetres of rainfall is going up? Or is the opposite trend happening? This 25 mm frequency characteristic is also described in Toronto's Future Weather & Climate Driver Study by SENES in 2012 - but it says the number of those storms will go down, not up like IPCC says - a total contradiction. As noted in the SENES summary report, using a fine scaled climate model customized for Toronto, the "Number of Days with More Than 25mm", deemed Extreme Rainfall, would decrease from 16 days in 2000-2009 to only 9 days in 2040-2049. This graph shows trends at Toronto Pearson Airport from 1993 to 2012:

The data shows that the number of 25 mm days has increased a bit as shown by the dotted trend line- but the R-squared is only 0.016, so that is a very weak trend. What about absolute numbers? The average has been 4.1 days over this 20 year period, so the SENES current climate value of 16 days and the future value of 9 days is off the chart and going in the opposite direction.

The daily maximum rainfall trend is flat and essentially random with r-squared of 0.00001. The average maximum daily value is 42.5 mm which is much less than the existing maximum SENES value, but the prior observed maxima in the mid 60's range do correspond to the SENES 2000-2009 value. Including the 2013 July 8, 2013 value would also support the upward direction of maximum daily values at Pearson (126 mm observed), but data at other Toronto gauges (only 51 mm was recorded in at the Toronto East York Dustan climate station (ID 6158751) for example).

The trend in daily maximum can also be assessed by the change in return period values representing common 2-year to rare 100-year return period intensities. The following table shows trends in 24-hour intensity values for 4 periods up to 1990, 2003, 2007 and 2013. The intensity trends are flat or decreasing as the last 23 years of record have been added, suggesting the maximum daily rainfall depth is not increasing as suggested by the SENES climate model.

When the basic values are so far off the existing data and initial trends predicted by climate change models, one has to seriously question the value of the weather prediction exercise. And given IPCC says 25 mm storms will increase, the SENES' Toronto study says they will go down, and real data shows no trend in these frequent events (i.e., the 2-year intensity is flat 1990 to 2013), you have to wonder that the value is for climate model predictions. Environment Canada provides a similar caution on Global Climate Models (GCMs) in the CO2 / Climate Report saying:

Looking at average maximum daily values, the SENES data is more in line with Pearson Airport data for existing values as shown below. But the Pearson data shows no upward trend as would be expected if the average daily maximum is to increase from 48 mm per day now to 86 mm per day in the future period. The actual data trend is very flat and random: 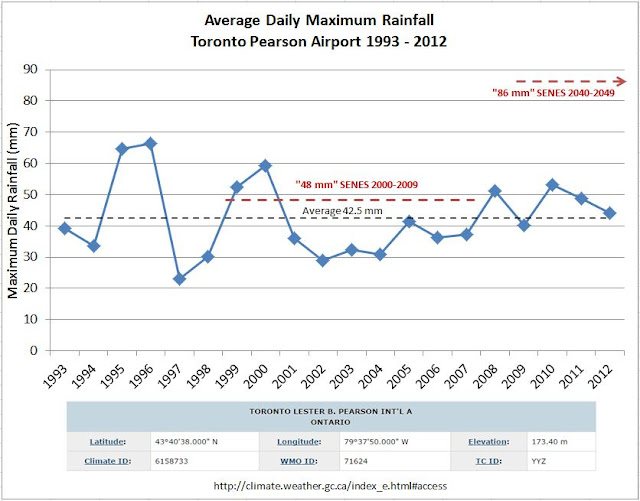 It would seem that despite SENES' efforts in downscaling a Toronto climate model, there is still little conclusive guidance that can be seen and that can help inform drainage design standards and flood risk mitigation efforts. While it is understandable that predicting extremes is not possible for extreme weather events, the fact that the average rainfall trends are not moving as climate change models predict is a concern.  The premise of IPCC and others is that if the weather means change so will the weather extremes and the temperature changes will drive rainfall changes - so if data is actually showing the rainfall mean parameters are constant, the conclusion must be that i) temperature changes are not driving rainfall changes, and ii) rainfall extremes are not on the rise. This would be consistent with Environment Canada's earlier conclusions:

"Weather events beyond the expected range of weather behaviour to which local ecosystems and socio-economic infrastructure have adapted over time can have major ecological, social and economic impacts. Some of these impacts can be beneficial, but most are deleterious.Some of the recent climate trends and events, internationally and within Canada, cannot as yet be distinguished from those that could occur due to natural climate variability."

Separating the facts that there are indeed impacts from extreme weather that society has not adapted to (system capacities are too small for old weather and today's weather), from the premise of many that the weather has changed significantly due to climate change is an ongoing dilemma for those charged with advancing data-driven, evidence-based approaches to flood risk mitigation.

Those linking the 2016 Fort McMurray wildfire directly to climate change factors should strive to follow a rigorous review process as followed by Environment and Climate Change Canada in their climate report. ECCC offered the following:

"Average annual forest losses in Canada due to wildfire since 1980 is about 2.4 million ha. This
appears to be a significant increase from the average losses in the decades prior to 1980, at least partly due to a long term natural cycle involving an aging Canadian forest more prone to fire. However, there is also evidence that climate may be an important factor. Annual loss rates vary considerably from year to year, largely due to changes in fire weather conditions."

SENES predicts changes in extreme rainfall too - check out link to this post for actual trends in extreme rainfall (IDF frequency analysis for Toronto City / Bloor Street and Pearson Airport climate stations). We show that even with the large July 8, 2013 event included, the daily trends are down or flat at Pearson and consistently down in central Toronto.

Given the facts on rainfall trends, we clearly need Design Standard Adaptation instead of Climate Change Adaptation to address the current extreme weather impacts.

Urban flood risk under climate change - Mississauga study ignores basics of hydrology and floodplain hydraulics to say a lot about nothing.
Posted by Flood Advisor