Reporting on the Windsor and Tecumseh flooding in September 2016 and August 2017 highlights the gaps in extreme weather reporting in Canada .. and amnesia regarding past events... and the unwillingness to explore other factors affecting flooding, like hydrologic changes.

The Fishy: CBCNews reports "I've never seen anything that intense in the 35 years I've been in this region," (Tecumseh Mayor Gary ) McNamara said. "This is unprecedented."

But the event was not unprecedented in the region. Water resource management and civil engineering professionals know that the region has recently experienced a much greater storm. Even CBCNews reported on the anniversary of the Harrow Storm 27 years ago : they reported in July 2014 on the Harrow Storm of July19-20, 1989:

"A massive, stationary storm dumped 450 mm (17 inches) of rain on Harrow and Colchester South in the matter of hours in southwestern Ontario.|

The Fishy: "That beat the record for that date in history, which was formerly 36.8 mm set back in 1973." ... this is a fishy statement because drainage systems are not designed to specific calendar day rainfall characteristics. In fact annual series of maximum daily, hourly, and 5 minute intensities are used to characterize weather. This is a typical headline-grabbing technique such as when the July 8, 2013 storm in Mississauga was reported to be triple the maximum record ... ummm... for a calendar day that usually does not receive hardly any rain. This inaccurate reporting sets up the 'anchoring bias' in the readers' perception of the rarity of the event.

The Fishy: Reporting records based on 'calendar day' is wrong. No rainfall statistics are derived based on calendar day for the purpose of analyzing extremes or designing infrastructure. Can you imagine if we designed bridges for the number of heavy trucks that cross them on August 28ths? That would be silly - it is easy to find the historical August 28 rainfall numbers, but it is meaningless to measure the severity of storms relative to that isolated calendar day record.

The Weather Network's Chris St. Clair says on the October 1, 2016 morning broadcast that the Windsor storm was "unprecedented" ... its not clear if he meant unprecedented for September 29th's, which is irrelevant, or unprecedented for the region on any calendar day which is plain wrong. In a later report he calls the rain event 'unbelievable'. The Weather Network started broadcasting in September 1988, so perhaps it should be aware of the Harrow Storm in 1989.

The Weather Network's Kim MacDonald reports that Tecumseh received twice its average monthy rainfall in 15 hours on the October 1, 2016 broadcast - this reporting is another example of an 'anchoring bias' - comparing a rainfall statistic to another statistic that is irrelevant to drainage design - no drainage systems are designed for monthly totals, instead they are designed based on annual extreme time series and derived extreme value statistics to project rare conditions that may have not even occurred yet. See our post on heuristic biases in rainfall reporting.

Big picture questions for Essex Region could include whether the 100 year regional storm design standard is big enough for the region. Other conservation authorities regulate to larger storms - Upper Thames uses the 250 year storm - most others use Hurricane Hazel, which is perhaps a 500 year storm. Other regions use large historical storms like the Timmins Storm. Perhaps it is time for the "Windsor Storm" based on the September 2016 storm. 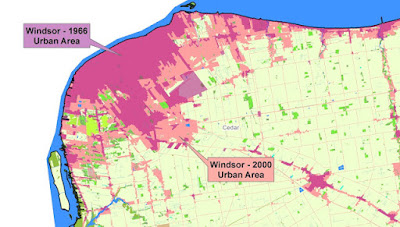 Another question - are local flood hazard limits keeping up with hydrologic changes to the region over decades? We explore this for many Ontario cities here - but here is a map of the growth from the 1960's to late 1990's. Pink areas are expanded urban area.

Consider this: when your design standard is so low (Essex Region has the minimum 100-year flood standard in Ontario according to the Provincial Policy Statement on natural hazards), the importance of expanded development and intensification in existing development areas is an even more important factor when considering increased runoff and flood risk. Why? Because pervious land uses can absorb some fraction of 'small' 100 year storm but not much of the large storms used in other regions. Those using Hurricane Hazel design storms which saturate the ground with anecedent moisture conditions (US Soil Conservation Service AMC III conditions to be exact) do not have as significant an increase in runoff following development. Those using 100 year storm, like Essex Region, use the drier AMC II conditions in hydrologic models, meaning that the soil-vegetation surface can absorb relatively more ... until it is paved over.

Environment Canada corrects CBC story that storms are getting worse in the Windsor Region over decades.

Up until now Windsor Airport had decreasing extreme rainfall trends like most of southern Ontario, according to Engineering Climate Datasets. As summary is below. Here are more details. 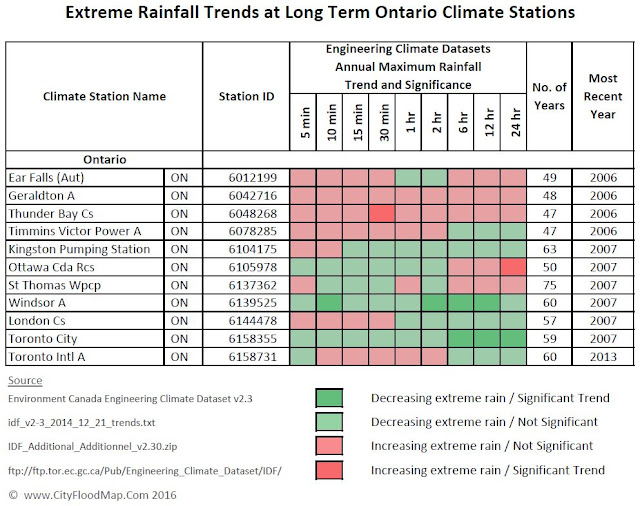 Below are the underlying Windsor Airport trend graphs up to 2007 from Environment Canada (the highlighted durations of 10 minutes, 2 hours, 6 hours and 12 hours are the statistically significant decreasing trends ins annual observed maximum values - these correspond to the dark green cells in the table above): 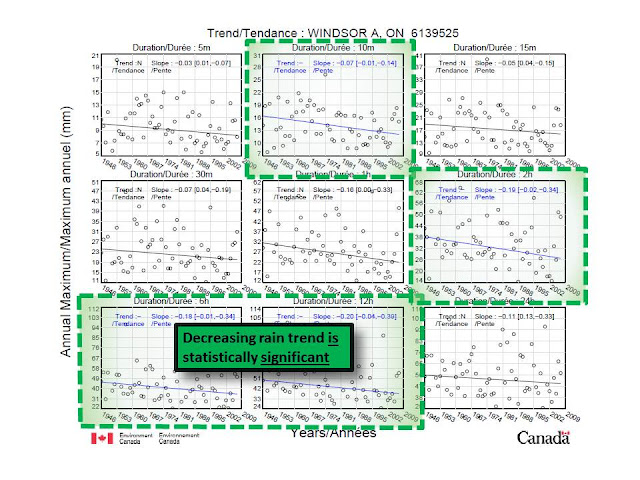 It will be interesting to see if companies offering sewer back-up insurance or overland flood insurance will pay for all claims related to this storm. Runoff rates obviously exceeded the drainage system capacity in many areas, meaning flood damages were due to surface water entering properties, which is excluded from most homeowner policies. Surface water flood damage endorsements are available from Aviva, Intact and RSA. Following recent extreme events, these companies have tried to clarify coverage exclusions to homeowners, encouraging them to sign up for overland, surface water flood coverage. It is unclear how state of emergency / disaster relief funding would offset insured and uninsured damage claims.