Does this stranded GO Train in the Don River valley look familiar?:

Back when you were rocking to Queen/Bowie Under Pressure for the first time, Metrolinx was getting to know the flood risks for the Richmond Hill line that started in the late 1970's. These rain line flood risks were documented in the flood inquiry report for Premier Davis.

Fast forward to May 28-29, 2013 and there was a bigger flood in the same place. But it happened at night so no trains, no issue.

Fast forward a bit more to July 8, 2013 and we get this: another stranded GO Train in the same place. Exactly the same place? Wow!

Hello McFly! It's Back to the Future. Too bad GO Trains do not fly away like modified DeLorians do.

Metrolinx had to explain the 2013 incident as an unprecedented event. In fact, it was not unprecendented flooding, or rainfall, but unprecedented judgement to not monitor flood levels at the Todmonden river gauge beside the tracks. A sensor has been in place since 1962 and real time sensors were in place online for years (e.g., TRCA Todmorden gauge).

Under pressure no doubt to explain how known safety risks could be ignored for its workers and passengers, Metrolinx would take a page from Milli Vanilli and 'Blame it on the Rain".

Climate change, or extreme rainfall, is a  quick and easy scapegoat for everything that has gone wrong in flood risk management or municipal drainage design over the past 50 to 100 years. But it does not explain incidents that should be managed as well-known operational risks. So 2013 was a big year for 'Blurred Lines", both for Robin Thicke and also for evidence-based, data-driven reporting on flood risk factors.

Today there is widespread misreporting that water level sensors were installed on the Don River after the flash flood of 2013. Perhaps extra sensors have been installed? The truth is that they have been in place for a long time.

If we are going to have effective solutions to flood risk mitigation, we have to accurate in characterization of flood causes, whether it was deficient Keating Channel dredging in the early 1980's or operational decisions in 2013. Otherwise we will "Blame it on the Rain" like Milli Vanilli and concoct misguided solutions to problems that do not exist. Solutions that could be worse than useless and miss real effective opportunities for risk mitigation.

PS - the maximum short term rainfall intensity recorded at the long term climate station / rain gauge in downtown Toronto was in 1962 (22.4 mm over 5 minutes). It caused widespread flooding even when the city was not a fully developed or intensified as it is now. Flooding blocked roads and in my neighbourhood there were hundreds of flooded basements as well: 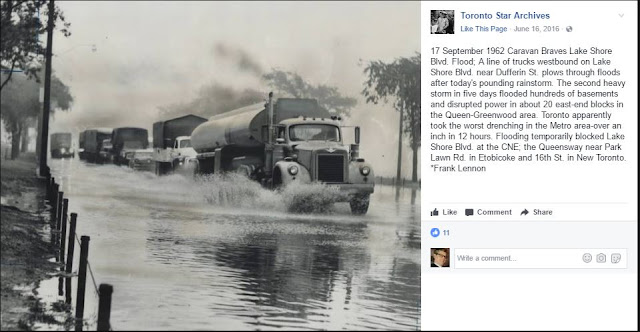 So there is not really a new normal for rainfall and flooding, just more of yesterday's extremes, accentuated with 24-hour cable news, 24-7 weather reporting, and cell phone videos to capture every popped manhole, soggy underpass, or puddle that occurs in a big storm.
Posted by Flood Advisor