***
Some records are made to be broken, whether its the Leaf's Stanley Cup drought or Lake Ontario flooding. At right are the Leaf logos over the years. See the top right logo they had in 1952? And see the current bottom right logo? Old is new again with the logo, right? Same thing with maximum water levels in Lake Ontario.

Below are historical average and maximum Lake Ontario water levels from the Departments of Fisheries and Oceans and Environment and Climate Change:


This is from the April 2017 bulletin available here at this link. The historical average, maximum, and minimum monthly values are shown in the table below (see full table here).

On May 28, 2017 the Lake Ontario Level is 1.69 metres above the reference datum elevation of 74.2 metres, meaning an actual water elevation of 74.2 + 1.69 = 75.79 metres above sea level. Hourly levels can be graphed or tabluated from this site. The graph below shows lake levels generally leveling off and rising slightly in the last weeks of May 2017 (y-axis is the depth above the datum):


Relative to maximum historical values, the May 28, 2017 depth of 75.69 is 4 centimetres above the previous 1973 May monthly maximum of 75.65, and 4 cm below the previous June monthly maximum of 75.73 m. And 75.69 is just 7 centimetres above the 1952 May average. We visited the Outer Harbour Marina yesterday and levels have flooded the fixed perimeter dock / walkway so that temporary paths to the boat slips have been made - so yes, levels are above average and many fixed shore features have been built for the averages and not the maximum levels.

The current Lake Ontario levels are causing a higher erosion potential further inland with waves nearly undermining the boardwalk near Woodbine Beach as shown in this picture:


Gabion baskets (metal wire cages filled with stone), and armour stone (large boulders), are protecting the boardwalk in the Beaches from encroaching lake levels. Further west at Woodbine Beach "Puddlegeddon" is raging on, interfering with volleyball plans although the puddles are subsiding.

While you could say water levels are high for volley ballers who have been playing in the Woodbine Beach league for almost 20 years, the levels are only 4 centimetres above the previous May maximum. So it is not unexpected that in a 100 year monitoring record, you exceed an earlier maximum every so often. That is what statistically is supposed to happen with observations of natural systems. Today's Lake Ontario levels are not significantly above the maximum values 65 years ago in 1952 or 44 years ago in 1973.

***
Need up to date Lake Ontario levels 24-7? You can call these numbers to get the current reading, and the maximum and minimum in the past 12 hours. That will include any short term effects from wind set-up (seiches) that tilt the lake higher on one side than another cool. Here are the numbers:

Remember to add 74.2 metres to he number Max Headroom tells you on the phone. He's no Siri or Alexa but you can get the level in English or French.

***
You want more Great Lake real time water level information like the ones above? Call these numbers:

The Canadian Hydrographic Service operates a network of announcing gauges at its stations on the Great Lakes and St. Lawrence River. The following stations can be accessed by telephone at the number listed:

The May water level bulletin in out at this link. It shows we finally broke the record for maximum recorded Lake Ontario water level for May (see chart below). As of May 10 there was no record breaking - as noted in the Environment and Climate Change Canada LEVELnews:

"By the end of April, Lake Ontario had risen to levels that haven’t been seen since 1993, and reached near record levels in the first week of May. By May 10 the daily average Lake Ontario water level was 75.80 m, only 2 cm below the highest level ever recorded (1918–2016) at the beginning of June 1952."

Near Woodbine Beach in Toronto's Beaches neighbourhood, the shore erosion has caused the boardwalk to now be fenced-off. Beyond the armour stone, gabion basket and rip rap revetement that has protected some portions of the boardwalk, the shore has washed away and the boardwalk is undermined, suspended and sagging, hence the barriers: 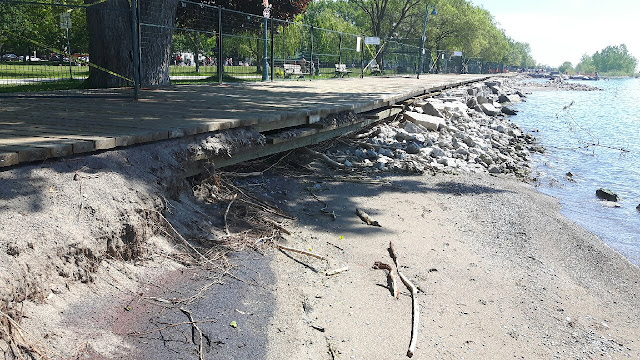 It makes you wonder what is more effective and reliable, the grey infrastructure in the distance (conventional Armour Stone, gabion baskets (not visible below the surface stones), "rip rap" limestone, or the softer treatment of green infrastructure soil and roots in the foreground that has all washed away due to the force of high water and waves. Basically, the boardwalk damage happened beyond where the conventional grey infrastructure ended, where the green infrastructure failed. This experience suggests that old-fashioned grey infrastructure is more reliable and effective at erosion protection than softer revetment. Certainly the green part of the shore was robust for low lake levels and erosion forces, but not strong enough for above average conditions like we see in Spring 2017 on Lake Ontario.

The erosion damage restoration (two layers of armour stone) has been installed along the boardwalk and will provide future erosion protection ... because water level records are made to be broken. 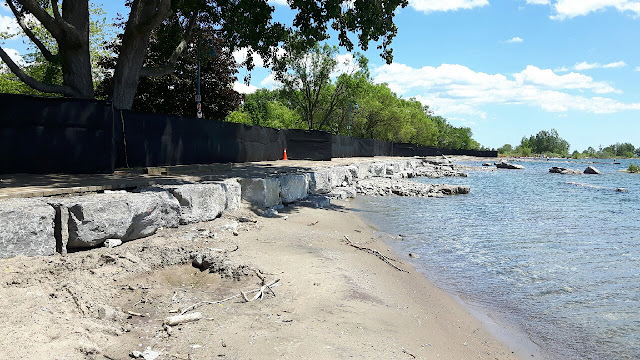 And further west Woodbine Beach has been drying up, and volleyball has returned to larger areas (in the background) now that Lake Ontario water levels are returning to their normal lower elevations. But there is still some evidence of spring 2017 Puddlegeddon. 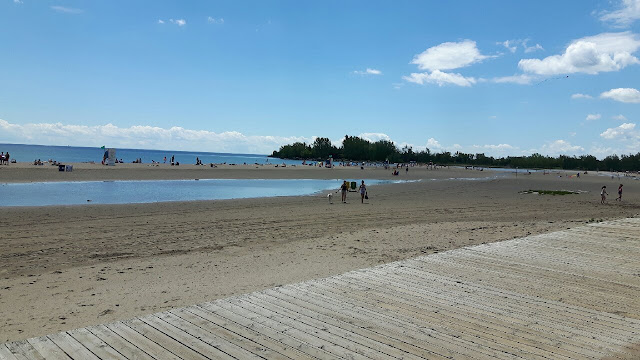