There are many sensational media stories about ghost storms and ninja storms hitting urban areas, and a steady claim that we are experiencing more extreme rainfall, that is, higher intensities for a given probability (called return period), or greater frequency of given design intensities. Often it is stated that we are experiencing more 100 year storms today and that is a "new normal" brought on by a changing climate.

How does the number of climate stations, or rain gauges, that are in operation affect the number of observed extreme events. Well, let's look at Toronto for example.  Several past extreme events were reported in the Staff Report on Impact of July 8, 2013 storm on the City's Sewer and Stormwater Systems dated September 6, 2016: (https://www.toronto.ca/legdocs/mmis/2013/pw/bgrd/backgroundfile-61363.pdf)

During the May 12, 2000 extreme rainfall event, Toronto operated 16 rain gauges as shown on the staff report map below. 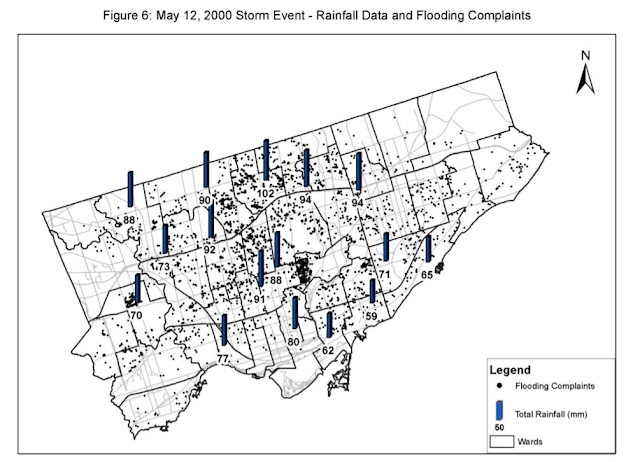 Fifteen years later, during the August 19, 2005 storm, the City operated 31 rain gauges as shown below, so almost double the number of rain gauges.  Look at the higher density of gauges in north Toronto where many higher August 19, 2005 rainfall depths were observed. 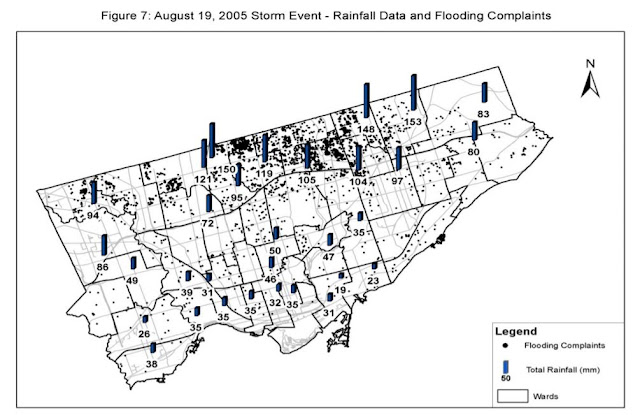 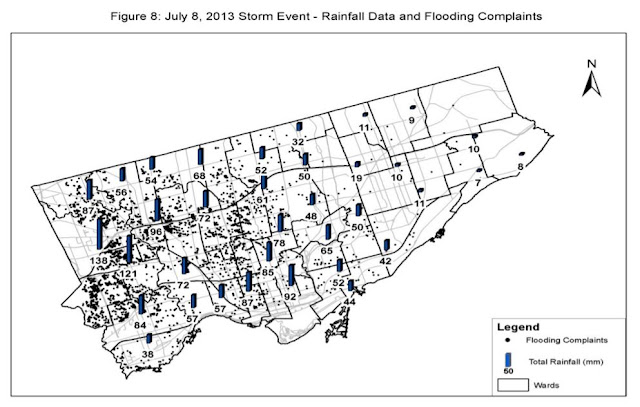 And then a few years later, on August 7, 2018, the city operated 43 rain gauges - even more than 2013. I don't have a map but here is a super-cool graph summarizing Toronto Open Data rainfall totals at those gauges over a period of 5 minutes to 24 hours.

And now today as of July 17, 2019, Toronto has 45 active rain gauges as shown in the following map presented to the Ministry of Environment Conservation and Parks' stormwater stakeholder group participating in development of minimum standards for ECA pre-approval. 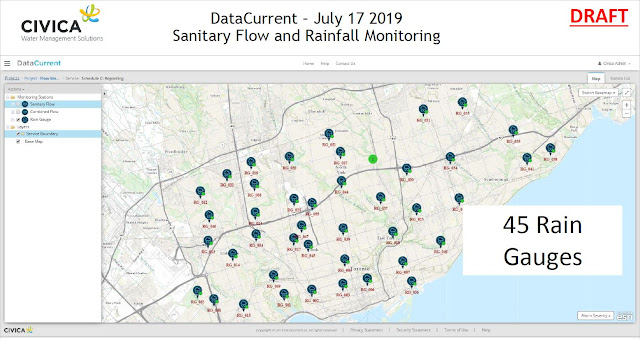 So let us summarize the trend in the number of rain gauges in the chart below. 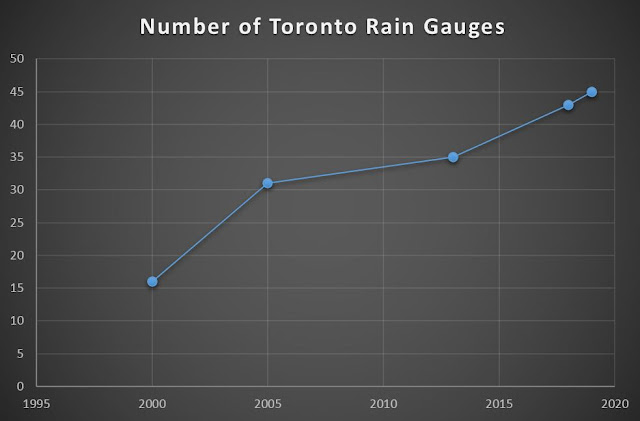 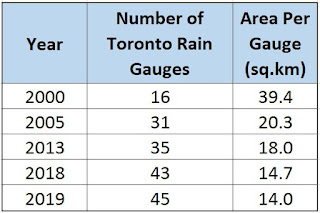 So what is happening at fixed locations where rain intensities are measured? In Toronto and Mississauga, many trends are downward according to the Engineering Climate Datasets: 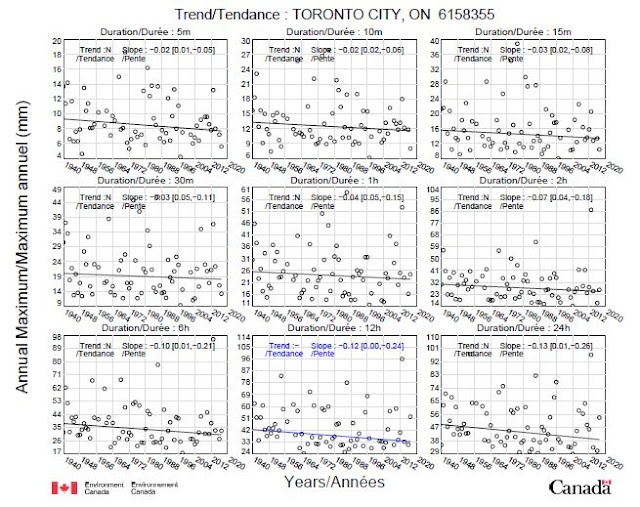 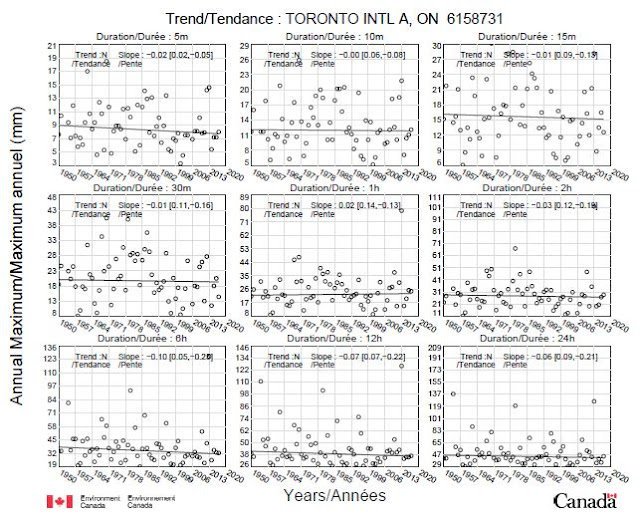 As a result, design intensities for short durations have been decreasing since 1990: 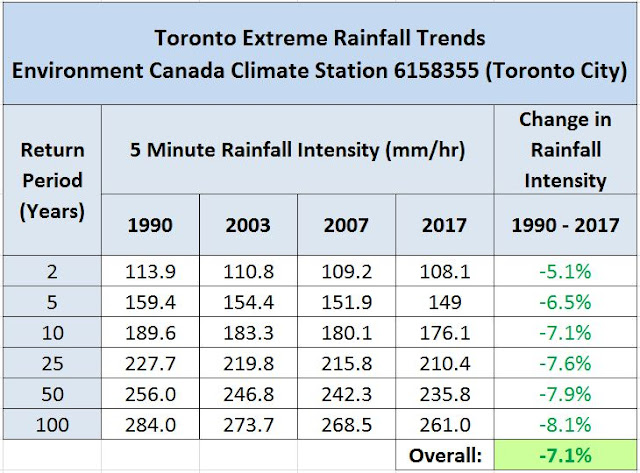 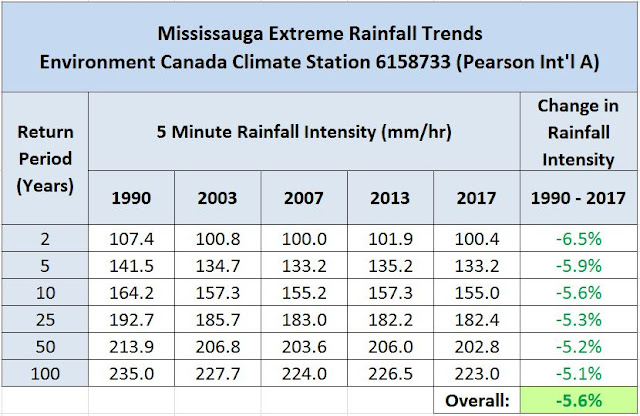 We have a "finer mesh net" to catch these events and add them to our records - we have almost 3 times more rain gauges in Toronto since 2000.

But no. Storm are not becoming more intense. If we see more of them, it is because we are looking harder for them with more extensive monitoring efforts. Given this expanding intensive network of rain gauges today, it is not uncommon, statistically speaking, to observe many 100-year storms over a short time period.  This earlier post explores those statistics in the GTA - https://www.cityfloodmap.com/2019/03/are-six-100-year-storms-across-gta-rare.html.
Posted by Flood Advisor