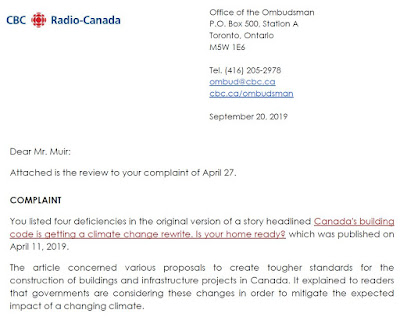 The CBC Ombudsman has found violations in the CBC’s Journalistic Standards and Practices related to an April 11, 2019 article entitled "Canada's building code is getting a climate change rewrite. Is your home ready?" (link).

The violations relate to publishing the wrong value for flood damages resulting from a Toronto August 2018 storm, and failing to note corrections to an article.

The CBC has always been very responsive to feedback on extreme weather reporting, including on the frequency of extreme events.  In January 2019, the Ombudsman also found violations related to reporting of more frequent extreme rainfall events (i.e., 100-year storms) - corrections to a couple stories were required.  Those Ombudsman's findings are noted in a previous post.  Other CBC story corrections have been made since 2015, again relating to storm frequency and the causes of flooding, and are noted in this previous post.

While the complaint surrounding the April 11, 2019 article is related to a single storm, the Ombudsman noted that there is a broader issue stating:

"I have a broader concern that there is a pattern of imprecision in CBC’s coverage relating to flood events."

This comment is based on the fact that the cited average flooded basement claim or payout was $43,000 was really based on an extreme 2013 flood event in Toronto - not an average at all - yet it has been repeated over and over by the media including CBC.

A previous post shows how this value started (as $40,000 back in 2017) and how it has been expanded to cover the whole country.  It has been used in Intact Centre on Climate Adaptation's infographics as well:

Intact Financial Corporation's website refers to the $43,000 value too: 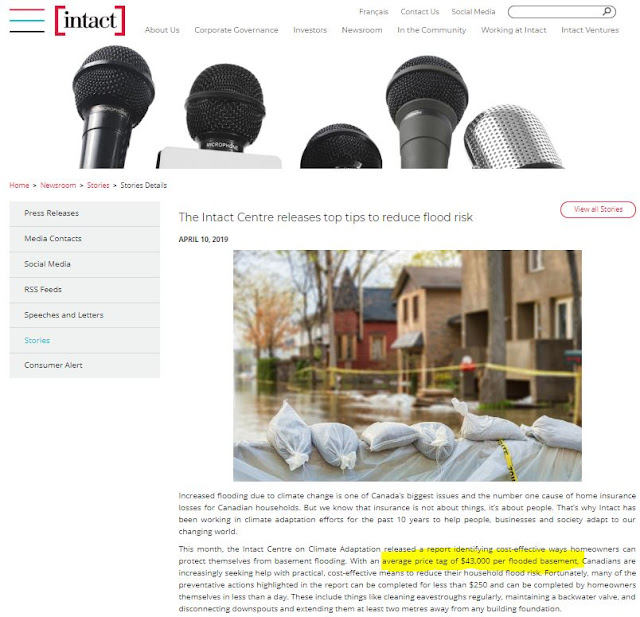 Global News. The Globe and Mail. Canadian Underwriter. TVO's The Agenda. All repeat the incorrect $43,000 value. Only CBC has been keen enough to entertain a review and make corrections to the record.

The full review is noted below for reference 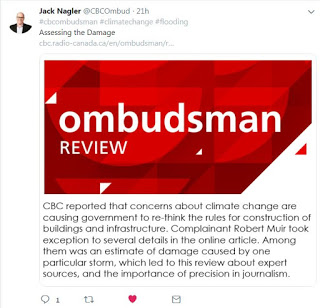 CBC reported that concerns about climate change are causing government to re-think the rules for construction of buildings and infrastructure. Complainant Robert Muir took exception to several details in the online article. Among them was an estimate of damage caused by one particular storm, which led to this review about expert sources, and the importance of precision in journalism.

You listed four deficiencies in the original version of a story headlined Canada's building code is getting a climate change rewrite. Is your home ready? which was published on April 11, 2019.
The article concerned various proposals to create tougher standards for the construction of buildings and infrastructure projects in Canada. It explained to readers that governments are considering these changes in order to mitigate the expected impact of a changing climate.
Two of your points prompted CBC News to make amendments to the article. One concerned wording that implied that predicted changes in extreme rainfall events had already been demonstrated. The other concerned the use of incorrect terminology to describe a backwater valve. Many homeowners will recognize this device which can decrease the risk of a sewage backup in their home.
Your third point suggested the article should have more fully addressed the cost effectiveness of the various proposals.  In response, CBC News explained that this was outside of the scope of this particular article.
You were satisfied that those three points were properly addressed. However, on your fourth point, you requested a review. The remaining dispute relates to a section of the article which included an interview with Natalia Moudrak, Director of Climate Resilience at the University of Waterloo's Intact Centre. At one point she discussed the amount of damage caused to homes by flooding in Toronto.
Here is the relevant excerpt of the article:
While architects and construction workers grapple with reducing emissions from large buildings, average Canadians will face other problems.
"Flooding is the biggest challenge" linked to climate change for most homeowners, said Natalia Moudrak, director of climate resilience at the University of Waterloo's Intact Centre.
And there are measures homeowners can take now to safe address flooding.
If a homeowner has a pump to get water out of a basement, "it's important to install a backup generator," she said. Widespread flooding often leads to power outages, leaving regular pumps useless when they're most needed.
Homeowners can also take simple steps to elevate valuables, like expensive electronics, off their basement floor or put items in plastic or steel containers in case water does creep in, Moudrak said.
To prevent sewage from flowing into your home during a flood, David Foster, a spokesperson for the Canadian Home Builders' Association, recommends installing a backwater valve, a mechanical backflow prevention device linked to the plumbing and designed to allow water from sewer drains to only flow away from the home.
"There is not a lot of cost involved in that, it just involves changing the way things are done," said Foster, who has consulted with the government on the new code.
When constructing a new home, installing a backwater valve costs roughly $400, Moudrak said. When retrofitting an existing home, it usually costs about $3,000. But municipalities often offer subsidies to help offset that expense.
The problem, she said, is most people don't know about them.
Only six per cent of Toronto homeowners took advantage of the city's flood resilience subsidy program, she said. When floods hit the city last year, she said the average cost to affected homeowners was $43,000.
The sentence at the heart of your complaint is the very final one. You wrote that the $43,000 figure was “misstated”. It reflected the Intact Centre’s Toronto 2013 Flood Report, not the 2018 one (i.e. - the article states “last year”). You also suspected that the calculations of the estimate are based on studies done in the United States by the National Flood Insurance Program.
You said more accurate numbers could be obtained from the CatIQ database, which you describe as “the definitive source for compiled flood damages from Canada’s insurance companies.” Based on the number of claims and total value of payouts from the 2018 storm, you suggested that a more accurate number was $18,509 rather than $43,000. You wrote:
I believe that it is important to clarify given the fact that urban flooding is a significant issue, the costs of risk reduction are immense, and sound economic data and analysis is required to make evidence-based decisions on damage reduction management strategies. Flood damage data is a key piece of this economic data and many municipalities have cited the $43,000 value in federal infrastructure grant applications, which may not reflect actual damages, and could therefore adversely affect how scarce resources are allocated to address an important infrastructure challenge.

Paul Hambleton, the Director of Journalistic Standards and Practices, responded on behalf of CBC News:
To be clear, the story quoted Natalia Moudrak, director of climate resilience at the University of Waterloo’s Intact Centre on Climate Adaptation: “When floods hit [Toronto] last year, she said the average cost to affected home owners was $43,000”. That information is also included in “Weathering the Storm: Developing a Canadian Standard for Flood-Resilience in Existing Communities”, a report published in January and co-authored by Ms. Moudrak.
In a footnote, the report attributes that estimate to the Insurance Bureau of Canada (IBC) “based on Toronto flooding in 2013”. However, you wrote, the actual source is FEMA’s National Flood Insurance Program (NFIP) cited in a July, 2012 story in Forbes. The story cites the interactive “Cost of Flooding” found on the NFIP page as estimating nearly $40,000 damage to a 2,000 sq. ft. home after a 6-inch flood.
It’s interesting to note that in looking at it now, almost seven years later, “Cost of Flooding” estimates damage of a little over $20,000 for a 1,000 sq. ft. home and about $52,000 to a 2,500 sq. ft. one-storey home. (There was no estimate for 2,000 sq. ft. home).
It’s pretty clear that there is a range of estimates and, it seems, little public information about how those numbers were reached. But you have touched on an interesting issue here.
On one level, while reporters can tell us what they see and hear, there are many things that they don’t witness or can’t know. In those instances they attribute the information. That way, readers know the source and can make their own judgment about its reliability. In this instance, we attributed the information to Ms. Moudrak, identifying her position and the organization she works for.