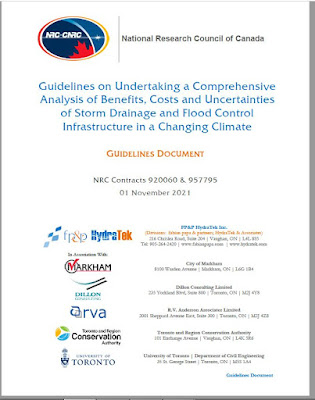 The National Research Council of Canada (NRC) has released the National Guidelines on Undertaking a Comprehensive Analysis of Benefits, Costs and Uncertainties of Storm Drainage and Flood Control Infrastructure in a Changing Climate.

The NRC Guidelines identify two approaches for assessing flood damages for projects of various scale and detail including:

i) a bottom-up approach based on property-scale losses, and

ii) a top-down approach based on scalable national or regional insurance loss data.

Previously unavailable data was shared by several organizations including Munich Re, the Insurance Bureau of Canada, and CatIQ to support the analyses in the guidelines. Thank you!

Catastrophe Indices and Quantification Inc. (CatIQ) is a Toronto-based subsidiary of Zurich-based PERILS A.G. that delivers detailed analytical and meteorological information on Canadian natural and man-made catastrophes. Established in 2014, CatIQ and is supported by the majority of the Canadian insurance and reinsurance industry, allowing it to provide the most reliable source of catastrophe loss information in Canada. Data are available through CatIQ’s online subscription-based platform that includes comprehensive insured loss and exposure data used by the insurance industry and other stakeholders - we used this database to analyze regional and national flood and related water losses across Canada.

As noted in the NRC Guidelines "Nationally, the average loss, representing closed claims is approximately $22,300 based on well over 70,000 claims – this average value is for 55 events. Due to many smaller events in the database, the median loss is lower than the average at $16,300". The following chart shows the distribution of losses across these 55 events (see Appendix D | Direct & Indirect Long Time Horizon Damages, Figure 8): 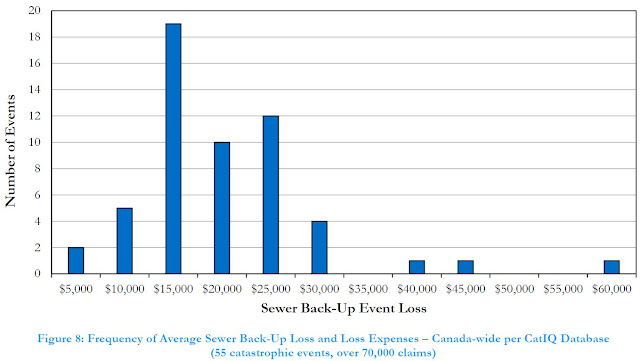 Given that CatIQ defines events and compiles loss data for those events with over $25M in losses, some small events with smaller losses. A review of CatIQ indicated that events with a higher number of claims, corresponding to more extreme and widespread events, reported higher average claims.

Intact Financial has recently noted that the often-cited average cost of $43,000 represents an upper limit for certain flood events (Intact Financial, 2019) - that makes sense for an extreme event, as reported in the NRC Guidelines:

"...an extreme event average claim approaching $40,000 could be appropriate. Specifically, the June 2013 Alberta flood event characterized by extensive riverine flooding had an average claim of over $37,000 for nearly 8000 sewer back-up/water claims."

The one instance of an event with average claims of up to $60,000 per policy represented only a handful of claims. Note that some have mistakenly cited the above $43,000 value as the average cost of a flooded basement across Canada, which is not supported by available data. It could be more reflective of overall losses in some regions, including both insured and uninsured losses.

For another example, refer to the NRC Guidelines authors 2020 WEAO fall webinar paper that illustrates how regional sewer-back-up losses can be used to derive EAD values for project areas. That example applies where the number of flooded basements is available through detailed, local modelling. See post with paper:   https://www.cityfloodmap.com/2021/12/national-guideline-development-for.html.

More examples? Infrastructure Canada's Disaster Mitigation Adaptation Fund (DMAF) requires an assessment of Return on Investment (ROI) for candidate projects, specifying a minimum ratio of benefits to costs of 2:1. Local sewer back-up flood damages may be used to better define the potential benefits of infrastructure investments that reduce losses, following the approach in the WEAO fall webinar paper above. Depending on the level of service for a flood damage reduction project, a significant portion of expected damages many be avoided, and counted as benefits in a DMAF ROI calculation.

Munich Re gratefully drilled down into previously-available North American loss data presented in its NatCatSERVICE and provided historical Canadian insured losses for hydrological and meteorological events, and estimated uninsured losses. 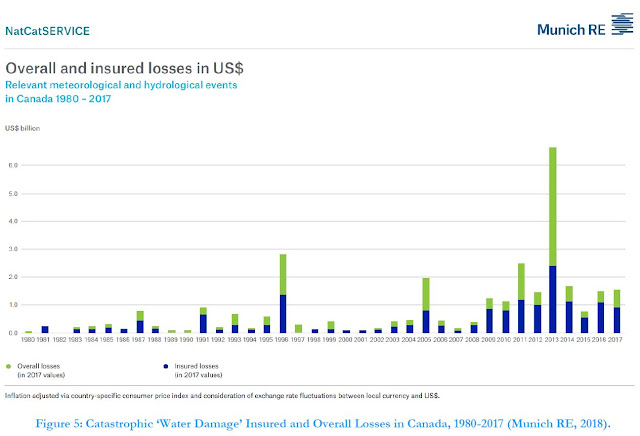 Munich Re data were then analyzed to derive return-period and Expected Annual Damages (EAD) across Canada. The analysis revealed 'average' 2-year losses of $426M and rare 100-year losses of $2.29B. The EAD was $697M for insured losses (the blue bars in the figure above), showing that expected losses that factor in occasional extreme losses is higher than the average.

Obviously such flood losses are significant and need to be managed. Expected annual insured losses of $695M represent about 0.4% of the Canadian GDP of $1.6T.

Overall losses that include uninsured losses are higher and are represented by the green bars in the chart above. Munich Re estimates this as described in NatCatSERVICE documentation and considers insurance market penetration and reported disaster assistance payouts. The following chart shows the relation between overall and insured losses (ratio of green to blue bars above)(see (see Appendix D | Direct & Indirect Long Time Horizon Damages, Figure 7): 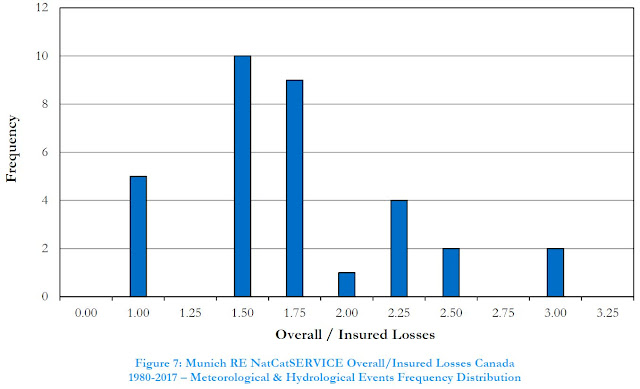 The overall losses in an individual year could be 3 times the insured losses. On average from 1983 to 2017, overall losses were 1.94 times insured losses. Why is there variability? Well, different types of hazards in Canada have different levels of insurance coverage. Sewer back-up has a relatively high degree of coverage and in years dominated by severe urban flooding events (e.g., Toronto and GTA in 2005) there would be relatively lower uninsured losses. In contrast, riverine flood insurance is was previously not available for residential properties in Canada until about 2015, and may not be available for high risk non-residential properties in floodplains - so in 2013, Calgary riverine flooding would not have been insurable (although many companies may still have granted claims in that instance as a 'goodwill measure' as noted by KPMG in 2014).

How can Munich RE loss data be used to assess benefits of adaptation to flooding and inform funding policies? The overall losses can guide us as to how much we should invest to reduce these damages.

The NRC Guidelines include case studies that apply Munich RE loss data including (see Appendix I | Case Studies):

Case Study 1 conclusions note broadly how insurance loss information may be used: "This case study demonstrates that high-level policy decisions may be sufficiently informed through available information sources for future benefits (using insurance industry data to guide the estimation of avoided future losses), and the setting of target economic performance (using a benefit-cost ratio approach or some other relevant measure of return on investment) to establish, in this case, appropriate funding levels for allocation."

In the Case Study 1 example analysis, based on a i) Munich RE overall (insured and uninsured) EAD value of $1.347B (2017 dollars) for water damage (hydrological and meteorological events), and ii) CatIQ EAD of $819 million (2018 dollars) for insured flood loss and loss expense, a representative EAD of $1.0B was considered. This values was used to estimate an annual funding allocation noting:

"Accordingly, based on the parameters assumed in this analysis relating to the estimation of benefits, time value of money and acceptable benefit-cost ratio (return on investment), a national flood protection policy could allocate about $2.8 billion annually (in 2020 dollars) for a 10-year period on projects that would achieve the technical performance objectives sought."

Case Study 2 conclusions note how insurance loss data was applied at a municipal and project-scale assessment of damages and benefits: "This case study demonstrates the downscaling of broad-scale insurance industry loss data to more granular levels for application to a municipality-level program and further down to the level of a collection of projects within the municipality. This “top down” approach to estimating future benefits (avoided losses) negates the need for highly detailed “bottom-up” methods for urban drainage system damage and benefit estimation when such approaches might be impractical or require excessive efforts relative to the accuracy they might produce. That is, estimation of urban drainage system damages on a bottom-up (property scale) basis, considering minor and major storm system risk, wastewater system risk, system interactions, and property-scale grading and construction factors has not been shown to be feasible or correlated to reported damages."

Munich RE loss data was used in Case Study 2, based on the City of Markham, Ontario to determine the following expected annual damages (and potential benefits of infrastructure investments):

The scaling of national Munich RE loss data and EAD considered proportion of population in Case Study 2. Regional loss data from IBC or CatIQ, excluding uninsured losses, could similarly be scaled. A review of proportion of GDP, as part of DMAF ROI assessments in Markham, indicated a similar proportion to population. The NRC Guidelines illustrate how several economic, demographic, built-form and infrastructure parameters are closely correlated across regions of Canada, and are related to regional expected losses. This is the basis of top-down loss scaling considered where bottom-up property scale analysis is impractical.

The following tables summarize the benefits (based on scaled Munich RE losses), costs (see a future post on costing data), and achieved benefit-cost ratios at a municipal, broad study area, and at a sub-project scale.