Evidence-based policies require strong communication to support education and data sharing to build a better understanding of issues. Here are some connections between government agencies and insurance industry players who have a role in flood management : 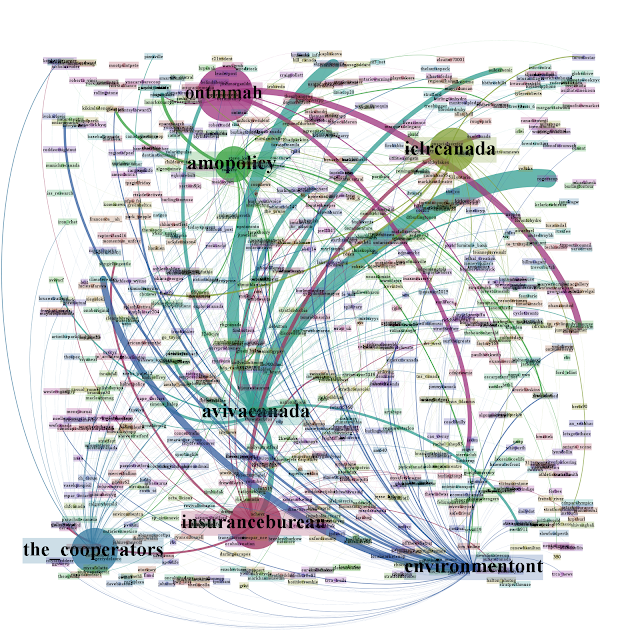 Can you find Environment Canada in the twitter network above to find out who is following whom? Unfortunately Environment Canada (@environmentca), the federal agency that collects and analyzes extreme rainfall data that shows storm intensities are not increasing, is not prominent in communications.  They do not effectively communicate rain data trends like this:

Who is more prominent in terms of communication on flooding? The Ontario Ministry of the Environment and Climate Change is (@environmentont), but unfortunately they only provide the following infographics on weather and climate, which is not helpful in any way to understanding flood issues:

The insurance industry is prominent in terms of communication on flooding and rainfall extremes, for example @insurancebureau, @iclrcanada, @avivacanada, or @the_cooperators. Unfortunately, Insurance Bureau of Canada's publications through the Institute for Catastrophic Loss Reduction substitute theoretical speculation on climate for actual data on historical extreme weather: 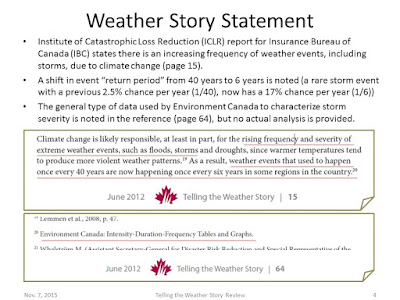 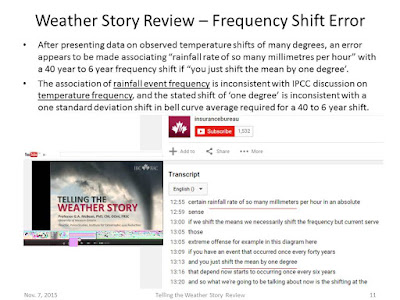 A full review of the insurance industry's promotion of incorrect data is in our previous post.

Unfortunately, in this age of Twitter, 140 characters are not enough to explain science, facts, evidence, details, engineering principles, analysis, etc. in any meaningful way and so society is often left uninformed and misled.

Evidence-based policies that must be built on substance and not infographics and mathematical conjecture.

The Ontario Government's is off track and has somehow linked flood damages to climate change, when in fact Environment Canada data shows no increase in storm intensities.

In a CBC report the Minister of the Environment and Climate Change says "Governments, too, are also getting hit. Murray said severe weather events have cost the government hundreds of millions." 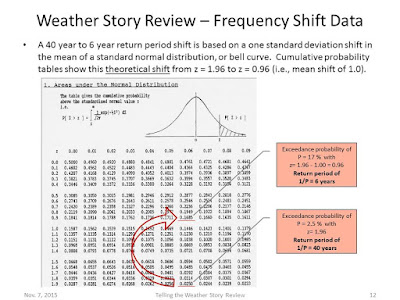 Yes damages are increasing but storm frequency is not, so why mention weather events in the roll out of the government's climate change policy at all?  Flood damages are not caused by temperatures increases due to climate change. And extreme weather is different than long term climate.  Dear Minister, will you not respond to my letter?

Oh well, this post is longer than 140 characters so I have lost many of you by now and you have been distracted by some Google ad for drones .. no, wait, that was me.