"Only the small secrets need to be protected. The big ones are kept secret by public incredulity."(attributed to Marshall McLuhan)

Could it be that we have ignored the obvious "secret"? That is, the effect of increased urbanization on urban flood risk in Ontario. It seems so.

Mapping of urbanization patterns in that Greater Toronto, Golden Horseshoe, and the Big K-W areas shows obvious, dramatic increases in watershed urbanization over a thirty year period from 1966 to the late 1990's. In some Toronto watersheds, urbanization increased by 986%, and that does not even consider intensification within previously developed areas. This analysis begs the question: "Why is there such a disproportionate focus on global climate change impacts to local extreme weather (now disproved) to explain flooding, compared to a focus on the obvious land use changes on hydrology, and increased runoff under historical climate conditions?"

The following map shows the increase in urbanization from 1966 according GIS mapping converted and shared by Ducks Unlimited (source is the Canada Land Inventory Land Use 1:50,000 scale mapping for Southern Ontario), and to 1999-2002 per the SOLRIS Version 1.2 land cover GIS mapping, as compiled in the Ontario Land Cover Compilation Version 2.0 and available through Land Information Ontario. 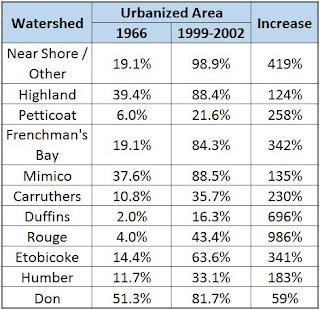 Clearly, the amount of urbanization has increased dramatically in southern Ontario watersheds, including many that have experienced flooding in the past decades. In about 30 years, urbanization has increased by 986% over and above the 1966 amounts in the Rouge River Watershed, and by 696% in the Duffins Creek Watershed. In Toronto area watersheds, unlike Rouge and Duffins, the increase is also dramatic - not as much for the percentage increase, but for the relative coverage. The Highland Creek Watershed increased by an added 124% over the 1966 coverage, resulting in over 88% urbanization coverage. Similarly, Mimico Creek Watershed urban areas expanded by 135% more, also resulting in over 88% urbanization by 1999-2002. The following table shows the TRCA watershed breakdown.

How about Mississauga where there was flooding in 2013? Well, Etobicoke Creek Watershed added 341% urban coverage resulting in 64% coverage by 1999-2002. Yes it should seem greater, but we have not counted the valley areas or other large open or vegetated areas within the urban areas (e.g., hydro corridors, etc.). We have also subtracted these 'greenspaces' from the 1966 data to avoid over-reporting the 1966 coverage, as the 1:50,000 source data was not as detailed as the the SOLRIS data that classified land used down to a 15 m cell resolution. And the Cooksville Creek area in Mississauga? In 1966 urban development extended generally up to Dundas Street, while 30 years later it extended to Highway 407 as shown in the image below.

While stormwater management controls have been put into place for some later developments to mitigate hydrologic impacts, these are finite, perhaps up to 100 year storm standards - extreme weather events can be above or below that threshold, meaning flood damages can occur for the large events. Furthermore, many infrastructure components put in place decades ago are not sized to handle 100 year storms, and have been designed to overtop for high frequency, lower return period events (e.g., underpasses, local roadway crossings).

So why have folks jumped on the now-discredited conclusion that climate change has been driving local flood damages and losses, but ignored basic hydrology and effects of urbanization? Perhaps we can learn from Vit Klemes, perhaps our greatest hydrologist. He had reiterated his piece to the Canadian Water Resources Association (Implications of possible climate change for water management and development. Water News (CWRA), 11, 1, S2-S3) in his address to the International Interdisciplinary Conference on Predictions for Hydrology, Ecology, and Water Resources Management: Using Data and Models to Benefit Society,15–18 September 2008, Prague, Czech Republic. In this address, entitled "Political Pressures in Water Resources Management. Do They Influence Predictions?",  he states:

"[the theorists] find it easier to play trivial scenario-generating computer games while the [managers] find these games much easier to finance... And so by happy collusion of interests, an impression is created that 'something is being done for the future' while the real problems are quietly allowed to grow through neglect of the present"

***
NB - the newer urban areas have higher densities and greater runoff potential than the older ones:


And intensification within established urban areas can increase runoff potential as well. This shows changes since the early 1970's across the 7 lots beside my house in east Toronto:


And this shows intensification in York Region in an area developed in the early 1950's but undergoing redevelopment / intensification, expanding impervious area coverage, to this day: 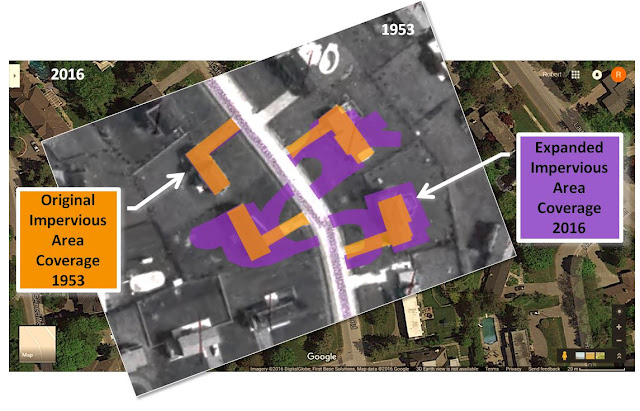