The University of Waterloo civil and environmental engineering department analyzed design rainfall intensity trends - that is intensity-duration-frequency (IDF) statistics used in infrastructure design - with the goal of potentially updating City of Kitchener and City of Waterloo design rainfall values. Why do this? Because climate change is predicted in some models to increase the intensity and frequency of extreme rainfall. Results are in the following report:

Update of Intensity-Duration-Frequency (IDF) Curves for the City of Waterloo and the City of Kitchener Prepared By: Donald H. Burn, Ph.D., P.Eng. Department of Civil and Environmental Engineering University of Waterloo, August 2012.

The executive summary states there is no significant change and some decreasing trends for short duration rain intensities - that is, the design parameters that affect urban infrastructure flood risks:

The University of Waterloo findings are consistent with the 'general lack of detectable trend signal' in past rainfall observations as reported by Environment and Climate Change Canada (ECCC). ECCC reported even some regional decreasing trends (St. Lawrence region of southern Quebec and the Atlantic Provinces) for the short duration intensities affecting urban drainage systems:

What do the University of Waterloo findings look like? These intensity-duration curves for 5-year, 25-year and 100-year rain frequencies show that for duration less than 2 hours, the storm severity has been decreasing: 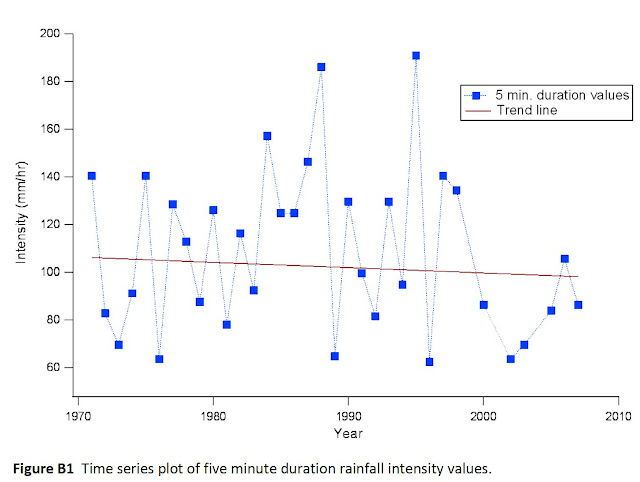 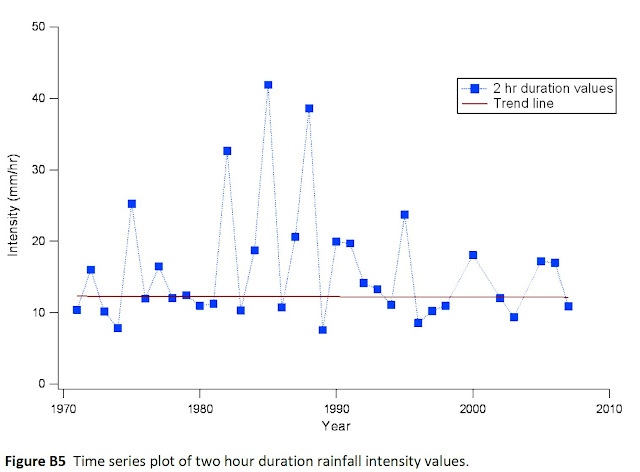 Prime Minister Justin Trudeau recently stated "We are a government grounded in science". If so, why has he stated that 100 year storms may occur every 10 years or sooner following 2017 flooding in Gatineau? There is no data to support the storm frequency statement made by the Prime Minister.

The insurance industry, interested in flood damages and the effect on business activities, has stated that storms that happened every 40 years are now occurring every 6 years. Environment and Climate Change Canada has clearly refuted this frequency shift, most recently in Canadian Underwriter saying its studies do not support the insurance industry statement. As noted in the recent article:

The following detailed review of insurance industry statement and comparison with Environment and Climate Change Canada's Engineering Climate Datasets clearly shows how the insurance industry has confused projected rainfall intensity shifts with trends from past observations: