There is considerable uncertainty in modern infrastructure design methods when rainfall design intensities are well established using past observations and derived return period values. The uncertainties include:

Considering future climate scenarios, the input IDF is also uncertain. Estimated future values often depend on the assumed Representative Concentration Pathway (RCP) which are called 2.6, 4.5, 6.0 and 8.5 and which represent progressively more extreme emissions, CO2 concentrations, and energy entering the troposphere (the number 2.6 represents the energy per area warming the planet you could say).

Future design IDF estimation tools like the University of Western IDF_CC Tool give a choice of 3 pathways - 2.6, 4.5 and 8.5. The description of RCP 8.5 indicates that this scenario gives the most severe climate change impacts as noted below. But the extreme intensities do not always support that statement. 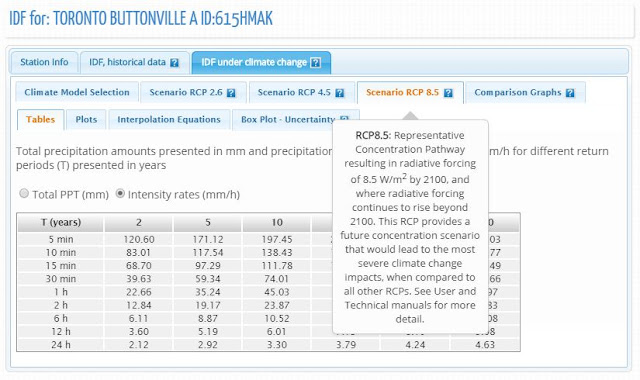 The following future IDF intensity tables for RCP2.6, RCP4.5 and RCP8.5 show that the RCP4.5 scenario can give the highest short duration intensities that affect infrastructure capacity and resilience. The 5-year 5-minute intensity is highest for RCP8.5 but only 3.5% above RCP4.5, which is very small in the context of infrastructure design. But the 100-year 5-minute intensity for RCP8.5 is below the RCP4.5 values by over 8% - and the 24-hour intensity is also about 8% lower. So RCP8.5 is not the most conservative, 'most severe' scenario for extreme 100-year events. Note these tables are based on a period of 2050-2100. 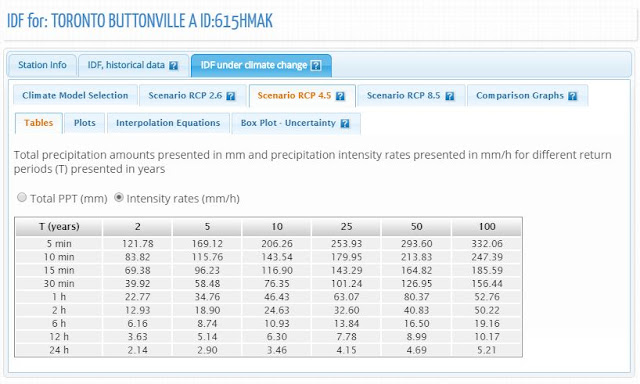 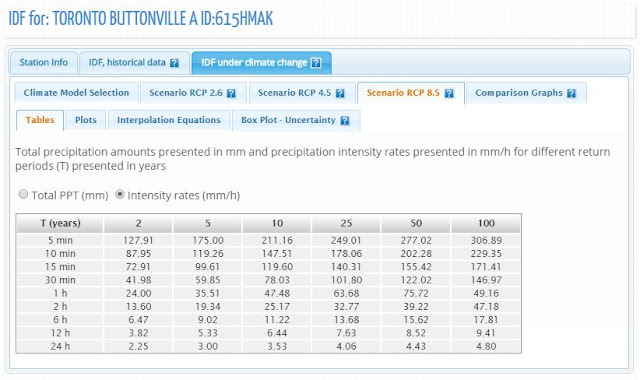 The reasonableness of the RCP8.5 has been questioned. In Energy, University of British Columbia note “RCP8.5 no longer offers a trajectory of 21st-century climate change with physically relevant information for continued emphasis in scientific studies or policy assessments.” Researchers add:

"This paper finds climate change scenarios anticipate a transition toward coal because of systematic errors in fossil production outlooks based on total geologic assessments like the LBE model. Such blind spots have distorted uncertainty ranges for long-run primary energy since the 1970s and continue to influence the levels of future climate change selected for the SSP-RCP scenario framework. Accounting for this bias indicates RCP8.5 and other ‘business-as-usual scenarios’ consistent with high CO2 forcing from vast future coal combustion are exceptionally unlikely. Therefore, SSP5-RCP8.5 should not be a priority for future scientific research or a benchmark for policy studies."

Because there is such as wide range of future IDF possibilities already, it is good to know that RCP8.5 could be discounted as implausible in sensitivity analysis. The chart below shows various projections for 5-minute 100-year rainfall intensity for a range of RCP scenarios. Dropping RCP8.5 from further consideration will help focus assessments of infrastructure resiliency. But considering RCP4.5 may yield even higher IDF values than the assumed 'most severe' RCP8.5 scenario.


RCP2.6 scenarios may not result in future IDF intensities that are above current design standard values as shown in the chart above.
Posted by Flood Advisor