"For Canada as a whole, there is a lack of observational evidence of changes in daily and short-duration extreme precipitation." 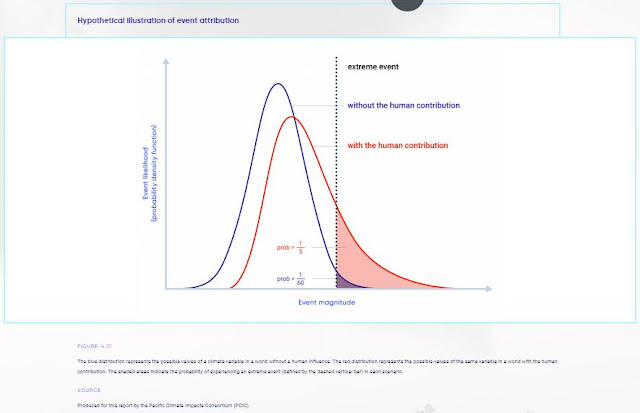 Engineering Climate Datasets in some regions show trends in the magnitude of rain intensity magnitudes (reality) going the other way however:
https://www.cityfloodmap.com/2019/03/idf-updates-for-southern-ontario-show.html .

This image shows the difference between the theory and the local data reality - the green line is the REALITY showing for any given frequency (2, 10, 50, 100 Year events) the magnitude is going down in southern Ontario: 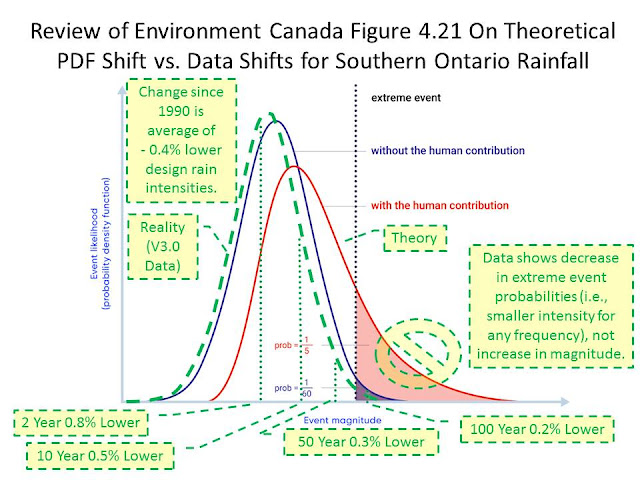 ECCC suggests there is insufficient data to observe the changes in extremes expected: "Estimating changes in short-duration extreme precipitation at a point location is complex because of the lack of observations in many places and the discontinuous nature of precipitation at small scales." - while that MAY be accurate for extreme events that are rare and elusive, why do 2 Year rain intensities, derived from many, many yearly observations at all long term rain gauges, show the clearest decline, across all durations from 5 minutes to 24 hours?

Surely, we have DO enough point locations and observations to see the change in these small storms. But if these small frequent storm intensities are no higher with today's temperature shifts, why do we expect the extremes to be higher either? Data we do have shows in southern Ontario these 100 year intensities are 0.2% LOWER on average. So extremes are shifting shifting along with the means.... shifting lower.

A theoretical probability density function shift has been promoted in the past by ICLR and IBC in the 2012 Telling the Weather Story report: 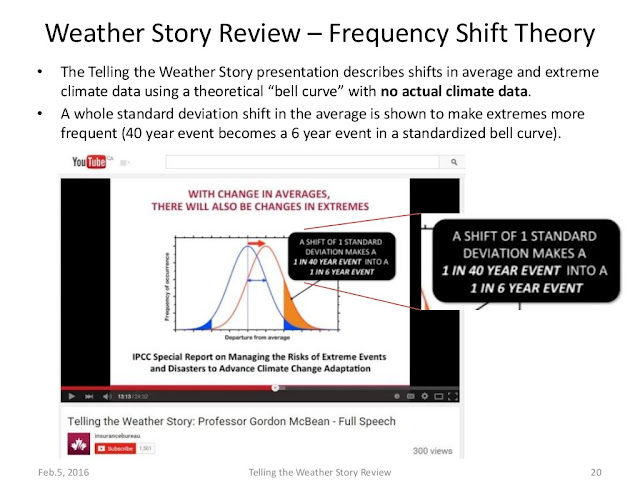 This has been shown to be 'made-up' and not related to real data (ECCC IDF tables and charts mistakenly cited as the source of the 40 year to 6 year frequency shift) - this chart shows the theoretical 1 standard deviation shift widely circulated by IBC and real data shifts: 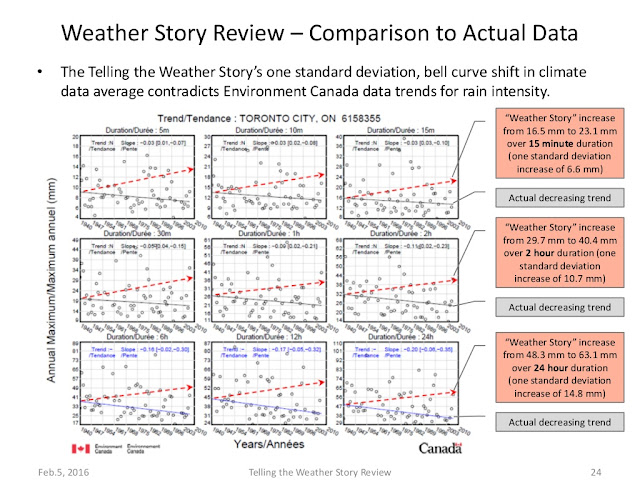 See the difference between theory and data? It is pretty clear. 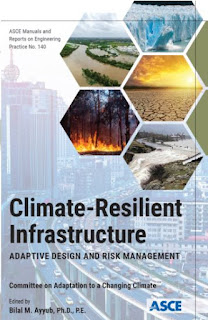 Given the lack of past trends, and uncertainty in future noted in the ECCC report ("It is likely that extreme precipitation will increase in Canada in the future, although the magnitude of the increase is much more uncertain"), we must follow the American Society of Civil Engineer's recommended "Observational Method" approach see 2015 report Adapting Infrastructure and Civil Engineering Practice to a Changing Climate at http://theicnet.org/wp-content/uploads/2015/07/2015-07-ASCE-Practice-to-Climate-Change-2015.pdf, and also see https://ascelibrary.org/doi/book/10.1061/9780784415191?utm_campaign=PUB-20181023-COPRI%20Alert&utm_medium=email&utm_source=Eloqua# for the new 2018 manual on engineering practice Climate-Resilient Infrastructure, Adaptive Design and Risk Management.

The ASCE 2018 manual promotes incorporating any no-regret, now cost measures in design today considering most probable future conditions, and allowing design flexibility to adapt in the future if and when performance is shown to be inadequate or affected by future changes - this is a practical approach intended to avoid costly over-design, and over-investment in potentially unnecessary and cost-ineffective infrastructure today.

While the ASCE 2015 report notes the high degree of uncertainty "However, even though the scientific community agrees that climate is changing, there is significant uncertainty about the location, timing and magnitude of the changes over the lifetime of infrastructure."

In contrast, the ECCC report appears to asset a high degree of confidence in future changes saying "For Canada as a whole, there is a lack of observational evidence of changes in daily and short-duration extreme precipitation. This is not unexpected, as extreme precipitation response to anthropogenic climate change during the historical period would have been small relative to its natural variability, and as such, difficult to detect. However, in the future, daily extreme precipitation is projected to increase (high confidence). - how can ECCC assert high confidence when there are no observed trends? How can ECCC contradict ASCE's statement on high "signifcant uncertainty'?

ECCC reports that summer precipitation is expected to decrease: "Summer precipitation is projected to decrease over southern Canada under a high emission scenario toward the end of the 21st century, but only small changes are projected under a low emission scenario." - how can that be if the summer temperatures are going up? Does this not violate the Clausius-Clapeyron theory cited in the ECCC report states that "increased atmospheric water vapour in this part of the world should translate into more precipitation, according to our understanding of physical processes" - so that is a theory - what about the real data? What does it show? the Clausius-Clapeyron relationship does not stand up to scrutiny as shown in a previous post.

Given highest rainfall extreme are in the summer (see the work of Dr. Trevor Dickinson on seasonal extremes), a summer decrease in precipitation could potentially mean lower flood risks. The data for southern Ontario already show a decrease in the annual maximum series (reflecting lower means and typical 2 Year design intensities in derived IDF curves) and the extreme 100 Year design intensities are decreasing slightly as well.

Overall, many in the media have over-hyped concerns about changing rainfall severity. Data and ECCC's report shows there has been no change, beyond random fluctuation. Looking ahead the American Society of Civil Engineers indicates that future changes have "significant uncertainty"- this contracts the ECCC's statement on "high confidence" on future extremes.
Posted by Flood Advisor