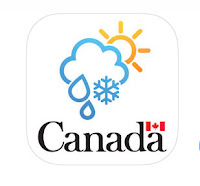 Some climate station IDF analysis have been due for an update for several years.  The new version 3.10 update in 2020 extends analysis to 2016-2017 in many cases.  The trends in short duration intensities can show how flood risks are changing due to changing climate and any more severe weather. Many municipalities and researchers have updated their IDF statistics internally and have reported trends in extreme rainfall intensities (see previous post for Ontario studies: https://www.cityfloodmap.com/2020/05/annual-maximum-rainfall-trends-in.html). 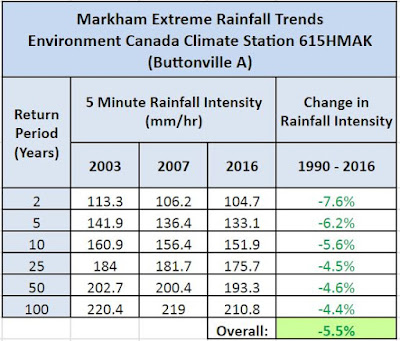 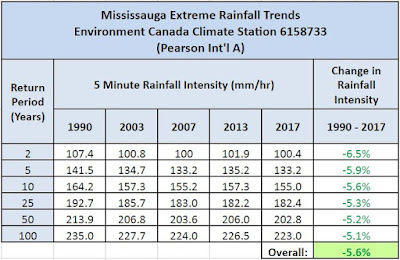 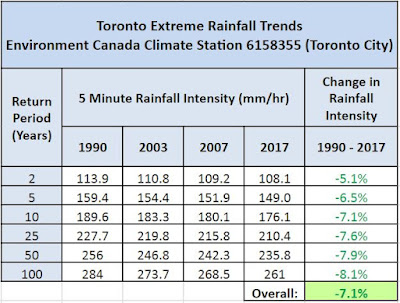 There is higher uncertainty with 100-year storm intensities due the rarity and spatial distribution of events.  However, the more frequent 2-year intensities that rely on many more rainfall observations every year to characterize these average annual peaks are more reliable.  To illustrate this, consider the 95% confidence bands on the Environment Canada IDF 5-minute data for Buttonville Airport, in southern York Region, just north of Toronto:
The 100-year 95% confidence band of 97 mm/hr (2 x 48.5) is 46% of the expected value of 210.8 mm/hr.  In contrast, the 2-year band of 22.6 mm/hr is only 22% of the expected value of 104.7 mm/hr, a relatively tighter band.  The tight band makes the observed decrease in 2-year rain intensities more noteworthy, i.e., the 2-year intensity has decreased 7.6% which is a significant proportion of the uncertainty band.

The longer duration annual maximum rainfall series for Toronto and Mississauga have relatively tighter confidence bands for both 100-year and 2-year intensities:


Given that rainfall intensities are decreasing over most durations in the Greater Toronto Area, based on Environment Canada's annual maximum series and derived 2-year and 100-year IDF design intensities, why does media often report a 'new normal' of more extreme weather?  This may be due to lack of familiarity with data and a tendency to exercise an 'availability bias', i.e., simple listing of recent events that have caused damages and association of those events with increasing rainfall intensities, but without checking the actual rainfall trends or investigating other factors.  For more on cognitive biases in framing and solving complex problems read about Thinking Fast and Slow on Floods and Flow:   https://www.chijournal.org/C449.   Given the proliferation of rainfall gauges across the GTA, many more than the Environment Canada numbers, the observation of many extreme events over a short duration may not be a statistical anomaly at all, as analysis here shows: https://www.cityfloodmap.com/2019/03/are-six-100-year-storms-across-gta-rare.html

The CBC has made several corrections to its stories on changing extreme rainfall trends in the past, sometimes finding violation of its Journalistic Standards and Practices regarding accuracy of reporting - here are some examples: https://www.cityfloodmap.com/2019/06/cbc-correcting-claims-on-extreme.html.  Most recently the CBC Ombudsman in a review entitled "Past, Present, or Future" wrote that "journalists could have been clearer with their choice of tenses" - more on that here:
https://www.cityfloodmap.com/2020/05/past-present-or-future-cbc-ombudsman.html.

The CBC Ombudsman stated "There are appropriate distinctions made between observed phenomena and predicted phenomena" in its reporting noting this excerpt:
The last two bullet points are careful to use the future tense.

The recently updated Environment Canada IDF data in the GTA supports the CBC's perspective that intensified weather extremes are predicted phenomena as opposed to observed ones.