What COVID-19 Taught Us About Observed Data vs. Model Projections: They Are Different - Let's Remember That When Interpreting Climate Models

"All models are wrong, some are useful".  Predicting COVID-19 conditions has taught us that models come with a great deal of uncertainty, and are based on a lot of assumptions.  Furthermore, models have to be constantly updated over time with real observed baseline data to represent the starting point for future predictions. At least we recognize the difference between theoretical model projections and the past observations on COVID-19 conditions.  More attention should be given to the difference between theoretical models of climate effects and observed changes in extreme weather. 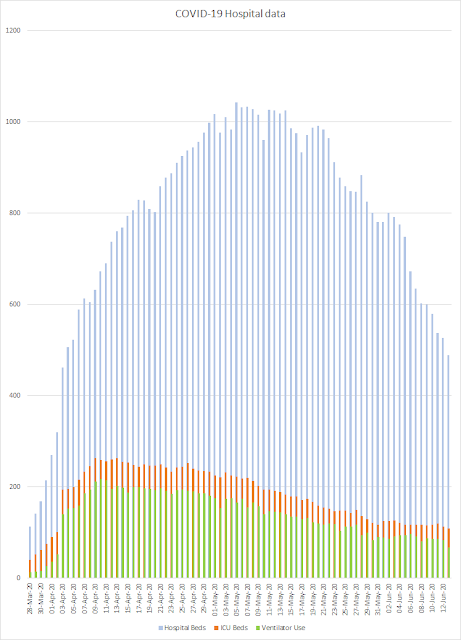 In early April, COVID-19 ICU cases were projected to increase to 1200 in a best case to about 1500 in a worst case in Ontario, increasing considerably from actual data counts in late March.  The chart at right shows that ICU beds peaked at under 300 cases by mid April, a fraction of the best case model prediction, and has declined since.  So model projections should be viewed with some caution, and the reliability of the projections should be questioned and validated where possible with real data.

Predicting future weather extremes due to climate change effects has a great deal of uncertainty as well.  The recurrence time of extreme rainfall is predicted to decrease due to climate change effects, meaning that the "return period" of storms would become smaller.  For example, a rainfall event that had a return period of 35 years today (meaning a probability of occurring in any year of 1/35, or 1 in 35) has been predicted to occur every 12 years in the future (i.e., a higher probability of happening each year of 1/12 or 1 in 12 ... that a greater chance than today's 1/35).  That is what is projected to occur in Canada from now to 2100.

The above example on decreasing recurrence times is from a simulation presented in Canada's Changing Climate Report by Environment Canada (link: https://changingclimate.ca/CCCR2019/).  It is for a future scenario with several assumptions about growth and emissions called the RCP8.5 scenario, representing a Representative Concentration Pathway of just one of several future scenarios.  The shift in 24-hour precipitation recurrence times are presented on Figure 4.20 b shown below:

Some have misinterpreted the theoretical, simulation model changes from past to present as 'actual' observed changes in extreme precipitation when in fact the Environment Canada report clearly notes these are 'projected changes' and are 'simulated by Earth system models' for the scenario RCP8.5.  A different scenario's simulated results, with different assumed emissions and growth, and different recurrence time shifts are presented in Figure 4.20 a) as well.

CBC's In Our Backyard interactive notes "Climate change is no longer theoretical. It’s in our backyard" - unfortunately it presents theoretical past model trends as real changes that are "In Our Backyard" now.  Here is the online report link: https://www.cbc.ca/news2/interactives/inourbackyard/

CBC News report: "Climate change is making extreme rainfall a more frequent occurrence. Storms that historically happened only once every 50 years are now coming every 35 years or less. By the end of the century, they could happen once every 12 years on average, according to a recent climate report from Environment Canada. All this increases the potential for urban flooding."

So while predicted changes are only theoretical, CBC News mistakenly reports that changes have already occurred and are 'now coming' at smaller recurrence intervals (i.e., higher frequency and higher probability each year).

The CBC Ombudsman has indicated that the CBC should be careful to distinguish between past, present and future extreme rainfall trends, as noted in a recent post: https://www.cityfloodmap.com/2020/05/past-present-or-future-cbc-ombudsman.html

A review of historical extreme rainfall trends in one region of Canada affected by may flooding events has shown no decrease in the recurrence time, or return period, of extreme precipitation.  A previous post showed that today's 35 year storms are actually occurring less frequently than in the past. In southern Ontario, long term climate station observations show that the average 25 to 50 year rainfall intensities today are actually slightly smaller than they were considering observations up to 1990. See previous post: https://www.cityfloodmap.com/2020/05/southern-ontario-extreme-rainfall.html


Here are the recently updated IDF values from Environment Canada considering data up to 2017:

Climate models that predict more frequent future rainfall intensities, characterized by shorter recurrence times (i.e., lower return periods = higher probabilities of occurrence) are not necessarily in step with observations (see Toronto airport example above and previous post on southern Ontario long term stations).  Here is a comparison of past trends in 100-year rainfall intensity based on observed data and projections from various studies - the actual data curve is already 'flat', so the need to flatten the curve can only be made based on projections and not past data.
Just like COVID-19 models have considerable uncertainty and must rely on observational data to calibrate and validate them - so they they are more reliable and useful in making projections of the future - climate models require checks on accuracy and usefulness.  Media like CBC News may not discern between model predictions and actual trend data which can mischaracterize trends in extreme weather.  Since models predicting extreme rainfall do not appear to match past observations over the recent past few decades, the accuracy and reliability to project conditions over the next 80 years should be closely scutinized.

While in the case of COVID-19, the need for "flattening the curve" is clear given the close scrutiny of observed data that has shown rising counts of infections, hospitalizations or deaths - that gives clear direction on actions to be taken to mitigate observed phenomena.  In the case of COVID-19, these values may even increase at an exponential rate.  In contrast, the IDF curve trends are largely flat if not already declining based on observed data in some regions.  Any change in extreme rainfall trends has been explained by natural variations (i.e., trends can go up).

There is a long-standing gap in the media mixing up predictions of extreme weather and actual Environment Canada observed data trends - sometimes a single report can start a narrative that can go unchecked for some time.  The "Telling the Weather Story" report is one such example where a theoretical shift in extreme weather has been reported, and repeated endlessly in the media as actual data when it is clearly not: