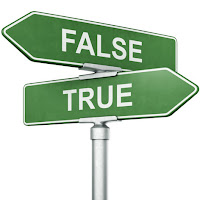 Rain intensity data in Canada show "lack of a detectable trend signal", despite recent statements by the Insurance Bureau of Canada ("Extreme weather events driven by climate change have increased in frequency and severity," said Don Forgeron, President and CEO, IBC, at a November 26, 2015 Economic Club of Canada event in Edmonton).

In this post we explain the rainfall intensity trend information available in Version 2.3 of Environment Canada's Engineering Climate Datasets, released in December 2014. That data is available here:

The "What's New" document describe "A new set of graphs that represents the historical trends of IDF properties has been produced for each station".  These trend graphs have been featured in many posts on the www.cityfloodmap.com blog. Could it be scientists in Canada are muzzled from getting these facts out as that do not support climate change mitigation policies (cap and trade, Bill 172)? If storms are no worse, why look at emissions to address flooding? 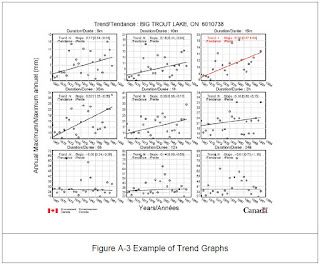 Trend graphs are included in release V2.30. The single station rainfall annual maximum series (AMS) were examined for any detectable trend, at a significant level 5%, for each of the durations examined. Figure A-3 is an example of such trend plots. The open circles in each plot represent the AMS rainfall amounts for the duration analyzed. These data are usually very scattered representing the variability of the climate. For most stations, the AMS does not feature any significant trends (Trend: N) but in some instances, an increasing (Trend: +) or decreasing (Trend: -) with time are noticeable. The slope with confidence levels are given in each duration plot.


So let's look at some trend indicators "+","-" and"N" for actual gauges.  The Toronto City gauge has decreasing rainfall intensity trends for all durations from 5 minutes to 24 hours.  The following mark-up shows that the 5 minute to 2 hour duration trends are flagged as "Trend :N", meaning not statistically significant. For longer durations, 6, 12 and 24 hours durations on the bottom three charts, the trends are flagged as "Trend :-", where the "-" means statistically significant. So some Toronto rainfall trends are decreasing to a large degree that is beyond the intrinsic variability expected in observed rainfall.
The noted Atmosphere-Ocean paper summarizes the Canadian extreme rainfall trend analysis in the abstract. Highlighted text below shows that there is no statistically significant trend overall in Canada, with the exception of parts of Newfoundland for durations of 1 - 2 hours:

Abstract
Short-duration (5 minutes to 24 hours) rainfall extremes are important for a number of purposes, including engineering infrastructure design, because they represent the different meteorological scales of extreme rainfall events. Both single location and regional analyses of the changes in short-duration extreme rainfall amounts across Canada, as observed by tipping bucket rain gauges from 1965 to 2005, are presented. The single station analysis shows a general lack of a detectable trend signal, at the 5% significance level, because of the large variability and the relatively short period of record of the extreme short-duration rainfall amounts. The single station 30-minute to 24-hour durations show that, on average, 4% of the total number of stations have statistically significant increasing amounts of rainfall, whereas 1.6% of the cases have significantly decreasing amounts.
However, regional spatial patterns are apparent in the single station trend results. Thus, for the same durations regional trends are presented by grouping the single station trend statistics across Canada. This regional trend analysis shows that at least two-thirds of the regions across Canada have increasing trends in extreme rainfall amounts, with up to 33% being significant (depending on location and duration). Both the southwest and the east (Newfoundland) coastal regions generally show significant increasing regional trends for 1- and 2-hour extreme rainfall durations. For the shortest durations of 5–15 minutes, the general overall regional trends in the extreme amounts are more variable, with increasing and decreasing trends occurring with similar frequency; however, there is no evidence of statistically significant decreasing regional trends in extreme rainfall amounts. The decreasing regional trends for the 5- to 15-minute duration amounts tend to be located in the St. Lawrence region of southern Quebec and in the Atlantic provinces. Additional analysis using criteria specified for traditional water management practice (e.g., Intensity-Duration-Frequency (IDF)) shows that fewer than 5.6% and 3.4% of the stations have significant increasing and decreasing trends, respectively, in extreme annual maximum single location observation amounts. This indicates that at most locations across Canada the traditional single station IDF assumption that historical extreme rainfall observations are stationary (in terms of the mean) over the period of record for an individual station is not violated. However, the trend information is still useful complementary information that can be considered for water management purposes, especially in terms of regional analysis.

The following chart by CityFloodMap.Com aggregates all the trend indicators in the version 2.3 dataset, counting combinations of trend slope and statistical significance as follows:

It is interesting to review the Pearson Airport gauge data trends given the record setting rainfall on July 8, 2013 that caused widespread urban flooding in Toronto. Even with the significant 2013 rainfall event, the 5 minute, 6 hour, 12 hour and 24 hour trends are negative, but not statistically significant, as indicated by the "Trend :N" flag. The 10 minute to 2 hour duration trends are positive but not statistically significant. 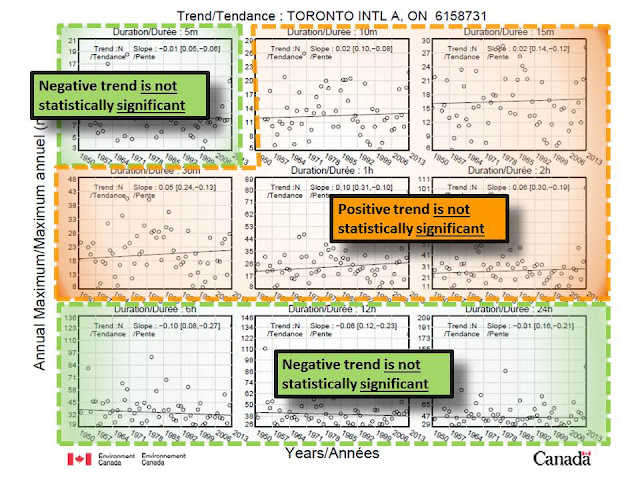 The confidence limits show that while there may be upward trends in the 15 minute extreme rainfall amounts - the slope is +0.02 mm/year - there is also a chance that the trend is downward by a significant amount (lower confidence band is  -0.12 mm/yr). This help illustrate why the positive trend is not statistically significant, as rainfall patterns are highly variable and minor trends can occur due to the random nature of observations.

Many factors affect flood risks and damages, and those related to runoff have increased over decades in many Canadian cities.  For example the Don River Watershed has increased in the amount of impervious, high-runoff cover from 15% in the 1950's to nearly 90% today and many overland flow paths, critical for conveying overland flow during extreme events, have been blocked or constrained.

In general, the Insurance Bureau of Canada has not relied upon data to make weather statements and has instead relied on theoretical statements, confusing projections with observations, and substituting temperature probability density functions with severe rainfall distributions:

Let's hope that IBC can improve knowledge of Environment Canada's Engineering Climate Datasets including the new trend analysis available - this is needed to better inform inaccurate statements on extreme rainfall trends and to focus instead on important flood risk factors. Cap and trade climate mitigation won't help reduce flooding because storms are not getting worse - so the government should focus on infrastructure upgrades in areas built before the 1980's (most cities), i.e., areas with lower levels of service in drainage design.

Here is a list of Ontario weather stations where the measured annual maximum 15 minute storm duration intensities are decreasing: 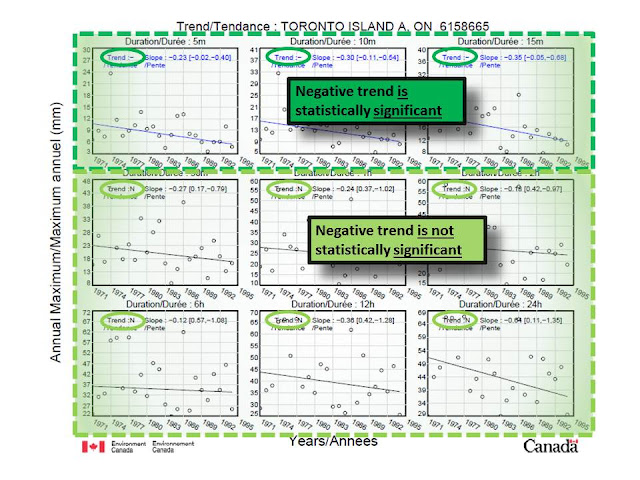 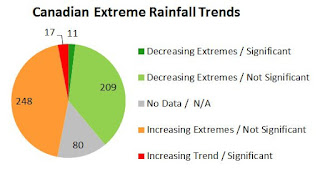