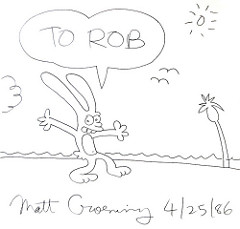 I had a favourite Matt Groening cartoon on my grad school cubicle cork board for years.  It was a Life is Hell black and white strip from Now Magazine.  In it Binky is lying in bed awake all night and Mrs. Binky asks him "What is keeping you up?" and Binky replies "Infotainment".

"...graphic visual representations of information, data or knowledge intended to present information quickly and clearly. They can improve cognition by utilizing graphics to enhance the human visual system’s ability to see patterns and trends."

Given how busy we are, infographics are wonderful - they can get us up to speed on complex issues in no time flat apparently, distilling a whole bunch of science, statistics and mumbo jumbo into a quick, easily digested glance-friendly format.

Here is the Climate Smart Infographic from RSA Insurance related to their new Waterproof Coverage insurance endorsement.  Hmmm "Protect Property in Extreme Weather", got it. "Weather Changing", sure. "20 more days of rain than in the 1950's", logical explanation for flooding .. uh....wait .. WAIT A MINUTE!  I was almost "Infografected".

What is an Infographection? Its like an infection, easily transitted through exposure to infographics. It affects the weak minded mostly, turning them into a zombie-like herd of followers.  Be afraid be very afraid, because for some reason infographection is becoming the preferred method of communication for insurance companies and provincial agencies.

What is wrong with RSA's infographic? Well, "days with rain" has no bearing on extreme weather or causes of the flooding RSA is selling endorsements for.  If days with rain was relevant, then Vancouver would flood all the time and nobody would get insurance there.  What is forgotten in the RSA "days with rain" statistic is the fact that a tiny amount of rainfall can trigger the counting of a rain day.  How little rain?  Fractions of a millimetre of rain - hardly the events that cause urban flooding.

Inoculate yourself against infographection - this paper explores some the of details we can consider when thinking about number of days with rain by first considering the tiny 'trace' amounts that are recorded:

As noted in the paper, operational changes have increased recording of rainfall events over time (not necessarily a fundamental increase in rainfall):

"The measurement of trace precipitation in Canada went through several phases over time. Not just the definition of trace precipitation (or the lack of definition) has been modified, but the measuring unit was also changed from imperial to metric system. All data in the Climate National Archive was converted from inches to millimetres with the introduction of metric system, which also caused further inconsistency in the data. Station relocations were often accompanied by new set of instruments and a new observer. The training given to the observers often resulted in a jump in the number of daily trace measurement."

Also, the switch to metric since the 1950's meant a smaller measurement unit, and meant its is now easier to record trace amounts and record a 'greater than trace' amount, i.e., a lawn mushroom-forming but not-flood-inducing "day with rain":

"The homogeneity of trace observation record was also seriously affected by switching from Imperial to the Metric system around 1977 - 1978. The units were given in inches before; the minimum measurable level has been decreased by almost 0.1 mm in the metric system. Table 1 gives a summary of the amounts and units used in both systems for rain and snow separately."

The unfortunate situation for RSA and flood risks in their portfolio is that by Blaming it on the Rain like Milli Vanilli would, RSA ignores real factors that have caused flows in increase (with no increase in rain intensity), and that have caused infrastructure flow capacity to decrease. Here are some ideas on causes of flooding and flood damage increases:

It seems RSA has been "infographected" by their own infographics.

*****************
If you got this far, you might also like this article in Psychology Today "Anti-intellectualism Is Killing America, Social dysfunction can be traced to the abandonment of reason".  It highlights "What Americans rarely acknowledge is that many of their social problems are rooted in the rejection of critical thinking or, conversely, the glorification of the emotional and irrational.".  Is this just Daniel Kahneman's lazy-brain System 1 thinking at work?
Posted by Flood Advisor