"The objective of Lost River Walks is to encourage understanding of the city as a part of nature rather than apart from it, and to appreciate and cherish our heritage. Lost River Walks aims to create an appreciation of the city’s intimate connection to its water systems by tracing the courses of forgotten streams, by learning about our natural and built heritage and by sharing this information with others."
Source http://www.lostrivers.ca/

According to Lost Rivers, Walmsley Brook was named for John Walmsley, a settler in the Leaside area or Toronto. It started as small streams near Duplex Avenue and Alexandra Boulevard which joined west of Yonge Street and flowed east to Mount Pleasant Road, then past Bayview and Eglinton, before heading south east to Laird Drive, the CPR rail line and the Don River.

Downstream reaches around McRae Drive to the outlet were largely open in 1922. The reach was subsequently filled in as shown on the images below.


The catchment draining to the low reach is over 400 hectares in area. That is significant as flood hazards were typically mapped when drainage areas reached 125 hectares, or approximately half a square mile. Today it is not uncommon to map river flood hazards for drainage areas as small as 50 hectares.

Given the large drainage area and the obstructions to flow along the overland flow path, it is no surprise that this are is subject to flood risks. But it does not manifest as river flooding - instead it is a combination of urban flooding overland, and basement flooding that is aggravated by extraneous inflows to the sanitary sewer system.

Over 250 flooded basements were reported after the May 12, 2000 storm in Toronto. The flooding was concentrated in the former Walmsley Brook watershed, and extended outside of it to the south west where the sanitary sewer system crossed into the watershed.
Detailed analysis using Ontario topographic data, geographic information system hydrology tools, and geo-referenced Toronto flood locations for May 12, 2000, August 19, 2095, and July 8, 2013 storms shows quantitatively that the overland flow path along lost rivers affects basement flood risk. A summary of the analysis is in a previous post.

Lost Rivers describes many other lost watercourse features in Toronto. We will highlight a few of them in the weeks to come, but first here is another smaller system that demonstrated flood clusters during extreme storm events, although not as extreme as Walmsley Brook in Leaside..

According to Lost Rivers, Yellow Creek originates in the Downsview area and entered the Don River just north of The Prince Edward. The Bathurst Heights reach experienced flood clusters on May 12, 2000, and also on July 8, 2013. Note that our mapping for all July 8, 2013 flood reports is incomplete and does not show all the reported flood locations as the individual site data is not available from the city. However our May 12, 2000 mapping does reflect all reported locations and this likely reflects the broader July 8, 2013 incidents as well - as most properties are built at grades and with service connection very close to their neighbours, back-ups at one property general reflect risks and incidents at adjacent ones. Sometimes property owners do not report flooding to the city and instead work through their insurance company. In the most chronically flooded locations where no back-up insurance is available, there may be no reports.

The image below shows where Yellow Creek fits into the broader lost rivers network and shows details of flooding along the Bathurst Heights reach. 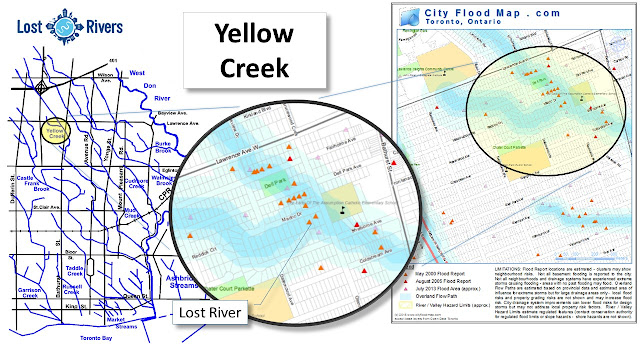