It's not just inconvenient its down-right annoying! Because Environment Canada data shows storms are not getting worse, we have to really think, think hard about why flood damages have been increasing in Canada. Scientists are muzzled from speaking about their research it seems.

"People are not accustomed to thinking hard, and are often content to trust a plausible judgment that comes to mind."
Daniel Kahneman, American Economic Review 93 (5) December 2003, p. 1450

OK. First let's explain Alberta 2013 flooding. Easy peasey lemon squeezey: they built stuff in the river flood plain, right in the floodway, and they built more and more and then the expected design floods arrived, in line with expected statistical probabilities, and so Calgary flooded. And High River flooded too. No surprise there. Done. QED. Next?

Let's use the scientific method to explain Toronto 2013 urban flooding outside of river flood plains. Why outside the flood plain? Because that is where over 95% of the flood damages occurred in 2013, 2005 and 2000 floods.

Hypothesis #1 - Storms are becoming more severe or occurring more often. That would be so easy to explain all the flooding, right? And the insurance industry said it was true, just like the advertisement for flood insurance to the right.

Experiment #1 - The insurance industry statement that weather events (and thunderstorms and extreme rain) that occurred every 40 years are now happening every six years has been thoroughly discredited as an inaccurate mistake based on theoretical speculation and no data. Some insurance companies have recently updated their advertisements to remove the statement. Environment Canada has advised the CBC on reporting inaccurate insurance industry statements that claimed more storms are happening now - CBC corrected their report. 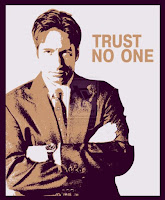 But don't take CBC's word for it - "Trust No One" as Mulder would say - do your own research. That's what CityFloodMap.Com did over the holiday break. We created a host of resources for you to explore extreme weather trends across Canada including interactive maps, summary tables, bar charts, pie charts ... whew!

This is a link to a post with all the resources. Spoiler alert. Only a few percentage of Canadian climate stations show any 'non-random' increase in recorded extreme rainfall intensity or frequency, despite the fact that temperatures have clearly increased.

You may want to believe that storms have become more severe because:

But back to Toronto flooding. We looked at the best rainfall records, screening out the less reliable short-duration monitoring periods and out-of-service climate stations. Here is what we have for rainfall trends in Ontario:

Southern Ontario has a lot of decreasing extreme rainfall trends, some are statistically significant, or strong, trends, including in Toronto and Windsor.  Ottawa Airport with 39 years of record had significant decreasing trends for short durations as well, but did not make the cut off.

Conclusion #1 - Are storms becoming more severe? Is that the cause of increased flooding? No. Environment Canada's official data does not support that hypothesis.

Hypothesis #2 - Toronto flooding is not explained by meteorology, but rather hydrology and increased runoff, and hydraulics and constrained flow capacity. 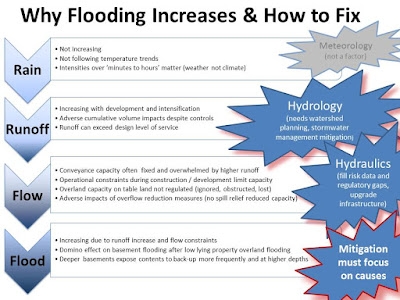 Experiment #2 - Back to 'thinking hard', or as Kahneman said in his book, 'thinking slow'.

First let's recognize that between rain and flooding there are several processes, runoff and flow. Many factors affect runoff volume and rate and more affect flow (i.e., the complex hydraulic capacity of sewer infrastructure and the overland flow system (lost rivers). The only Toronto homes that flooded directed due to rain did not have a roof. Homes flood when flow rates, driven by runoff, exceed the hydraulic capacity of conveyance systems, causing them to "back-up" and cause flooding.

We have proposed several causes of flooding to the Minister of the Environment and Climate Change in a letter this summer based on these processes. These included observations about hydrology and increased runoff, and the hydraulics of wastewater collection systems including documented flood impacts in the Municipal Class Environmental Assessment study in my neighbourhood, and observations about overland flood hazard regulation, including correlation with observed basement flood density. Getting a response was slow - we just received a thank you email that did not address the questions on extreme rain trends, and instead doubled down on the emissions strategy as the means to address flooding.

Conclusion #2 - The Truth is "Out There". So is the Ontario government. It does not want to consider the inconvenient truth that extreme rainfall is not increasing in Ontario, and so it has misdirected policy solutions to flooding.  We've always said there are good reasons to be concerned about global warming. But mitigating flood risks is not one of them, despite predictions of more extreme rainfall - as Yogi Berra said "It's tough to make predictions, especially about the future."

Even if storms become worse in the future, the fact that flood damages have already increased in Canada but extreme weather has not, means there are some hard questions to answer on real causes. Some are technically hard, like simulating and calibrating hydrologic and hydraulic models to determine infrastructure constraints and upgrades. Cities are doing that. Some are politically hard, like regulating overland flow systems (lost rivers) in developed communities. Some are administratively hard, like expanding the Ministry of Natural Resources and Forestry and Conservation Authority mandates beyond valley natural hazards, and combining with Ministry of Municipal Affairs or Intrastructure ministry interests. These last two are in the hands of the Ontario government.  But unfortunately Kahneman is right, as people are not accustomed to thinking hard, increasing rainfall is a plausible judgment.
Posted by Flood Advisor