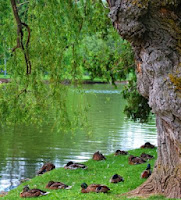 Overland flood risks in urban areas are related to a couple of simple factors: i) how much water is running off and ii) does it have somewhere safe to go (i.e., not into your home or business).

Both of these factors can be determined qualitatively by i) identifying the drainage area that contributes runoff toward the overland flow path (or the major drainage system as it is called), and ii) evaluating whether the flow path is free-flowing, or alternatively whether it is obstructed by barriers to flow and therefore subject to ponding or 'back-up' along the surface. 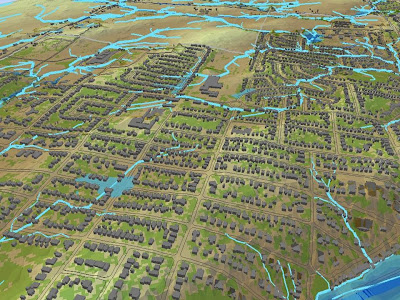 This 3D image shows an elevation model along the north side of the Avon River in Stratford, Ontario.  Thicker blue lines show flow paths with large runoff areas (more runoff and higher risks), while narrow lines show flow paths from smaller areas (less runoff and lower risk).  These lines are generated using Geographic Information System (GIS) functions considering the underlying ground elevation model.  The lines do not show the width of flow, just the centreline of the flow path.

Areas with no continuous slope toward the river are show as blue 'ponds'.  These areas reflect sags in the ground surface and indicate how deep water must pond before surface flow is free flowing again.  The GIS terminology for these depressions is 'sinks'.  Like the flow paths, these sinks only show potential flood risks - e.g., if the storm sewer system below the surface is oversized, it may prevent ponding in the risk area. 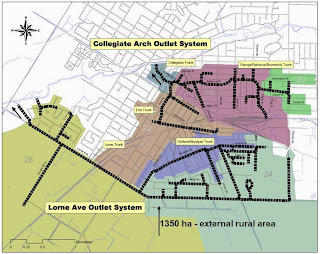 Notwithstanding the limitations of qualitative risk assessments for overland flooding, there is no doubt that large drainage areas and limited grading toward a safe outlet are important factors in urban flooding risk. The proposed class action lawsuit area in Stratford following the July 28, 2002 flood was generally bounded to the north by the Avon River and Lake Victoria, to the east by Romeo St., to the south by Lorne Ave. and to the west roughly by John St.  This higher risk area is characterized by very large external drainage areas and limited overland slopes.

Specifically in Stratford, a large 1350 ha external area is partially intercepted on Lorne Avenue and then diverted, westward away from the high risk class action area.  During large storms however the diversion sewer could be overwhelmed, sending flood water northward.  The Dufferin/Brydges Trunk is characterized by very mild slopes and limited overland flow relief - it was reported that streets like Brydges, Inverness, Norfolk and Whitelock were among the most impacted in 2002.

Similarly, Romeo Storm Trunk Sewer (aptly named in Stratford) used to be Romeo Creek ages ago and has been enclosed, posing further overland flow limitations in the south side area.  The trunk sewer is said to run directly under the Avon Theatre, potentially offering special effects during performance of Shakespeare's The Tempest.