Flood losses in North America do not seem to be increasing when growth and inflation are considered. That's good news, suggesting newer development is more resilient.


The normalized, inflation-adjusted losses for hydrological events have peaked in 1990's, e.g., due to the Great Flood of 1993. How about considering the 2017 hurricanes experienced? The losses of Hurricane Harvey, Maria, and Irma are tracked as meteorological events as shown in the following charts:
Data shows that relevant and catastrophic losses peaked in 2005 due to Hurricane Katrina. Actual, unadjusted losses were higher in 2017 than in 2005, but when adjusted for inflation 2005 losses were near 2017 values - and when GDP growth is considered, 2005 values exceed 2017.

It is common for losses to be reported without adjustments. Making adjustments to normalize losses considering growth in net written premiums (i.e., higher losses are expected with growth in insurance market - more policies, more premiums, more payouts and claims). This was explored in my paper published earlier this year:

The Geneva Organization's recent report Understanding and Addressing Global Insurance Protection Gaps illustrates changes in uninsured losses as a share of Gross Domestic Product (GDP). As stated in the report: "Over the past three decades, the share of worldwide uninsured losses in global GDP
has decreased from 0.31 to 0.19 per cent. For high-income countries, the share fell from 0.20 to 0.13 per cent. Upper middle-income countries show a reduction from 0.21 to 0.11 per cent". The significant decreases appear small on the chart, due to the logarithmic scale on the y-axis. 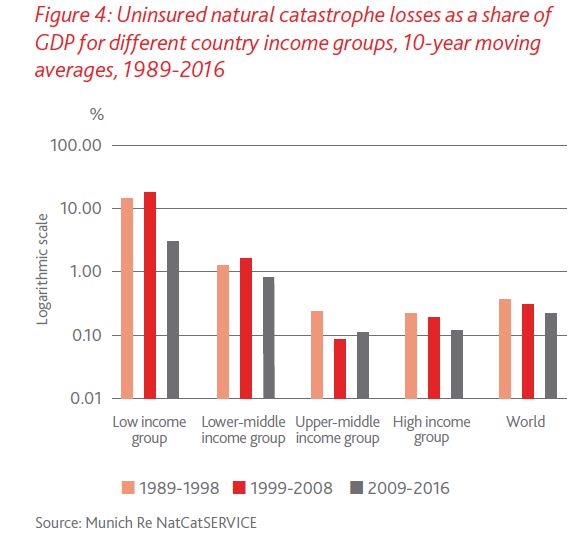 More resources? The initial charts above were from reports prepared using the online NatCatSERVICE.

Similarly, this is a link to the report on those losses from meteorological events: Meteorological Losses North America 1980-2017

***
How about Canadian trends? The following NatCatSERVICE chart was provided by Munich RE specifically for Canada. It shows some increasing trends in losses after accounting for inflation just as the chart above with Canadian catastrophic losses normalized by growth in net written premiums. 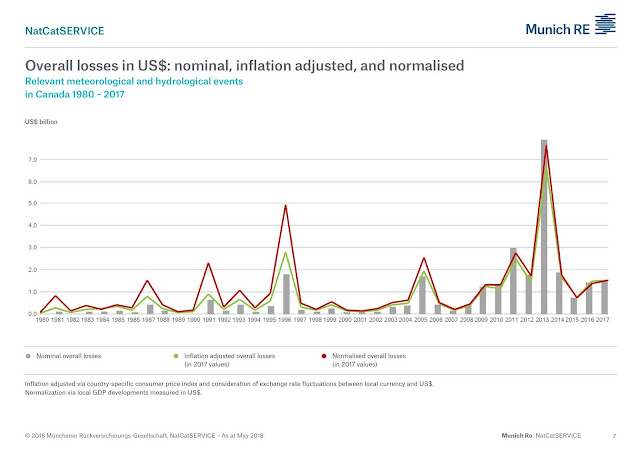 Looking at data from the Insurance Bureau of Canada including loss data and net written premiums, we see both of these values increasing in recent decades as shown below. 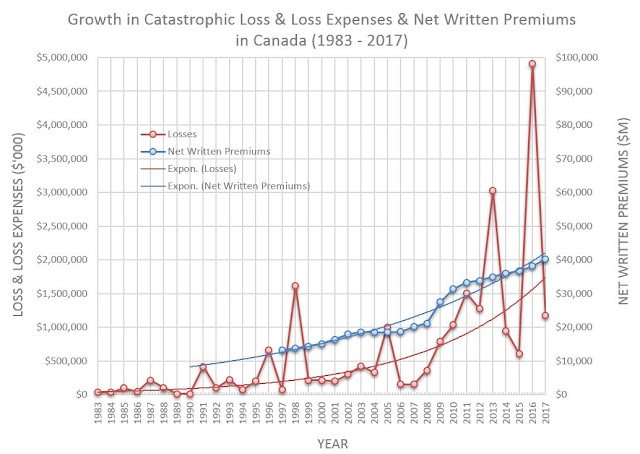 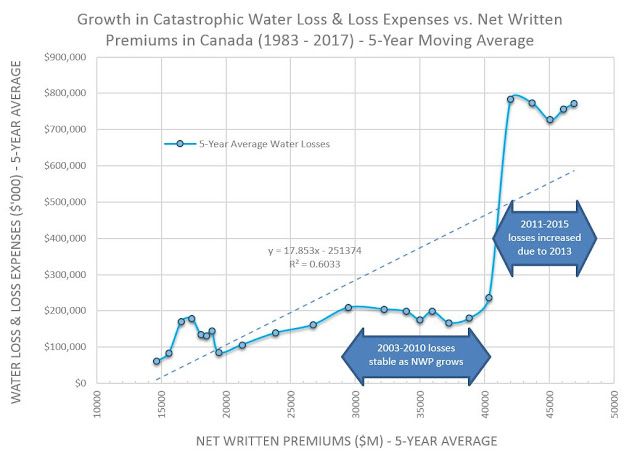 Other factors affect risks and losses. Urbanization is a key factor increasing runoff and risks and this has been documented in key case law in Ontario (see previous post with factors). That is, hydrologic stresses increase due to the expansion of urban areas and the intensification of development within urban areas. Other factors include hydraulic constraints in infrastructure systems that can degrade over time - these include natural factors such as blockages of sewer pipes due to build-up of calcite, sediment, roots, FOG (fats, oils, grease), or engineered modifications to collection systems that hold back wastewater flow during wet weather to prevent spills in watercourse - these modifications can in some cases aggravate back-up risks in the wastewater collection system.

Also see previous post - Catastrophic Losses in Canada - Have Flood Damages Increased Significantly Or Have Changing Data Sources Affected Trends?
***
The Government of Canada has found that the majority of loss increases have been due to growth, and climate change 'may' be having an effect - this is reiterated in the just-released Canada in a Changing Climate: National Issues Report (see post: https://www.cityfloodmap.com/2021/06/national-issues-report-identifies.html). Canadian loses have been normalized for growth show a moderate increase over time - the report notes that earlier data may be incomplete, which would affect the normalized trend.
Posted by Flood Advisor