Accounting for future climate change impacts is recommended in Ontario policies and regulations. A review of these drivers was described in a recent presentation as follows: 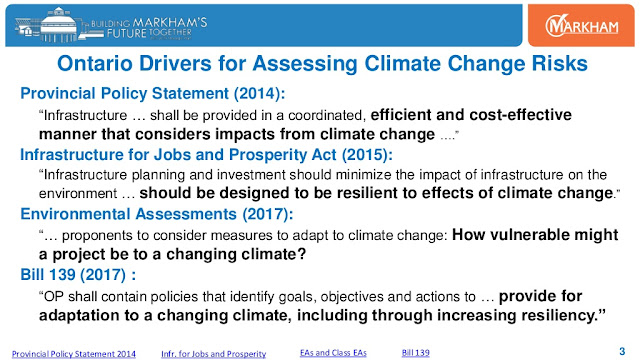 How are stormwater management and wastewater engineering professionals accounting for these impacts practically to meet the requirements of the Provincial Policy Statement, the Infrastructure Jobs and Prosperity Act, Environmental Assessment requirements and Planning Act amendments in Bill 139?  They are taking a couple of simple approaches: i) adjusting intensity-duration-frequency (IDF) curves to account for potentially higher future rainfall intensities, or stress testing systems with such higher intensities, or ii) stress testing systems with conservative hyetographs, i.e., rainfall patterns, in hydrologic and hydraulic simulation models.

Some examples are as follows:

Markham evaluated the resilience of its wastewater collection system considering historical storms with a climate change adjustment (adding 30% to rainfall intensities) and its Chicago storm.  The Chicago storm hyetograph was determined to me more conservative than the adjusted historical storms and was deemed to account for future climate change effects as well as other uncertainties.  Results were presented at the WEAO 2018 annual conference.

Markham evaluated the resilience of a flood-prone stormwater collection system considering local IDF data, and its 3-hour AES design hyetograph. The 3-hour AES design storm intensities were above local IDF intensities, and the local and regional trends in intensities were found to be decreasing. The use of the 3-hour AES hyetograph was determined to be sufficient to account for future climate change impacts, as discussed in the 2019 Don Mills Channel Class EA study report.

Stantec developed the Windsor/Essex Region Stormwater Management Standards Manual in 2018. The manual includes a review of IDF trends and concludes "design standards should continue to rely upon the long-standing historical data provided by the Windsor Airport station" and that a “stress test” event, a 150 mm rainfall event be applied to assess vulnerabilities and any design adjustments to mitigate unacceptable risk - for new development unacceptable risk would include water levels above lowest building openings on a site. Therefore, IDF values have not been increased in design, but a practical stress test is applied to assess risks and adaptation requirements.

Ottawa reviewed its IDF data in 2015 and found increases and decreases in IDF intensities at different durations and "that the percentage differences in intensities between the IDF curves is within the margin of error associated with data collection and hydrologic assessments, it was ISD’s opinion not to update the OSD IDF curves." A check storm is considered based on climate change research: "The storm sewer system performance also has to be checked for historical storms as well as a 20% increase in the 100 year rainfall volume for climate change stress testing. For these events, there is no requirement for a free board between the footing elevation and the hydraulic grade line elevation."

These municipalities have incorporated a “20% allowance in the historical data of 1 in 100
year storm-major stormwater system” (Mohammed, 2016).

In 2011, based on University of Western future climate projections, the City of London resolved to  "increasing the City's existing Intensity Duration Frequency (IDF) Curves by 21% and that Civic Administration BE DIRECTED to incorporate this change in a phased approach starting with the subwatershed studies outlined below and ultimately adjusting other design standards, planning and Official Plan considerations in dialogue with interest parties".

"Predicted storms with durations less than 6 hours are less intense than those observed in 2007, for all return periods. Longer duration storms do not always hold to this pattern, with the 6 and 24 hour storms often predicted to become more intense, particularly in Northwestern Ontario. The magnitude of the difference in rainfall precipitation between the IDF curves, which are based on historical data and those developed from climate models, can be quite significant."

It also found in bias-corrected future climate models both predicted increases and decreases: "In some areas rainfall intensity increased from 0% to just above 30% where in other areas there were rainfall intensity reductions in the from 2 to 10%."

The impacts of a 30% increase in flow rates was found to have limited affect on highway drainage infrastructure:

"Based on the analysis of samples of highway infrastructure components there is demonstrated resilience of MTO drainage infrastructure to rainfall increases as a result of predicted climate change scenarios. An overwhelming percentage of the storms sewer networks tested appeared to have sufficient excess capacity to hand the increases in design flow rates up to 30%. Similarly, the sample of highway culverts analysed showed adequate capacities, for a large percentage of the culvert, to handle the rage of low rate increases investigated without the need to be replaced. The bridges tested also appeared to suffer no risk to structures as a result of the flow increases."

"Designers are to exercise engineering judgement to determine whether the infrastructure will meet current and future design criteria through appropriate sizing of the infrastructure or through providing allowances for future adaptation measures."

However, it is noted that MTO does not necessarily adopt the future IDF curve for design and accepts "providing allowances" to adapt to those conditions in the future. This adaptation approach is consistent with the American Society of Civil Engineers' recommended Observational Method approach to managing uncertain future climate risks (see previous post).
Posted by Flood Advisor